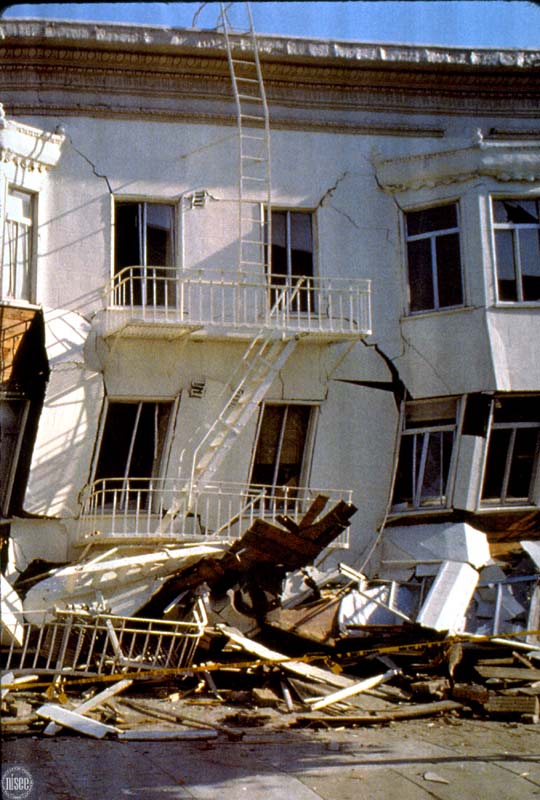 A soft-story apartment building after the 1989 quake. Photo courtesy of NISEE-UC Berkeley.

It’s the resolution season: the time of year for gym promotions, salon coupons and the general swearing off of holiday excess. But while you look to help yourself start over in the New Year, don’t forget about your home – which could need more of a makeover than meets the eye. And with Wednesday’s 5.8 earthquake along the California-Mexico border, the element of surprise most quakes bring is not one for which you want to be ill-prepared.

Local experts released a report earlier this year  identifying thousands of residential buildings in the city that a major quake could render unlivable – and that was just based on a partial survey.  And with seismologists saying that  there’s a 63 percent chance the Bay Area will suffer a powerful earthquake within the next 30 years, there is a need to act soon to remedy the problem.

Although  a major quake is  inevitable, experts say the scope of its impact isn’t. Following the recent  20th anniversary of the 1989 Loma Prieta earthquake, city officials and building engineers are emphasizing some preventive steps that ordinary citizens can take.
What’s a San Franciscan to do? Start with these tips:

Because of San Francisco’s proximity to several major fault lines and the poor soil common in some neighborhoods, the city will always be vulnerable to seismic damage. But construction plays a key role in how a building responds during an earthquake. The San Francisco Department of Building Inspection considers residences built after May 1973 to be relatively earthquake-safe, as they comply with current building codes. Older residential buildings, however, weren’t made to the same standards. Without upgrades, some of them are downright dangerous.
After a five-year hiatus, the city this year revived a project to survey buildings in the city. The Applied Technology Council, a nonprofit heading the city’s Community Action Plan for Seismic Safety project, released a report in February that focused on older multi-unit wood-frame buildings. The council identified 4,400 privately owned buildings that may have a “soft story” – a ground floor made unstable by large open spaces, such as garages or commercial window fronts, and weak supports. Many of the buildings the 6.9 magnitude Loma Prieta quake leveled in the Marina District were soft-story structures.
In the event of an earthquake, “a little bit of retrofitting goes a long way,” especially for old buildings that have never been upgraded, said William Strawn, DBI communications manager.
According to Strawn, city officials don’t know the exact number of seismically unsafe residences in the city, and they haven’t identified the locations with the highest concentrations of vulnerable buildings. While the Community Action Plan project and some nonprofit and non-governmental groups are working to gather more data and map retrofits, there’s a lot of work to be done.
If you’re unsure of the seismic safety of your own home or apartment, you will likely want  to contact a structural engineer who can make an assessment. The Structural Engineers Association of Northern California, a professional association, maintains a referral list of some of its members and the services they offer – although structural engineers can also easily be found online or in the phone book. You can confirm that a particular engineer is licensed by the state via a verification search on the California Board for Professional Engineers and Land Surveyors Web site.
If you rent, a property manager should be able to tell you if your building has an engineer to ask about retrofits, according to Strawn. If you’re buying a home, the seller is required to provide you with a “3-R” report  – the Report of Residential Building Record – which contains a building profile and information about permit and construction history. It’s also possible to look up a residence by address or lot number on the DBI Web site, which will display any permits, complaints, or other documents associated with the property. However, DBI data is limited, and the information may not give clues about seismic retrofits.

While there’s no question that retrofits could make many homes in the city safer, a looming question is how to finance them – especially in an economic climate where few feel they have dollars to spare.
District 4 Supervisor Carmen Chu said that her office is drafting legislation that would allow the city – pending voter approval – to borrow money to make loans for homeowners making seismic upgrades.
The legislation would seek “leftover” funds from a $350 million bond measure voters approved in the early 1990s. The money was intended to finance loans to cover mandatory retrofits for about 2,000 privately-owned “unreinforced masonry,” or brick, buildings. However, due in part to restrictive loan terms, most of these funds were never used – building owners instead sought commercial loans.
According to the DBI, roughly $270 million of the bond money was never spent. Chu emphasized, however, that these funds are “left over” in name only, as the city never borrowed the full $350 million.
“There is no sitting pot of money” remaining from the fund, she said.
What new legislation would seek, then, is voter approval to obtain the funds that weren’t borrowed before in order to pay for seismic retrofits now. Most likely, legislation will propose expanding the reach of a loan program to fund retrofits to multiple types of buildings, rather than just those made of unreinforced brick. However, Chu said her office is still discussing how best to modify the use of funds.
“We’re still in the beginning stages of refashioning it,” she said, adding that there remains “a lot of wrinkles that we need to work through.”
Mayor Gavin Newsom has signaled that he might support a mandatory program requiring some soft-story building owners to make seismic retrofits. However, a spokesman for the city attorney’s office said he was unaware of any such legislation currently being drafted.
According to the DBI, city officials also have discussed creating an incentive program for building owners to retrofit voluntarily. Strawn said incentive ideas include exempting property owners who retrofit voluntarily from making additional seismic upgrades for 15 years and waiving plan review fees – fees paid to the city to review whether retrofit plans comply with building codes. Depending on the size of a building, waiving these fees could potentially save owners between $750 and several thousand dollars, Strawn said.
Still, earthquake retrofitting is costly. Full upgrades, particularly to multi-unit buildings, can easily amount to tens of thousands of dollars and construction can last months. For buildings with commercial space on the ground level, this can also mean suspending a business for the length of construction time.
Rental properties also raise the question of who should pay for retrofits – renters or owners – which has been a contentious issue in the past. The burden of paying for upgrades typically falls on building owners, and rent control makes it difficult to pass portions of the cost on to renters.
“I think that’s definitely a problem the city has to solve,” said Laura Samant, associate project manager for the Community Action Plan project.
The Applied Technology Council’s report estimated that recommended upgrades to some multi-unit (five units or more) soft-story buildings could run owners between $60,000 and $130,000 in construction costs. Strawn said that the cost of retrofits to individual homes varies widely, making it difficult to estimate an average. But it wouldn’t be unusual for full upgrades to total about $20,000 per unit, he said.

Web sites such as  the city’s 72hours.org give basic information and helpful tips for emergencies, including how to adapt to limited mobile phone service (text instead of calling; record an outgoing voicemail message so that callers know you’re safe). It’s also possible to register wireless devices and e-mail addresses online to receive updates from the city during an emergency. The site recommends making a “family plan” and supply kits for earthquakes and other emergencies, keeping duplicates of important documents off-site, and making specific plans for people with special needs.
If you’d like to learn more about earthquake response, groups like the San Francisco Fire Department’s Neighborhood Emergency Response Team provide free, hands-on trainings in preparedness. PrepareNow Partners is an alliance of Bay Area community groups that focuses on disaster planning for vulnerable populations and people with special needs.
Other helpful resources and sites:
Applied Technology Council February 2009 report
The Association of Bay Area Governments
The San Francisco Planning and Urban Research Association
Concrete Coalition
Earthquake Engineering Research Institute
Community-generated map of retrofits since 1989
PrepareNow Partners – Yerba Buena preparedness
New York-based preparedness blog

Lizzy is a native San Franciscan who has worked as a journalist in Southeast Asia, Guatemala and the Bay Area. At the Public Press she has covered health and budget-related news.