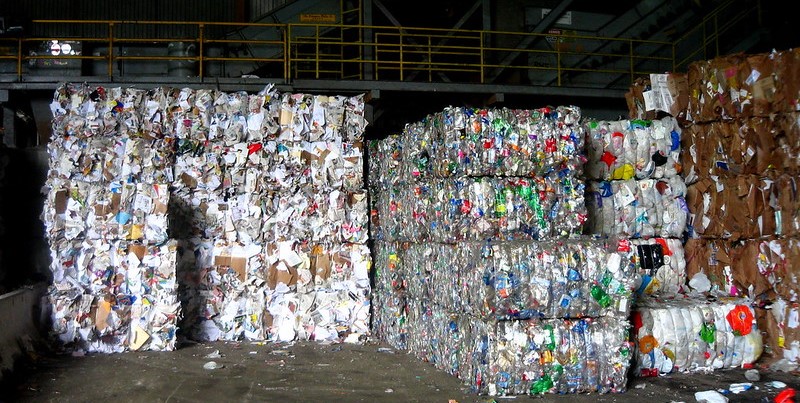 Bales of paper, plastic and cardboard stand ready to be shipped out from the San Francisco Recycling Center.

The San Francisco civil grand jury conducted its investigation in the wake of China’s 2017 decision to severely limit the type and quality of foreign recyclables it would accept. Most plastics were banned, and other waste was required to be almost pure. The little bits of food, liquid and other non-recyclable material that inevitably end up in processed bales of recyclables could make up no more than 0.5 percent of the total. Recycling facilities around the world scrambled to meet the new standards or find alternative markets. More material ended up in landfills and incinerators, and some facilities closed altogether.

San Francisco suffered less than others. In the years before China’s ban went into effect, Recology — the privately-owned company that has a monopoly over residential and commercial waste-collection in the city — typically recycled around 85% of the waste from the blue bins. That number has dipped only a few percentage points since. However, San Francisco still creates a lot of trash. In 2018, just under half of all waste collected by Recology ended up in landfills and incinerators.

One reason the city has been able to maintain a relatively high rate of recycling is Recology’s state-of-the-art sorting machines, which produce higher quality bales of material, according to the company. That equipment has enabled Recology to continue shipping San Francisco’s recyclables around the world, even as markets tighten their requirements.

“While China is no longer an option, you can be confident that San Francisco will be able to continue to move its sorted and baled recyclables,” Recology spokesman Robert Reed wrote in an email. “San Francisco has a strong reputation with mills and other buyers of recycled materials for producing very high-quality bales of recyclables.”

How recyclables get handled

The market for recyclables changes over time, but the grand jury report presents a snapshot of what waste ends up where. As of spring 2020, paper and cardboard, which account for 75 percent of San Francisco’s recyclables, are sent to countries in Southeast Asia. Glass is processed in the Bay Area, while steel and aluminum are shipped to domestic foundries. Plastics, which make up 5 percent of recyclables, are a mixed bag. High-value plastics are recycled domestically, while low-grade plastics go to Southeast Asia.

The absence of this information on any publicly available platform led the grand jury to its first recommendation, that the San Francisco Department of the Environment establish a web page with regularly updated statistics, which should also be accessible on Recology’s existing mobile app.

“If people are reassured that the stuff is being handled properly, they’re more likely to participate in the process,” said grand jury committee chairman Jonathan Gohstand.

The grand jury’s second recommendation relates to the confusion many San Francisco residents feel over which items belong in the blue bins.

One of the grand jury’s findings was that a list of what not to recycle should be available. That includes items like plastic foam and shredded paper, which are so small and light they fly off the conveyor belt. To prevent contamination, recyclables should consist of a single type of material — cardboard, glass, plastic, etc. — and be reasonably clean and dry, according to the report.

The hope is that these guidelines will cut down on the 19 percent of recycling that still ends up in landfill, along with the rest of the city’s waste.

San Francisco’s “zero waste” goal, adopted in 2003, called for the city to reduce waste sent to landfill or incinerators to zero by 2020. That target proved impossible to meet, and in 2018 Mayor London Breed scaled back the city’s immediate ambitions, pledging to reduce total waste generation by 15 percent and disposal to landfill by 50 percent before 2030.

While residents can help by reducing waste and reusing as much as possible, there is an increasing recognition among politicians of the role manufacturers must play.

“Private industries need to push the envelope of sustainability and design products to be recyclable or compostable,” environment department spokesman Joseph Sweiss wrote in an email. “Otherwise, waste to landfill will continue to persist.”

Places like Canada and the U.K. have already implemented taxes on plastic manufacturers, aimed at increasing the use of recycled material. But measures that place responsibility on manufacturers have failed to gain traction in the U.S.

In August, after extensive industry lobbying, the California Legislature failed to pass bills that called for a 75 percent reduction in single-use plastic packaging and products, and would have required such products to be entirely recyclable or compostable by 2032. Opponents of the bill claimed it did not address the root of the problem, which they described as outdated and ineffective infrastructure, and would disproportionately impact underserved communities. Recology is sponsoring a planned 2022 ballot initiative that calls for similar restrictions, in addition to a penny tax on single-use plastic packages.

While smaller measures like bans on plastic bags and straws attempt to address the waste problem, sweeping legislation seems necessary to solve it. “It’s all a question of scale,” said the grand jury’s Gohstand. “There are a lot of things you can do, but they’ll make such a small difference because the volumes are so high.”