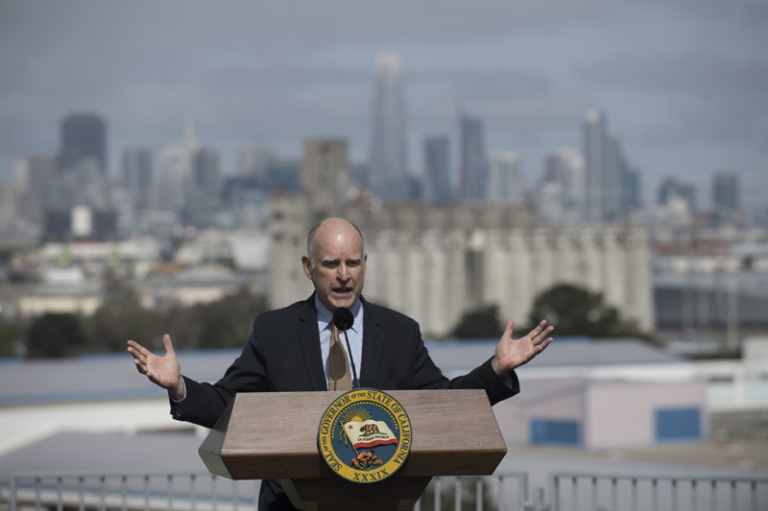 Gov. Jerry Brown at the Sept. 29 signing ceremony for legislation sponsored by San Francisco lawmakers that would speed construction of affordable housing by relaxing long-standing environmental rules. Photo by the Office of the Governor

Revising the act, known as CEQA, will make it easier for real estate interests to build “infill development” housing projects, though the law was written in such a way as to restrict local environmental review of almost any project in dense urban areas where housing is in short supply. Infill areas are places that local governments have prioritized for new homes that are flush with bike lanes, public transit and walking commutes.

For example, a large swath of the Mission Bay neighborhood of San Francisco received a site-wide review in 1998, but until now, projects like the the $1 billion Warriors arena opposite San Francisco Bay also required individual assessments.

Back in 1998, the threat of rising sea levels didn’t register strongly with urban planners. Today, it’s widely established that the neighborhood’s entire shoreline will need to be protected in the coming decades. While problematic at times, the site-specific environmental review of buildings for the Warriors, the University of California, San Francisco, and others all included some flooding analysis that incorporated this new science.

Howard Penn, executive director of the Planning and Conservation League, said his statewide environmental lobbying association had wanted to support the bills out of concerns for the growing cost of housing statewide. But then legislators, in negotiation with lobbyists for the development community, softened provisions of Wiener’s bill that were designed to prevent suburban sprawl. The turning point was a concession by developers to increase construction workers’ wages in exchange for softening the streamlining requirements.

“In the end, the infill definition was watered down,” Penn said. “We wanted to. We were at the table for months, but we couldn’t support it.”

Not all environmental groups opposed the effort to lift regulations on developers. The Natural Resources Defense Council said the changes would lead to the rapid construction of affordable housing in cities, and ease the pressure to build in less-dense areas that consume more land and increase pollution from longer commutes.

“Skyrocketing housing costs have pushed too many Californians farther and farther away from jobs, transit and services,” Amanda Eaken, the organization’s director of transportation and climate, said in a statement. She said that by providing funding to build affordable housing and encouraging development in infill locations for existing cities can strengthen their infrastructure. “The lack of affordable housing is not only an equity issue, but an environmental one, resulting in increased congestion and air pollution.”

One exemption was issued recently, though not for housing. Last month, the San Francisco Planning Department determined that a proposed 10-story hotel at 1055 Market Street, site of the former Kaplan’s Surplus, would not affect the environment and could forgo the lengthy review process.

The state’s environmental laws could be weakened three ways:

During negotiations on Wiener’s bill, the boundaries for areas where developers can take advantage of streamlining measures were widened to include areas outside the urban core.

The original form of the bill required that any development eligible for streamlining would need to be 100 percent in an infill development area. This was later reduced to 75 percent. “If you stick things at the edge of a site, then it’s not infill,” Penn said. “Development will be creeping further and further out. That was our concern.”

Other environmental advocates disagreed. Even in its watered-down form, David Pettit, a senior attorney with the Natural Resources Defense Council, supported the bill. He said the measure amounts to a trade-off in which the state allows for some streamlining in exchange for encouraging more people to live near mass transit.

The environmental review process is designed to study a long list of potential hazards, such as future flooding from rising sea levels or the threat of wildfires. But Pettit said that the streamlining measures apply only to infill developments that have been previously identified as a local priority zone.

Pettit said cities often consider environmental hazards such as earthquakes in deciding whether an area should be a priority. Other important public safety concerns are not always included. For example, a map of San Francisco’s designated infill area includes the San Francisco Bay shoreline, which is threatened by rising sea levels.

Chiu’s bill initially included coastal areas in the streamlining program, another sticking point in negotiations. Advocates said lawmakers in the past have offered ample exemptions from similar streamlining efforts in coastal communities Without site-specific review, policymakers and neighbors could remain in the dark about environmental issues surrounding new projects.

“When you bypass community input you are opening yourself to many impacts that you can no longer mitigate,” Penn said. Although the Coastal Act could still apply to these projects, Penn said the legislative package was vague on this point and he encouraged state lawmakers to use more precise language for defining which sensitive areas to protect. Wiener’s bill cutting CEQA reviews in jurisdictions not meeting their housing goals includes exemptions for coastal areas that many advocates had hoped for.

The Chiu bill changes state law to allow local governments to designate “housing sustainability districts.” Cities are eligible to receive funding from the state to perform sweeping neighborhood-wide environmental analyses in development zones, saving developers millions of dollars and potentially years of delays they would ordinarily face through the standard local review process.

Chiu, who lamented “the worst housing crisis our state has ever experienced,” lauded the Legislature for passing more than a dozen bills streamlining regulations and raising revenue, including a new fee on real estate transactions to fund affordable housing and another measure that puts a $4 billion bond on the November 2018 ballot.

The Sierra Club opposed Chiu’s bill, saying project-level review, rather than neighborhood-wide review, allows for a clear understanding of the environmental effects of each development and is “necessary to protect California’s environment and public health.”

A Senate Committee on Environmental Quality analysis of Chiu’s bill called exemptions for review of specific development project “an unnecessary trade-off” and recommended that they be removed. The exemptions were not dropped from the final legislation.

A review of one of the other measures, Senate Bill 540, written by Sen. Richard Roth, a Democrat from Riverside, stated that site-specific streamlining exemptions create a two-tiered system in which moderate- and upper-income homes are protected from environmental hazards while affordable and low-income homes are not.

The committee’s review questioned whether offering an exemption from CEQA review in exchange for a percentage of affordable housing was prudent. Environmental hazards do not disappear if no one scrutinizes them. The exemptions deprive the public of an opportunity to weigh in on individual projects.

“This provision essentially provides that it is acceptable for the financial costs of a project to outweigh potential impacts to public health of people of low-, moderate-, and middle-income households,” the analysis states.

In a statement, Roth said that requiring separate reviews for multiple projects in the same area of a city “can result in costly project delays and serve as a disincentive to housing construction.” His bill will allow cities to designate streamlined regulations in “workforce housing zones.”

Pettit from the Natural Resources Defense Council said that while the reform creates a tiered system treating affordable and market-rate housing differently, he thought it was worth the trade-off. “There is an affordable housing crisis and this is one tool that may help to fix it,” he said.

Real estate interests and political conservatives have long vilified the California Environmental Quality Act. But it was self-identified progressive Democratic lawmakers who led the charge over the summer to carve out the exemptions.

They were responding to a raft of studies pointing out the growing gap between housing construction and the growing need in urban areas where jobs are located. A recent analysis from the nonpartisan Legislative Analyst’s Office found that California should be building 100,000 more homes each year than it has been in recent years to keep up with housing demand.

“California’s high housing costs are strangling our state’s economy and environment and undermining our health and quality of life,” Wiener said. “We’re past the point where communities can choose whether to create housing or whether to opt out. All communities need to participate in creating the housing we so desperately need.”

Others argue that the streamlining measures will further displace some ethnic communities.

A uniform policy to expedite all development is based on the concept that more building equals lower housing prices. While this may be true long-term on a regional or statewide level, this concept tells only half the story, as it fails to add into the equation how market-rate developments are often a short-term catalyst for displacement of low-income communities of color. When market-rate developments are built in these communities, they are likely to be at price points that are completely out of reach of local residents, making these developments essentially luxury housing.

Richard Frank, director of the California Environmental Law and Policy Center at the University of California, Davis, welcomed the legislative package and applauded the bipartisan nature of the bill, though he does not see it as a panacea. He said the changes ameliorate a part of environmental law that he believes has exacerbated the shortage of affordable housing.

“Part of the problem is that affordable housing and middle-range housing have been over-scrutinized in some quarters,” Frank said. “The environmental laws have been used to block projects not on environmental concerns but character of the neighborhood concerns, which is a thinly veiled euphemism for not wanting people of a different color or income level intruding into the previously de facto segregated area.”

Silicon Valley Leadership Group CEO Carl Guardino told the Mercury News that the Legislature “has opened the door for more affordable rental and for-sale homes throughout our state.”

The Public Press reported in its spring 2017 issue, Wild West on the Waterfront, that the California Building Industry Association pursued a strategy to undermine key provisions in CEQA that San Francisco had been using to protect its shoreline against rising sea levels. The organization has been posting on its Twitter feed with the hashtags #CAHousingSystemIsBroken and #BuildMoreHousing, and boosting messages that argue for wholesale changes to the environmental law.

Developers and some legislators, including Assemblyman Vince Fong, a Republican from Bakersfield, blamed CEQA for the lag in housing construction. In an opinion piece published in the Bakersfield Californian, Fong called for further reform.

“There is no doubt that CEQA is one of the most significant factors that makes it so difficult to build the appropriate water, transportation, and housing infrastructure that can adequately accommodate the most populous state in the nation,” Fong wrote.