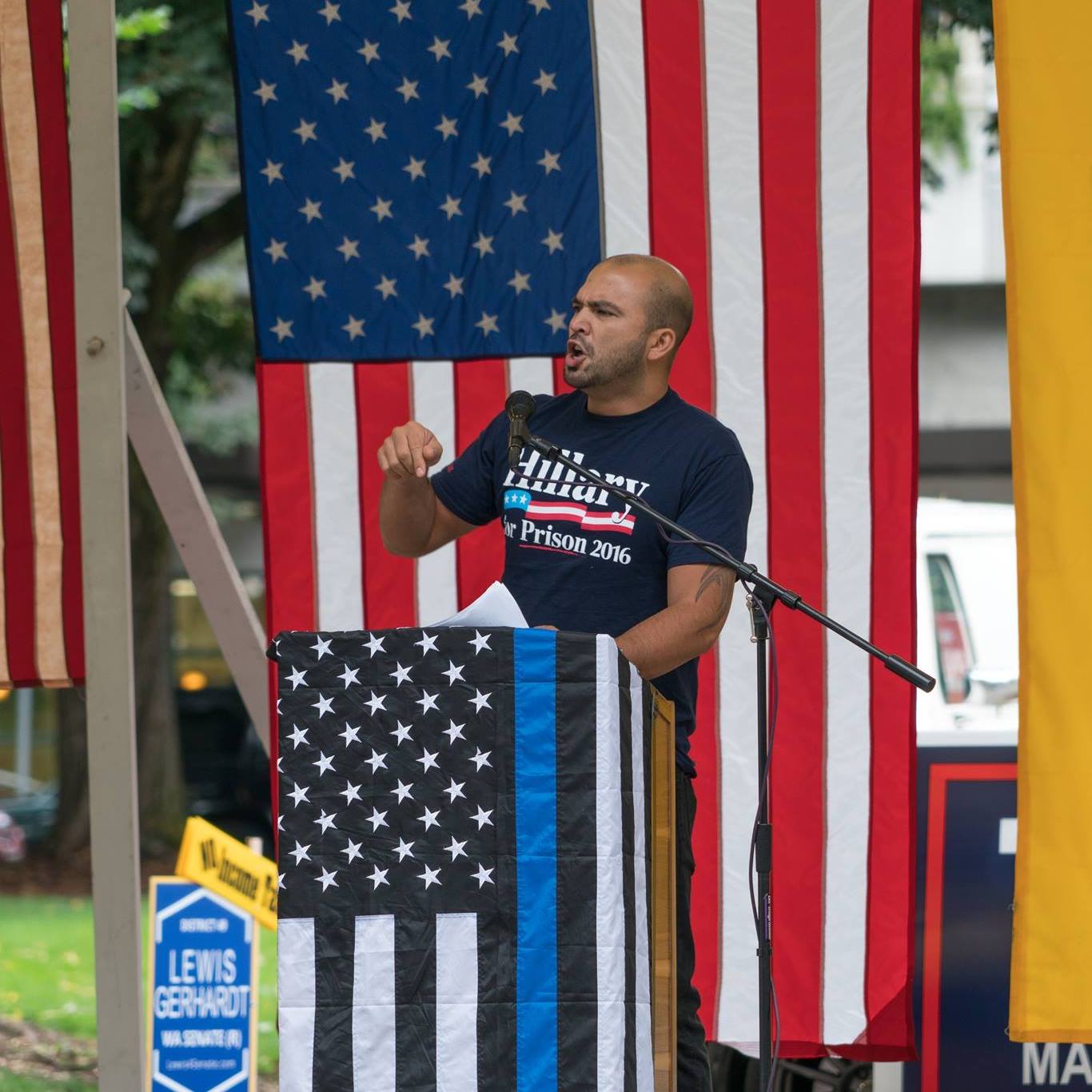 Update at 3:49 p.m. PT: Organizer Joey Gibson says he is canceling the Crissy Field rally on Saturday and will instead hold a 2 p.m. press conference in Alamo Square, several blocks from a planned Civic Center counterprotest. “We asking the city to keep us safe,” Gibson said on Facebook.

Update at 9:10 p.m. PT: Gibson has relinquished his permit for the Patriot Prayer rally, the National Park Service said Friday night. Presidio road closures will be lifted and Crissy Field will be open Saturday, along with nearby businesses.

“After several conversations with the police, and understanding the situation, we’ve decided that tomorrow really feels like a set-up,” Gibson said earlier on Facebook Live. “A lot of people’s lives aren’t going to be safe. The rhetoric from Nancy Pelosi, Mayor Ed Lee, the media, all these people are saying we’re white supremacists, bringing in tons of extremists, and it just seems like a huge set-up, so we’re not going to fall into that trap, we’re not going to rally at Crissy Field.”

Joey Gibson has one goal in mind with his rally Saturday at Crissy Field: to attract San Francisco’s moderate, “good liberals” to his “free speech” message targeting government corruption and what he sees as hateful intolerance on the left and right.

The 33-year-old Japanese-American holds events in the name of Patriot Prayer, which is often called an organization but which Gibson described as a philosophy. A vocal campaigner for President Donald Trump and his “Make America Great Again” agenda, Gibson says he advocates for nonviolent protest and diverse viewpoints while rejecting extremism on both sides.

Gibson’s peaceful intentions will be put to the test at the Crissy Field gathering, which follows the deadly violence in Charlottesville, Va., two weeks ago and is set against a backdrop of heightened anxiety, inflamed passions and fear.

As a result, city and federal officials are sealing off the Presidio, a former military installation, making it as difficult as possible to get to the event by any means except a long walk as a tactic for reducing the possibility of violence. They are diverting public transportation, cars and bicyclists, with only one access point by foot at Marina Gate — itself a mile from the rally site along the beach. To minimize risk and maximize discomfort, officials are prohibiting 26 categories of items, including all weapons and ammunition, large backpacks, bicycles, helmets, balloons, aerosol cans, sticks of any kind and water that is not in factory-sealed plastic bottles.

Despite his message of “peace, love and prayer,” Gibson has been accused of inciting the violence that accompanied his recent events in Berkeley and Portland, especially through his use of the far-right, anti-government Oath Keepers militia as security.

To some extent, Gibson said, that is true. But he said he does not instigate violence by throwing punches or yelling at others for their opinions.

“I don’t instigate by being a bad person,” Gibson said in an interview with the Public Press. “I instigate just by existing.”

“The shameful, anti-American trend of hate-filled extremist rallies will unfortunately be allowed to continue this weekend in our city,” Lee said in a statement Wednesday after the Park Service approved Gibson’s permit.

Cicely Muldoon, the general superintendent for the Golden Gate National Recreation Area, said in a statement that the National Park Service “cannot deny a permit to anyone planning to exercise their First Amendment rights based on their political stance or beliefs.”

Muldoon added that the park can deny an application for public safety reasons, but law enforcement officials said that issuing a permit with significant conditions would increase their ability to ensure public safety. Park Service law enforcement personnel from around the country will be joined by a massive San Francisco police turnout for the rally, from 2 p.m. to 5 p.m. at Crissy Field Beach.

Counterprotests are planned throughout the city as well, with street closures and parking restriction at Civic Center, where several groups plan to converge.

Pastor Megan Rohrer, who is organizing one of the counterprotests, said the goal is to stand against Gibson’s message and the white supremacists who sometimes attend his events, triggering violence. For example, in an Aug. 6 rally in Portland, members and a local leader of the white-nationalist group Identity Evropa marched with Patriot Prayer and initiated or took part in violent brawls along the way.

Rohrer said that hate speech is not free speech and pointed out that Gibson “incorporates a lot of symbols and the coded language of these white supremacy groups,” which conflicts with his stated message of peace and prayer.

In a mediated conversation on Tuesday, Rohrer addressed this issue with Gibson, along with the fact that his promotional material often includes violent music and images. Rohrer said Gibson is aware of these allusions, so it is hard to believe he is not making them deliberately.

But Rohrer said Gibson does not preach supremacist views, which is part of why counterprotests will occur in the Castro and the Mission, not at Crissy Field. A separate group of activists will still meet Patriot Prayer supporters by the bay.

“I’m not protesting Joey, I’m protesting white supremacy,” Rohrer said, adding that they chose the locations because “we want to make sure that in the places that people are susceptible to hate crimes on a regular basis that there are communities there to support them, that people aren’t out alone.”

In an effort to dispel remaining accusations of white supremacy, Gibson scheduled speakers who range not only in their political views, but are also racially and ethnically diverse like himself — even though he said he does not believe that race should matter.

The event’s Facebook page advertises that speakers include three African-Americans, two Hispanics, one Asian, one Samoan, one Muslim, two women — one of whom identifies as transgender — and one white male.

But Rohrer criticized the choices. One was recently charged with felony assault and another claimed there were too many Muslims in the country.

“Almost every one of these speakers speaks in a way that promotes violence or insinuates violence,” Rohrer said.

Gibson said the various speakers can say “what they want,” but Gibson named several groups that will not be permitted to share their views: neo-Nazis, communists, Antifa (or antifascists), white supremacists and white nationalists. Gibson also said that, unlike some of his past events, the rally has a permit, which allows law enforcement to prevent white supremacists from entering, though critics remain dubious of that promise.
“I’m going to continue bringing moderates together, and I refuse to let politicians, society, hate or all of this stuff silence me,” Gibson said.

He purposely holds events in liberal strongholds like Berkeley, Seattle and his base in Portland, Oregon. Ahead of a peaceful Aug. 13 rally in Seattle, the day after Charlottesville, Gibson explained his philosophy on Facebook:

The West Coast has slowly been infected with communist ideologies throughout our entire culture. It is a belief that the individual is weak and that we are all victims. This is the lie of the century. No matter who you are, we are all amazing people with the ability to do anything that we put our minds to. These liberal strongholds run off of hatred and negativity. Patriot Prayer will bring in a positive message to Seattle that the people are starving for. With light we will change the hearts and minds of those who are surrounded by darkness.

“We try to pick the towns where there’s a lot of intolerance,” Gibson told the Public Press. “The majority of citizens in San Francisco are really just good liberals, you know, who have good hearts and have good morals. The problem, though, in these big cities … the ones that are the most hateful are the loudest.”

“I hope that people can leave the rally understanding how much deception was put in before this rally from the politicians, from certain media outlets,” he said. “Because they were told one thing by certain groups, certain protesters, certain politicians, media and stuff. But then they can come in there and be like, OK, this is not a white supremacist rally.”

Rohrer hopes that the counterprotests will have higher turnout than the rally so they can spread a message of inclusion.

“We want there to be no ambiguity about what is hate speech and what equality looks like,” Rohrer said.

In Berkeley, officials denied a permit for a “No to Marxism in America” rally  on Sunday that was to be hosted by one of the scheduled speakers at Crissy Field, Amber Cummings, who is transgender. Authorities said that the request was filed too late and that Cummings had not provided crucial details, such as proper identification and information on how she would ensure safety at Martin Luther King Jr. Civic Center Park. Thousands of counterprotestors will still attend a “Rally Against Hate” in Berkeley to promote solidarity against intimidation and violence.