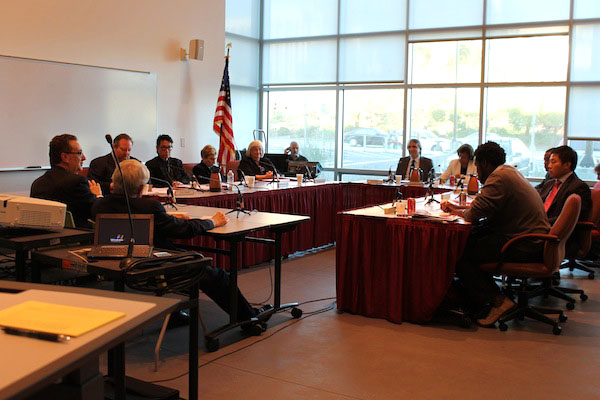 The chancellor of the California community college system came to town to offer some advice on tackling City College of San Francisco’s problems, but found few takers for his counsel.

At a board of trustees retreat this week, Chancellor Jack Scott told students and faculty that the school needs to face “reality.” Last month administrators were warned that the college’s accreditation could end next spring if the school did not enact a long list of changes to management and finances. The management problems follow years of state cutbacks that have reduced administrative capacity.

Scott urged the school to “do less.” Despite the obvious difficulty in downsizing the largest community college in the nation, he said the state’s “fiscal reality” mandated a cut in classes and services. Though Scott’s suggestions have been made repeatedly for the past six years – City College’s accreditation was last reviewed in 2006­­ – those who met with Scott said that his comments ignored the interests and aspirations of the school’s more than 90,000 students.

“We are already doing less,” said Board of Trustees president John Rizzo. “We have 700 fewer classes and less summer school. Our students are taking longer to graduate now. The idea of a two-year community college is becoming less and less viable. This is not a new issue.”

Fellow trustee Chris Jackson also voiced concern that applications were increasing despite the budget constraint: “The state says we need to take in more students. But if we downsize, what happens to those students? We’re the safety net. If you don’t get into a U.C. or a state school, you have someplace to go. What if you don’t get into community college?”

“He talks the same way right-wing Republicans talk,” City College faculty member and Occupy activist Rodger Scott said. “You don’t have to tell adults how to live within their means.”

Jack Scott’s advice comes as he prepares to retire at the end of the month. He hopes one of his legacies will be the Student Success Act of 2012, which seeks to improve completion rates for California’s 112 community colleges and was passed by the state senate in May and the Assembly Higher Education Committee in June. Though the act’s authors have promised that it would create incentives and tools for students to identify, track and complete their academic goals, critics worry it would set low or vague targets to boost the appearance of student learning.

Despite obvious friction between the board of trustees and state administrators, the school is working towards reform that students say has come too late. One initiative is a proposed parcel tax of $79 per property that would bring an estimated $14 million annual revenue to City College for eight years. That measure will be on the November ballot. Former student trustee Jeffrey Fang said the parcel tax has been an option for years, but now it’s one of the last options City College has for quick funds.

“For the past two years, the board has known about the parcel tax option but they’ve been delaying it for their own benefit so it wouldn’t hurt their chances when they ran for re-election,” he said.

Despite the funding the tax could bring, interim chancellor Pamila Fisher has said its revenue would not be enough to cover the school’s mounting costs.

Before the tax is voted on in November, the board must submit a plan for reform in mid-October. Afterwards, the school has four months to implement it or face de-accreditation.

Read interviews with City College students and ongoing coverage from the Public Press via Storify.