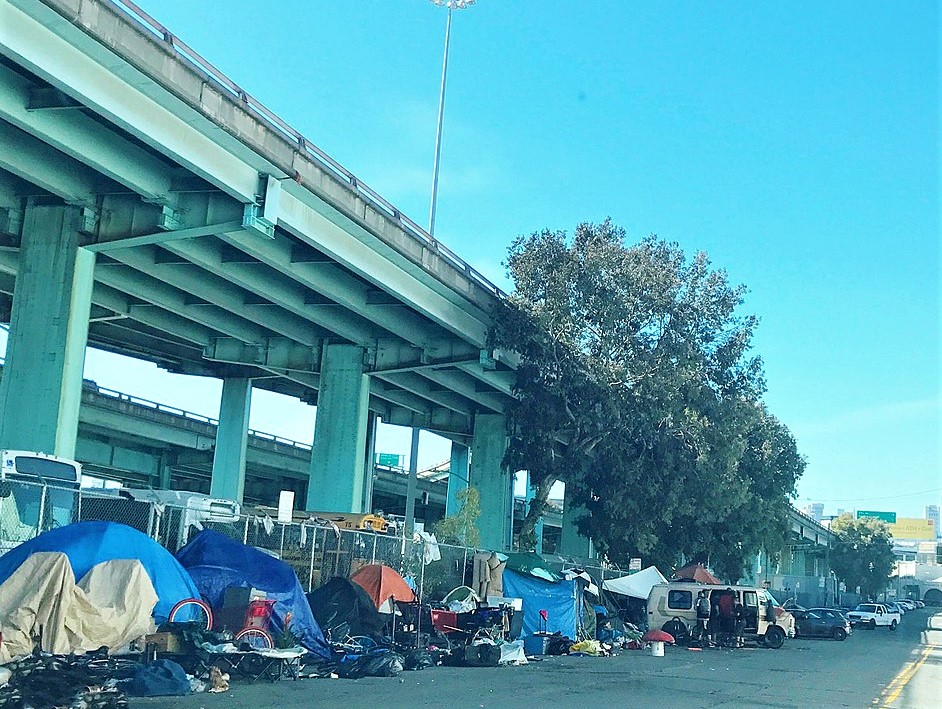 Tents housing homeless residents of San Francisco line a street below the freeway in 2017.

San Francisco’s decision to move more than 2,000 homeless people out of hotel rooms could drive many back onto the streets, leaving them as vulnerable to COVID-19 as they were when the temporary housing program was launched in the spring.

A plan by Mayor London Breed to add more than 1,500 permanent supportive housing units is not projected to be completed for two years. In the meantime, shelter beds are scarce. Prior to the pandemic, the daily waitlist for emergency shelter beds — of which San Francisco has just 1,200 — rarely dropped below 1,000 people. City-approved campsites are limited as well. While 42 potential locations for these “safe sleeping sites” were identified in June, only five have opened.

Nevertheless, San Francisco officials last month announced the city plans to wind down a program that has provided 2,306 hotel rooms for unhoused residents to shelter in place during the COVID-19 pandemic. Despite an expected influx of close to $600 million in cash from a voter-approved tax measure and a promise from the federal government to refund the majority of the costs, the hotel project is simply too expensive to continue, said Abigail Stewart-Kahn, interim director of the Department of Homelessness.

Stewart-Kahn told the San Francisco Chronicle that while some people are being connected to housing, others will be taken to shelters or city-approved tent camps.

Those who work directly with the homeless say this is a step in the wrong direction. “Our primary goal needs to be permanent exits for homelessness, which is housing, housing and more housing,” said Joe Wilson, executive director of Hospitality House, a city-funded homeless shelter.

“Communities across the city have borne the brunt of policies that have not been as successful as we need them to be, in terms of making meaningful investments in reducing homelessness,” he added. “We have an opportunity to do that right now and we should take that; otherwise, we are laying the groundwork for this pandemic continuing.”

Shelters have proven to be a poor long-term alternative to housing. Among unsheltered San Francisco residents, 81 percent have either used or tried to use shelters in the past, only to find themselves back on the street, a study of 584 homeless people conducted this year by the Coalition on Homelessness found.

The health impacts from people returning to the streets could be catastrophic. “The after-effects of homelessness are devastating — trauma, shortened life expectancy, compromised health and real human suffering,” said the coalition in “Stop the Revolving Door,” its report on the homelessness study. “It is both more cost effective and humane to keep San Franciscans housed, instead of addressing it after the fact.”

“Why are there two separate standards?” said Paul Boden, a founder of the Coalition on Homelessness and the executive director of the Western Regional Advocacy Project. “It’s so classist. If you’re homeless, you don’t merit the same dignity and respect as good housed people do.”

The city began renting hotel rooms for people experiencing homelessness in April, after the Centers for Disease Control and Prevention issued a recommendation that people be placed indoors with separate bathrooms to safely quarantine. In the months since, the city leased 28 private hotels, yielding far fewer rooms than many in City Hall wanted. Calls from the Board of Supervisors to expand the offerings to 8,000 beds were not heeded by Breed.

The program, which launched after 92 residents tested positive in an outbreak at the city’s largest shelter in April, appears to have been successful in limiting spread of the disease. No major outbreaks of the virus have been reported in the hotels. However, the COVID-19 pandemic isn’t over. While new case numbers have dropped over the past few weeks in San Francisco, the city is still averaging 46 new cases each day.

In August, the city stopped leasing new hotel rooms, but continued to pay an average of $270 a night for each room already leased, for a total of about $18 million a month.

That’s 30 percent higher than initially projected. In April, City Controller Ben Rosenfield told the Board of Supervisors that the first 2,000 hotel rooms would cost $197 per night, or $11.6 million a month.

The $8,000 monthly cost per room is more than double what a rented one-bedroom unit costs in San Francisco, even during a housing crisis. The city isn’t responsible for all of it; the Federal Emergency Management Agency is expected to refund the city for the majority of the costs.

“In the budgeting, we assume that 85 percent of the hotels will be FEMA eligible, and that of those that are FEMA eligible, we will receive 75 percent reimbursement,” Joseph Sweiss from the Department of Emergency Management said in an emaillast week.

The city is poised to receive a massive increase in cash for homelessness services. Funds from the 2018 ballot measure Proposition C were freed up last month, releasing $492 million that was held in escrow. Going forward, approximately $340 million a year is expected to be collected through this tax. How that budget will be used will be determined by the Board of Supervisors, the mayor and an oversight committee. The Department of Homelessness and Supportive Housing, with a $364 million annual budget, is one of the largest city departments without a commission providing oversight.

“This once-in-a-generation investment in housing will be coupled with significant investments in diversion, prevention and some exits from homelessness which are medium-term and matched to each individual’s needs,” said Sweiss when asked how Prop. C funds will be used to assist individuals exiting hotel rooms. The mayor drafted a plan in July to provide more than 1,500 new units of permanent supportive housing over a two-year period, christening it the Homeless Recovery Plan.

While housing is being built or acquired, it remains to be seen where the current hotel residents will go in the coming months. As part of its call to shelter the unhoused indoors, the CDC said cities must “plan for how to connect clients to housing opportunities after they have completed their stay in these temporary sites.”