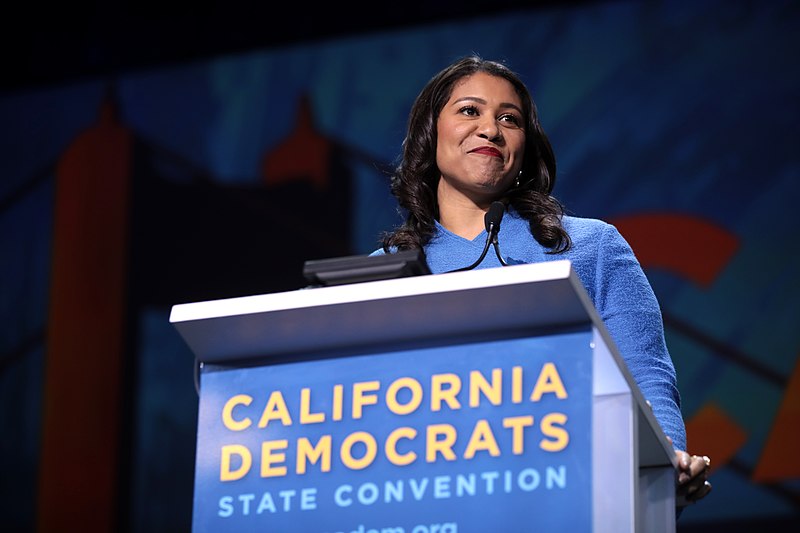 Lawyers and political rivals accused San Francisco Mayor London Breed of failing to rebuke a private company’s breakup of a homeless encampment early this month. Last year her city hosted the state Democratic Party convention at the Moscone Center. At the onset of the coronavirus pandemic, the facility became the site of a homeless shelter.

Mayor London Breed’s apparent toleration of an unsanctioned homeless encampment “sweep” by a corporate event company this month has led her critics to ask whether the policy of City Hall is to turn a blind eye to privatized harassment of people living on the streets.

The sweep, which occurred just past midnight on the morning of Sept. 10 outside the old Honda dealership on 12th Street, resulted in the disposal of eight people’s belongings. Peter Glikshtern, a partner in the event company, Non Plus Ultra, was captured on video coordinating the operation with a hired crew. Witnesses said they threw tents and bags containing human ashes, musical instruments, car repair parts and thousands of dollars in cash into the back of two trucks, which were later taken to the dump.

Neither the Department of Homelessness and Supportive Housing nor the mayor’s office clearly rebuked Non Plus Ultra’s actions. And they have not commented on evidence of inaction by police on the scene, also captured on video. The police department gave statements to the Public Press that contradict accounts made not just by witnesses and victims of the theft, but also by the instigator of the sweep himself.

Now, one supervisor is calling for an investigation. “There are rules on how these interactions between the city and people on the streets are supposed to occur,” said Supervisor Dean Preston. “To just have a private entity try to get around all that by seizing people’s stuff is highly problematic and definitely warrants an investigation. It sets a pretty dangerous precedent if the city is going to imply through inaction that it’s OK.”

Supervisor Matt Haney had previously called the police officers’ lack of intervention “shocking” and expressed concern about the potential for copycat sweeps. “The Department of Homelessness and the Mayor’s Office need to give some guidance on clarifying for people that they can’t do this,” he said.

On the night of the incident, the police were called three times. The officers at the scene took no visible steps to prevent the theft of the items, according to videos taken that night and interviews with two witnesses.

The department’s response to inquiries surrounding the incident has been inconsistent. Initially, Officer Robert Rueca issued this statement: “Officers responded to the unit block of 12th Street regarding a possible fight involving weapons. Officers arrived on scene and did not observe a fight nor did any person flag the officers down for any disturbance or other incident.”

“A police report was not made for this incident,” he added in a later email. “There was no party that spoke to the police who arrived on scene.”

However, witness Jeffrey McLemore said police interviewed Glikshtern after an altercation between the Non Plus Ultra partner and a camp resident that turned violent, an account Glikshtern confirmed.

“I had to lay on the ground and be searched, but the police never took me into custody,” Glikshtern told 48 Hills.

When the Public Press followed up with the police, they changed their account: “Officers arrived on scene and spoke with people at the scene, but no one at that time mentioned that they were a victim or that they witnessed anything.”

The police said that it was only the next day, when a victim of the sweep filed a police report over stolen items, that an official case was opened.

Law enforcement and city leaders are coordinating media statements regarding the incident. Both the police and the Department of Emergency Management — which responded with comments after the Public Press reached out to the Department of Homelessness and Supportive Housing — used the same language: “The leader of the clean-up did not prevent people from gathering their belongings.”

Unstated was whether it was in fact legal for the company to clear an occupied tent encampment, a responsibility that has always rested with city workers working in coordination with police, social service and public health agencies. Like her predecessor, Mayor Ed Lee, Breed has come under criticism by advocates for the homeless for initiating rounds of sweeps to break up encampments, with some tent residents claiming city staff seized their belongings without properly tagging them for retrieval. They have complained about missing medication, family heirlooms, electronics and cash, though officials have countered that they more often disposed of illegal drugs and stolen items.

No investigation from the city appears to have been launched into the Non Plus Ultra incident, and repeated requests for comment from the city attorney’s office have gone unanswered. Critics say that by failing to address officers’ inaction, the city is implying that it condones independent sweeps of encampments by individuals and businesses.

One witness disputes the assertion that Glikshtern did not prevent people from gathering their belongings. Jonathan Huerta described the cleaning crew as having “a whole bully effect.” He pointed to the fight between an encampment resident and Glikshtern as result of intimidation. Huerta said other residents seemed to fear violence if they attempted to reclaim their possessions.

Lawyers who have reviewed the case say there is ample evidence that the sweep was illegal.

“This is a case of clear and unmistakable criminal conduct by Non Plus Ultra and their representatives, which included the use of violence,” said lawyer John Hamasaki, who also serves on the city’s Police Commission. “The apparent disregard or endorsement by our city leaders is disturbing. When law enforcement is applied in a selective or discriminatory manner, it loses credibility and can become viewed as simply a tool for the wealthy to maintain dominance over the rest of us.”

Selective decisions by cops on how to enforce the law, Hamasaki said, could easily be challenged.

“What if it was a nice white lady in the Marina sitting outside with her blanket and belongings?” he asked. “If someone approached her and took her belongings, there would be an investigation. You can’t just view people differently based on their housing classification. You can’t commit crimes against people just because they’re homeless.”

Others questioned the lack of an investigation by the city. “When a crime is committed, there are different elements of that crime, and all have to be met,” said Tori Larson of the Lawyers’ Committee for Civil Rights, a public-interest nonprofit law group, which is investigating the incident.

“In this scenario, preventing people from gathering their belongings might be one element,” Larson said. “I don’t believe it is. But that wouldn’t cancel out the entire scope of the incident.”