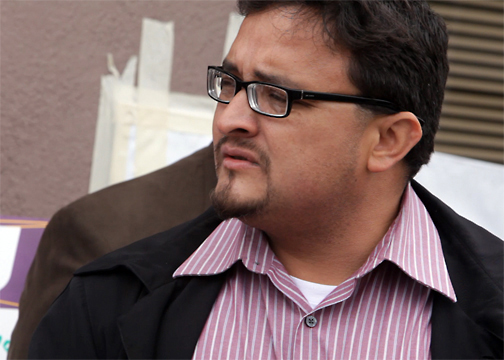 San Francisco is poised to overturn a policy, set by the mayor last year, that lets police turn over to immigration authorities minors who are suspected of felonies.

It started Monday at the Public Safety Committee of the San Francisco Board of Supervisors — not the first venue where most expect to hear impassioned personal speeches.

Supervisor David Campos, who entered the U.S. with his family from Guatemala at the age of 14 as an undocumented immigrant, opened the hearing on "Confidentiality of Juveniles’ Immigration Status." Turning his chair away from the committee, Campos addressed the gallery packed to overflowing largely with supporters.

"This is a civil rights issue," Campos said. "This is about giving children their opportunity to have their day in court."

Campos’ legislation would amend the San Francisco Administrative Code to allow city law enforcement officers and employees to report information about the immigration status of a juvenile to a state or federal agency only in the case of a felony conviction or a youth declared a ward of the court. The proposal passed the three-member committee and heads to a vote at the full board, where a veto-proof coalition of eight supervisors support it.

In July 2008, Mayor Gavin Newsom shifted enforcement of San Francisco’s City of Refuge Law, allowing the city to report minors to immigration authorities as soon as they are booked on felony charges, not waiting until a conviction.

Campos, who spoke no English when he entered the country as a teenager, invoked his own life as an example of the potential of the immigrant. Using courtroom skills honed as general counsel to the San Francisco Unified School District, Campos dramatized the city’s immigrant history during his passionate 15-minute address. The civil rights attorney said he was advocating "the notion that you are innocent until proven guilty."

Newsom contends that Campos’ ordinance is at odds with federal law, cannot be enforced, and is likely to be challenged in court, the San Francisco Chronicle reported Tuesday.

In his most direct reference to the mayor’s continuing opposition to the legislation, Campos acknowledged Newsom’s contention that the amendment could lead to legal challenges. But reminding his audience of his successful defense of the city’s right to provide public power against an attack on that right by PG&E, Campos assured the committee that the legislation he was proposing could be defended in court if necessary.

"The city attorney has approved this legislation to be legally tenable and defensible," Campos said.

He cited other instances when the city had failed to protect its immigrant population, notably its support for the federal Chinese Exclusion Act in the early 20th century.
"This time, let us be on the right side of history," Campos said.

Supervisors Carmen Chu and Sean Elsbernd have not expressed support for the policy change. Supervisor Michela Alioto-Pier was the only member of the Public Safety Committee to dissent during Monday’s hearing, saying, "I am afraid that a legal challenge could cause us to roll back — move backwards — and be worse off than we are now."

Campos lamented that it had taken more than a year to build his coalition of eight supervisors. The ordinance goes to a vote before the full board on Oct. 20.

Thirty-five community organizations and agencies, including the San Francisco Youth Commission, were represented at Monday’s hearing. Angela Chan, a staff attorney with the Asian Law Caucus, provided statistics for referrals of immigrant youth by San Francisco law enforcement and officials to U.S. Immigration and Customs Enforcement. Chan said that according to her records, from July 2008 to the present, 160 youths were referred to ICE, but 68 percent "did not result in a sustained petition," leading to further action by immigration authorities.

Diana Oliva, of the San Francisco Immigrant Rights Commission, said the city has an obligation to shelter the vulnerable. "It is really, really important to be able to protect children and not to break up families here in San Francisco," she said.

Newsom is still promising veto, despite the Board of Supervisors’ ability to override it, according to a report by Vic Lee at ABC7 News.