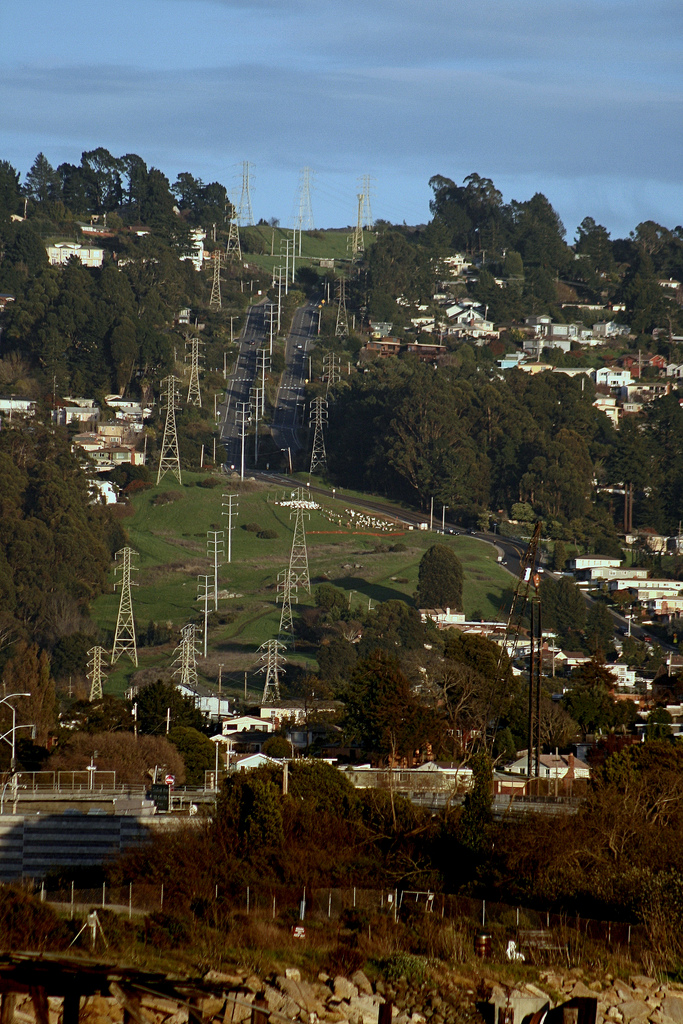 Importing electricity under cap-and-trade has its complications, as it is hard to distinguish the electrons delivered to California's grid system. Creative Commons photo by Flickr user

California’s effort to ensure that the state receives low carbon electricity could end up increasing greenhouse gas emissions elsewhere in the country, thanks to a practice known as contract reshuffling.

Under California’s cap-and-trade program, which established a carbon trading market last November, electric utilities, corporations, cities, universities and other entities need to lower their emissions or buy pollution “allowances” to account for their emissions.

Importing low-carbon electricity from out-of-state suppliers of renewable sources such as solar, wind, geothermal and hydropower is one way California’s electric utilities can decrease their carbon emissions.

But importing electricity under cap-and-trade presents complications, as it is difficult to distinguish the electrons delivered to California’s grid. While power plant owners here need to report emissions from the point of combustion, California lacks jurisdiction to impose that regulation beyond state boundaries.

These loopholes could lead to resource or contract reshuffling — in which suppliers aim to lower their carbon allowance costs by delivering lower carbon electricity to California, and sending higher emitting power to other states.

“It’s virtually impossible to prevent this contract reshuffling,” he said.

According to the California Energy Commission’s data from 2011, California imported 30 percent of its electricity from the Pacific Northwest and Southwest. The balance came from natural-gas fired plants, renewable resources and other sources based in the state.

The California Air Resources Board, the agency responsible for overseeing the cap-and-trade program, is still figuring out how to deal with this issue. The agency said it would place criminal sanctions on importers who practiced resource shuffling, but had to retreat after a commissioner with the Federal Energy Regulatory Commission warned that the disruption to California’s electricity market would have “major negative impacts on the economy of the West.”

The agency now allows out-of state electricity suppliers to sell both “specified” and “unspecified” power. Unspecified means power that is not traced to its source. Regulators essentially assign estimates of the carbon content of “unspecified” electricity coming to California’s grid.

Kevin Poloncarz, a California attorney who represents large out-of-state suppliers, said the Air Resources Board set the emissions benchmark or estimate too low for unspecified power. As a result it could lead to “phantom reductions” if suppliers label power as unspecified to minimize costs for carbon allowances, he said.

“Specifically, by failing to clearly define “resource shuffling” but nevertheless prohibiting it, and by requiring energy importers to affirm, under penalty of perjury, that they have not engaged in resource shuffling, the ARB is creating uncertainty and great concern among entities that sell into California,” he wrote.

Moeller said that if there is a very tight supply of electricity in California this summer, out-of-state suppliers might be less willing to sell electricity to the state because of resource reshuffling and other factors.

“You could have a real mess on your hands in California that spills over to the entire western market,” Moeller said.

In response to Moeller, the Air Resources Board suspended resource shuffling enforcement provisions until June 2014. The agency is evaluating the need for the provisions, agency spokesman Stanley Young said.

In an effort to clarify its definition of reshuffling activities, the agency identified 13 examples of transactions that do not constitute shuffling, and two that do. CARB said it will incorporate these revisions into regulation this year, then enforce the amended rule.

The list of transactions that do not constitute resource shuffling include electricity deliveries that are needed to replace power resources that are no longer available, replacing expired contracts and early termination of contracts.

The agency used broad language to identify resource shuffling activities. The transactions happen when out-of-state suppliers intentionally replace electricity generated at a high emission plant and sell it in-state to cut carbon allowance costs. Such transactions also occur when these suppliers sell power to another company who then sell a mix of power to California, regulators said.

James Bushnell, associate professor of economics at the University of California at Davis said that by clarifying its definitions of reshuffling — or at least defining actions that it would not consider to be reshuffling — the agency has cleared up uncertainty about potential penalties suppliers could face.

“In that sense the recent developments will technically reduce reshuffling, but more by calling it something else than by eliminating the behavior,” Bushnell said.

Attorney Poloncarz said out-of-state electricity suppliers are concerned that the Air Resources Board may cause confusion in the market by changing shuffling rules yet again before adopting and enforcing them.

If suppliers are worried that the power contracts they sign may be prohibited later under cap-and-trade, they could decide not to take the risk of selling to California in spite of any premium they could get from selling clean power to the state, he said.

While resource shuffling could reduce the overall effectiveness of cap-and-trade, it “doesn’t rise to the level of underlying the basics of the program,” said Tim O’Connor, director of California Climate and Energy Initiative at the Environmental Defense Fund, an environmental organization.

The nascent market also sets the stage for a much larger cap-and-trade program, when other states follow California’s lead, O’Connor said.