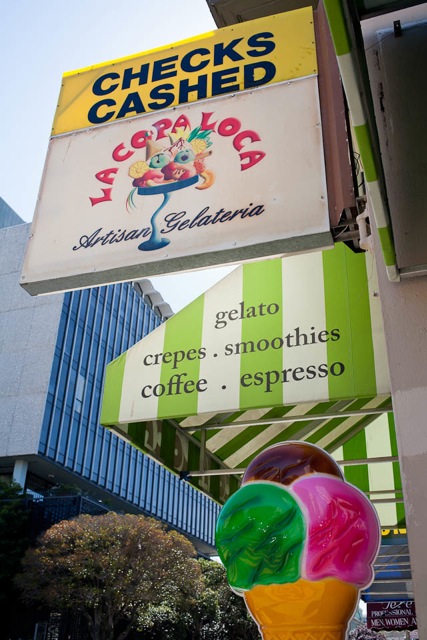 The Mission District is a locus of payday lending. Photo by Jason Winshell/Public Press

“Fast Easy Cash when you want it!” That’s the promise on the cover of an application for a “cash ’til payday” loan from DFC Global Corp.

The company operates eight Money Mart stores in San Francisco, more than any other payday lender. Anyone at least 18 years old with a bank account, phone number, photo ID, and job or “steady source of income” (and not in bankruptcy or behind on another repayment) can get a loan.

But fast money comes at a high price. The $300 shrinks before the borrower walks out the door. The lender normally withholds a $45 fee.

While that might not seem like an exorbitant price for the service, it comes at a shockingly high annualized interest rate that results from the loan’s high fee, small amount and short duration. For the $255 the borrower actually gets, with a two-week repayment deadline, the annual percentage rate is a cool 459 percent.

Greg Larsen, a spokesman for the California Financial Service Providers Association, a trade group of check-cashers and payday lenders, said that using an APR was an “apples to oranges” measure of the cost of a payday loan. “People don’t use the product for 52 consecutive weeks,” he said.

Currently, California has a $300 limit on each payday loan. But legislation pending in Sacramento would raise the maximum amount to $500. While supporters of the bill say the loans benefit working people, consumer advocates worry that borrowing at high interest rates can sink poor people further into debt. That was the concern of the San Francisco city attorney’s office, which this fall settled a suit with a payday lender accused of exceeding the legal limit.

So why borrow money at check cashing and payday loan stores? Alberto Garcia, a restaurant worker from Hayward, said he had never taken out a payday loan but would “if I needed the money.” Garcia was interviewed after leaving a California Check Cashing store on the corner of Kearny and Geary streets. He said he had just purchased a money order and could imagine using a payday loan to get needed cash: “I would consider the bank, but it would be much easier to go here.”

Others may see no place else to turn. Robert Mitchell, who had just completed a Western Union transaction in a Money Mart store on Market Street, said he might take out a payday loan if he faced a deadline to pay rent or a car note, or needed money for a special occasion: “I’m willing to bite the bullet if I have to and pay a little something for that.”

Industry spokesman Larsen said consumers, when allowed a choice among a range of financial options, “will always find the credit that is the most cost effective.”

But industry documents acknowledge that price may be secondary to the immediate need for money. DFC’s annual report, in the dry language of Wall Street, says that for its customers, “the pricing of products and services is a secondary consideration.”

Payday lending began in the mid-1990s, fueled by promises of fast and easy money. “Ultimately, convenience, hours of operations, accessibility and other aspects of customer service are the principal factors influencing customers’ selection of a financial services company in our industry,” DFC’s most recent annual report says.

Consumer advocates say payday loans are dangerous financial products that can easily trap borrowers in a debt spiral, forcing them to take out round after round of high-interest loans to repay earlier ones.

“Payday loans are very expensive, and they are targeted at people who can least afford to pay them back,” said Liana Molina, the payday campaign organizer for the California Reinvestment Coalition, which advocates for the right to equal access to banking and other financial services for low-income people and minority communities. “If someone is treading financial water, a payday loan is an anchor that’s going to sink them.”

But industry supporters say that payday loans provide a vital source of cash to strapped borrowers, and that costs are justified by the risks lenders take on by making the unsecured loans. A payday loan is a “convenient, short-term financial option” that provides “a fix for families faced with the prospect of bouncing checks, shutting off utilities or worse, skimping on basic needs such as medical emergencies,” according to written comments submitted by the California Hispanic Chambers of Commerce to the state Senate’s Judiciary Committee.

Payday lending is also big business. In 2010, about 1.6 million Californians borrowed $3.12 billion from the state’s more than 2,100 payday loan outlets, according to a report compiled from the industry’s unaudited disclosures to regulators. Each borrower took out an average of 7.5 loans, for an average period of 17 days. The average loan carried an APR of 414 percent.

Larsen noted that the number of payday loan stores in California had declined by 400 or 500 in recent years. The industry, he said, has reached a “maturity level, has stabilized, and now is contracting to some degree.”

Although the state does not require payday lenders to publicly disclose their revenue, the industry data translate to statewide annual fee revenue of about $600 million for the industry. And while the default rate is high — $71 million last year in California — the business is still lucrative. Larsen declined to comment on those figures.

DFC, which operates Money Mart stores, said its customer base comprises mostly “service sector and self-employed individuals” looking for “cash necessary for living and other episodic expenses.” DFC’s 1,269 retail stores originated payday loans with a face value of $2.2 billion in the last fiscal year. DFC’s 312 stores in the United States, including 99 in California, originated loans with a face value of $481 million, and pocketed $61.6 million in revenue.

In October, DFC agreed to settle a lawsuit that alleged it had violated California law by making payday loans over the $300 limit. Without admitting it violated the law, DFC agreed to pay $7.5 million in restitution to consumers, forgive up to $8 million in unpaid balances on other outstanding loans and pay San Francisco’s city attorney $875,000 to cover investigation and litigation costs. California customers of Money Mart who took out payday loans between January and July 2005 or installment loans between July 2005 and March 2007 may be eligible for restitution. More information about the settlement is available on the city attorney’s website, www.sfcityattorney.org.

DFC spokeswoman Julie Prozeller declined to comment on the lawsuit and settlement.

The District of Columbia and 12 states ban payday loans, according to a tally in February by the National Conference of State Legislatures. Laws or court rulings in five other states effectively prevent payday lending, according to the Consumer Federation of America. California’s payday lending limit is lower than that of all but one of the states that allow such lending. Montana also limits each loan to $300.

Some legislators want to raise the limit. Assembly Bill 1158, sponsored by Majority Leader Charles Calderon, D-Montebello, would allow payday loans of up to $500. The existing ceiling has remained unchanged since passage of a 1996 law, also sponsored by Calderon, which legalized payday loans in the state.

The bill passed the state Assembly 49 to 16 in June. In the Senate, the bill was passed by the Banking and Financial Institutions Committee on June 30 and sent to the Judiciary Committee, which has not yet acted on the legislation.

Liana Molina of the California Reinvestment Coalition, which opposes the bill, said there is still a chance it may emerge from the Judiciary Committee. Opponents have proposed amending the bill to require that payday loans not be due for repayment in less than 30 days, limit borrowers to no more than six loans annually and make lenders responsible for underwriting each loan by assessing a borrower’s ability to repay it.

But even with those amendments, consumer advocates still would not line up behind AB1158 and its increase in the payday loan limit, Molina said.

Larsen, the spokesman for the payday lenders, declined to comment on the amendments proposed by the bill’s opponents, but said that the bill is receiving careful consideration.
in the Legislature and that backers would “work through that process.”

Rick has been a full-time reporter for 17 years and currently freelances for various publications. From 2000 to 2007, he was a staff writer at the Contra Costa Times, where he covered the California energy crisis, the housing bubble, Chevron and PG&E, and investigated abusive trust mills and mortgage brokers. He has also worked for Dow Jones News Service and the Valley News in Lebanon, N.H. From 2007 to 2010, he worked as an investigative reporter and advocate for the National Consumer Law Center in Boston. He graduated from Mills High School in Millbrae and attended college back east.