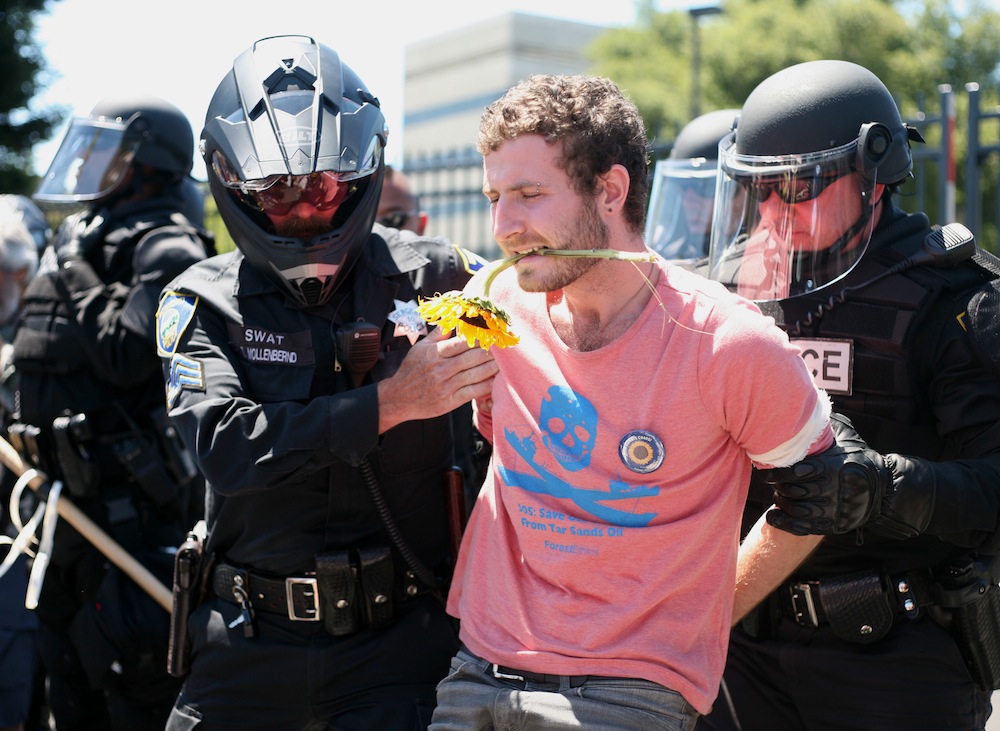 More than 1,000 protesters marched through Richmond to the gates of the Chevron refinery on Saturday. Richmond police arrested 209 protesters who engaged in acts of civil disobedience by crossing the refinery property line and refusing to leave. Speakers included Richmond Mayor Gayle McLaughlin and national climate organizer Bill McKibben, who spoke about the danger of refining dirty crude oil. Photo by Anna Vignet / San Francisco Public Press

The hundreds of activists on hand Saturday at Chevron’s Richmond refinery to protest its contribution to global warming might be surprised to learn that California says it has found a way to control the company’s carbon footprint within the state, despite its plans to expand.

The refinery, occupying a large swath of San Francisco Bay west of the Carquinez Strait, has received permits to build out extra capacity to refine low-grade crude oil. Yet the expansion would not contribute to global warming, state regulators said, because a new statewide cap on total industrial emissions of carbon dioxide and other greenhouse gases requires the company to neutralize any increases by buying pollution rights from other companies planning to cut their own emissions.

Chevron acknowledged in a permit application to state regulators that new equipment at its sprawling Richmond facility, if run at full capacity, would increase its greenhouse gas emissions, though it did not provide any numbers in the application. The new plant can process higher-sulfur crude oil, a particularly energy-intensive activity.

Environmental activists with 350 Bay Area, and other groups demonstrated against Chevron in reaction to the expansion, to mark the one-year anniversary of a major industrial accident in which an explosion and fire led to the release of an enormous plume of toxic fumes that frightened thousands and sent residents to area hospitals complaining of breathing problems.

The “peaceful civil disobedience” at the facility’s main gate led to more than 200 arrests. Activists said the government should do more to limit the expansion of refinery capacity and instead encourage the adoption of cleaner and renewable fuels.

The “350” movement gets its name from climate scientists’ warning that atmospheric carbon dioxide concentrations beyond 350 parts per million will cause widespread environmental damage. This year the level surpassed 400 parts per million for the first time in recorded history.

The organizers also used the protest to highlight an imminent decision by the Obama administration on the fate of the Keystone XL pipeline, which would carry dirty tar sands oil from Canada to the Gulf Coast.

Beyond the climate effects, said lead organizer Bill McKibben, Chevron should reduce its reliance on the dirtiest fuel stocks at its Richmond facility, which lead to local air pollutants such as soot, and could increase the chances of industrial accidents.

But regulators at the California Air Resources Board say the state’s greenhouse gas cap-and-trade program, which started last fall, will use market forces to reduce carbon emissions. Any company wishing to pollute more than its share must buy credits on a new cap-and-trade marketplace launched in November.

David Clegern, a spokesman for the California Air Resources Board, said that if emissions from refining dirtier crude oil at the Richmond Chevron facility were to rise, the change would need to be reported only after construction was complete.

(The Public Press previously reported about top-polluting industries lobbying the California Air Resources Board for exemptions from cap-and-trade.)

While Chevron conceded that its ability to emit more greenhouse gases would increase with the expanded facility, it stressed that the new equipment would be more efficient, reducing emissions “per unit volume” of production.

The facility will have the ability to process crude oil with a sulfur content of up to 3 percent. That is nearly double the 1.7 percent average sulfur content of the oil currently processed in Richmond, and that is already a high percentage by industry standards.

Cleaning that oil is an emissions-intensive process in which the oil coming into the factory must be heated and pumped through a hydrogen plant to break it down into its chemical components and remove contaminants such as sulfur. The company says it is seeking to broaden its capabilities to stay competitive.

This is Chevron’s second attempt at pushing through construction of the new equipment. A Contra Costa County superior court found in 2009 that the refinery’s 2005 permit application was riddled with inconsistencies in its description of what kind of oil the new equipment would be able to refine. The judge also rejected the refinery’s proposal to wait a year after completion to measure emissions and then plan how to reduce them.

In June, Chevron touted its community commitment by announcing that it would use local labor, hiring 1,000 workers to construct the new plant. With the equipment upgrade already 50 percent complete at the time of the court decision, Chevron filed a more complete permit application in 2011.

In it, the company said the new plant would be approximately 15 percent more energy efficient than the existing one “on an emission basis per unit volume of hydrogen product.” But the permit application also explains that it will have additional capacity, which at maximum production will generate “more Greenhouse Gas (GHG) emissions than the existing Hydrogen Plant.”

But if public statements are any indication, the company must also be betting on cap-and-trade providing a way to make its effect on climate change balance out. Melissa Ritchie, a spokeswoman for the Richmond Chevron refinery, told the East Bay Express that the equipment upgrade would have zero net greenhouse gas emissions.

Calls to the company by the Public Press were not returned.

Chevron must comply with California’s cap-and-trade legislation, which forces facilities to account for their pollution either by buying allowances to pollute or buying “offsets” offered by other companies on a registry of environmental projects, which could be in other states or countries. Those projects must document a net greenhouse gas reduction, though they do nothing to protect residents of California communities near pollution sites from toxic local toxic effects.

(Read a story from the Public Press explaining how the carbon offset market will work.)

Because 90 percent of a petroleum refinery’s allocations are given for free, the refinery must account for just 10 percent of its greenhouse gas emissions through the extra expenditures. But the formula for how many metric tons of carbon dioxide a facility gets credit for involves some complex calculations that try to estimate not only the actual output but also a baseline for efficient operation for each industry.

Andres Soto, a community organizer for the group, has spent his whole life in Richmond, and has seen many neighbors suffer from respiratory problems. He said the health and safety of residents and workers will be even more at risk of accidents if the construction project resumes.

“There is a long history of abnormally high rates of cancers as well as asthma and other autoimmune diseases along the refinery corridor,” Soto said. “Dirtier crude is also more corrosive in piping systems and has more polluting byproducts.”

Greg Karras, a senior scientist for Communities for a Better Environment, studies the emissions effect of processing dirtier crude. His research found that the type of oil a refinery processes is the main factor in facilities’ emissions.

Karras wrote in an email that “switching to fundamentally different, lower quality oil is the worst thing a refinery like Chevron’s in Richmond could do for our environmental health and safety.” He mentioned two damaging effects that could result from heavier crude: more heavily toxic emissions that wouldn’t be mitigated locally and the increased risk of explosions from corrosive pipes.

Miya Yoshitani, associate director of the Oakland-based Asian Pacific Environmental Network, said her group wanted Chevron to fix corrosion problems in the entire refinery, not just the unit that sent thousands to the hospital. But the materials Chevron used did not meet the highest standards, going against recommendations of the Chemical Safety Board, Yoshitani said.

With corrosion in the pipes, there is particulate matter and the potential for toxic releases from the refinery, she said. “Our concern is about the safety of the community and the contribution of greenhouse gas emissions that will affect us all,” Yoshitani said.

In addition to creating more emissions from a more intensive fuel cleaning process, sulfur is highly corrosive. If not rigorously checked, pipes could spring a leak and cause an explosion or fire.

That is a big concern for the community and for state safety inspectors. Last August, a corroded pipe at the Chevron refinery caused a fire that injured six workers. The black plume of smoke frightened residents for miles around, and sent more than 15,000 residents to the hospital complaining of breathing problems.

According to the Associated Press, Chevron agreed on Monday to pay $2 million in fines and restitution and pleaded guilty to six charges related to last year’s fire. The charges had been filed by the California Attorney General’s Office and the Contra Costa County District Attorney’s office.

Last week the city of Richmond hired a law firm to file suit against Chevron for damage that resulted from the accident.

Anna Vignet is an illustrator and reporter for the San Francisco Public Press.