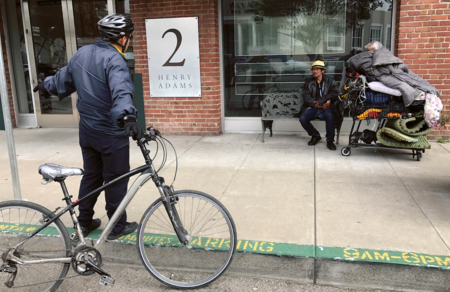 Nearly 200 California cities allow private organizations to manage key aspects of their downtown and commercial districts and to implement policies that restrict the rights of homeless people, according to a new report from the Policy Advocacy Clinic at UC Berkeley School of Law. Many of the groups use assessments levied on business and property owners — and collected by local tax authorities — to hire security patrols that work to keep homeless people moving and limit their presence on public streets.

The groups, known as business improvement districts, or BIDs, lobby city councils, the state Legislature and other government bodies for policies that limit the rights of the homeless, the report said. BIDs also fund business promotions, street cleanings and events.

The lobbying efforts engaged in by BIDs are of questionable legality, the clinic contends, because assessment revenues are being used to push for policies that affect large areas or numbers of people, not just to provide specific benefits to property owners. In 2013, a Los Angeles Superior Court judge dissolved the Arts District BID, ruling that its “economic development services” like distributing marketing materials and organizing real estate tours provided no special benefits, according to the law clinic report.

The report, which was commissioned by the Western Regional Advocacy Project, a network of homeless rights groups that includes the Coalition on Homelessness San Francisco, cites numerous examples of this type of policy advocacy. San Francisco’s largest such group, the Union Square Business Improvement District, was a key backer of a 2010 measure approved by San Francisco voters, Proposition L, that barred people from sitting or lying on public sidewalks during the day.

In 2015 and 2016, the California Downtown Association, aan alliance of improvement districts, mobilized members to oppose a “Right to Rest Act” and other bills in the Legislature that would have protected the rights of homeless people to freely use public space. The Downtown Sacramento Partnership, a 66-block BID in the center of the state capital, employed a lobbyist to defeat the measures.

“This is a great example of the potential influence CDA has under the dome” of the Capitol, Emilie Cameron, the partnership’s director of policy and communications, told members of the California Downtown Association in an email obtained by the clinic and reprinted in the report. “We have a unique constituency and potentially a very strong voice that can sway legislators on critical issues.”

Emails sent to the Union Square district and the California Downtown Association requesting comment were not immediately answered.

The creation of business improvement districts is enabled by a series of state laws. According to the Berkeley report, most California BIDs were set up after a 1994 law that allowed a majority of property and business owners in a defined area to petition their local government to establish an improvement district. The law authorized county tax authorities to include the assessments that fund the districts on property tax bills paid by business and property owners.

The law school report estimated that together, California districts bring in “hundreds of millions of dollars” in assessments but did not offer a precise figure. In the 2016-2017 fiscal year, the Union Square BID had assessment revenue of $3.4 million and a total budget of $3.8 million.

The report ties the proliferation of business improvement districts to the increasing number of local ordinances controlling or limiting the activities of homeless people. From 1995 to 2014, the report found, 60 BIDs were established in cities across the state and 193 local measures regulating the homeless were enacted.

Many improvement districts hire their own unarmed security forces that typically patrol the district by foot or bicycle and are often referred to as “ambassadors.” While these security operatives do not have any police power to make arrests, the report cites examples of BID-employed security personnel confiscating the property of homeless people and coordinating closely with police departments to identify “hot spots” and get police to enforce anti-loitering laws.

To Paul Boden, a longtime advocate for homeless people and director of the Western Regional Advocacy Project, the BIDs essentially privatize public space and criminalize poverty and homelessness. The improvement districts want to make sure “that every sidewalk, street and park serve to benefit the businesses,” Boden said. “Public space has become nothing more than the hallways of a shopping mall.”

The report was compiled over two years by law students working with the school’s Policy Advocacy Clinic. As part of their research, the students identified 189 improvement districts in the 69 largest cities of California and surveyed them about their activities and budgets. They also used public information requests to gather email records, minutes from meetings and other documents.

This article was supported in part by a grant from the Fund for Investigative Journalism.