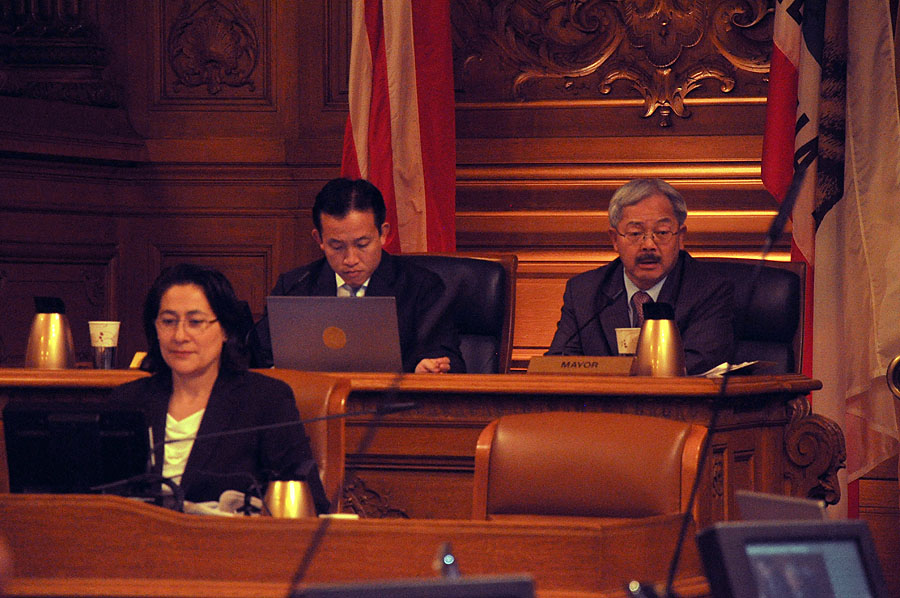 Josh Wolf, Reporter |
LikeTweet EmailPrint More
Drivers will soon be able to use their credit cards to pay for parking at all 25,000 meters throughout the San Francisco, but efforts to greatly expand metered parking are on hold.

The Board of Supervisors Tuesday approved a $51.2 million contract to replace the city’s aging coin-operated meters with machines that accept credit cards. But the supervisors rejected the request by the San Francisco Metropolitan Transportation Agency for 10,000 new meters that it could install wherever it chose.

Instead, the board approved a contract permitting an additional 5,000 additional meters over the life of the five-year contract. Those would be used to replace broken meters, swap out units being repaired and replace the meters at the Port of San Francisco, which is not included in the 25,000 figure, said Supervisor John Avalos, who proposed the revised contract.

“I’ve always said I think replacing the old meters with the new ones is a great thing,” Supervisor Mark Farrell.“If I have to, I’d rather pay with a credit card than through the old meters. So I think it’s a step in the right direction. If we do encounter a time where we talk about expanding parking meters that will be a separate topic for conversation.”

But while quizzing Ed Reiskin, the city’s transportation director, Supervisor Malia Cohen discovered that the agency would still be able to expand the number of parking meters.

“If we were to get, as we sometimes do, very small-scale requests for a couple meters for a commercial establishment, I think we would have room within that 5,000,” Reiskin said. “But we certainly wouldn’t be able to do anything of the scale that we originally proposed.”

The exact number of new meters possible under the contract will depend on how many break down and need to be replaced, Reiskin said. During the beginning period of the contract, the department would need to be judicious about adding meters, though that could change toward the end of the contract.

“This resolution goes as far as we can go,” Supervisor David Campos said. “We need to figure out more transparency and more community involvement.”

But these changes still did not satisfy Supervisor Jane Kim, who said residents in her district were unfairly affected by parking meters, and that the transit agency had been unresponsive to her requests for relief. The other 10 supervisors voted to approve the modified contract.

Mayor Responds to Questions About Affordable Housing and Evictions

Mayor Ed Lee called on the state government to modify the Ellis Act during Tuesday’s scheduled question time with the supervisors.

San Francisco has seen a sharp increase in Ellis Act evictions following the economic recovery, and the Board of Supervisors has been exploring ways to stop them while creating more affordable housing opportunities.

Supervisor Eric Mar spoke of the high rate of evictions in his district, and asked Lee to help establish a multi-service center focused on tenant services.

“As you know, I started my career as an affordable-housing advocate and tenants-rights lawyer,” Lee said, “and used to pride myself on my ability to extend the process of an Ellis Act eviction and, in turn, help tenants remain in there homes for as long as we could. I’m committed to exploring the best way to reach residents of the Richmond District with you, supervisor.

“The heart of the matter lies with state law itself,” Lee added. “The Ellis Act is being abused by real estate speculators, so we need to go to the state and change the law. We need to end the real estate speculation that is destabilizing our neighborhoods. And while we’re fighting this battle we must also stay focused on growing our own city back here at home.

“Every rental or ownership unit that comes online is one little bit of pressure released from the market. The more we build, the more affordable San Francisco can remain, even if it’s just incrementally.”

Board President David Chiu asked Lee what the city could do to encourage developers to build more affordable housing.

“Currently 20 percent of what is being built in the city is permanently affordable housing for our low-income households and working-class families,” Lee said. “If we had not responded to the loss of the Redevelopment Agency swiftly with a 30-year source of affordable housing funding, our housing climate would be much worse than it is today. This is the first year of the 30-year $1.3 billion dollar housing trust fund.”

The city has an estimated 30,000 to 40,000 small in-law apartments that are illegal because they were constructed without the proper permits, Chiu said. He added that 40 percent of tenants in these units lack written leases with their landlords, limiting their rights as tenants.

For the past month, many financially struggling condo owners have appeared in front of the Board of Supervisors to appeal condo conversion fees, which the supervisors established to generate additional money for affordable housing.

The $20,000-per-unit fee is required for people who share mortgages through “tenancies in common” and would like to create sepaprate mortgages for each unit. In some cases fees are reduced based on the amount of time the property owners had waited in the lottery system that the city has since discontinued.

Although homeowners are allowed to request an extension based on their economic needs, it only extends the final due date of the money by a few months. They are also allowed to appeal the fee altogether through a hearing at the Board of Supervisors, but the board is prohibited from granting these appeals simply because the owner cannot afford to pay. The supervisors are allowed to approve an appeal only if the owner is able to prove that there is no direct economic impact to the city’s affordable-housing stock as a result of converting the property into a single-family residence (a move that would remove it from rent-control protections).

That bar is extraordinarily high, said Supervisor London Breed, and almost all appeals have been based solely on economic hardship claims. Breed’s new legislation would allow the City Attorney’s Office to deny appeals that are not legally viable, unless a supervisor requests the appeal be heard by the full board.

Breed said she was exploring ways to help people who could not afford the fee, but that this stopgap measure would avoid wasting people’s time fighting appeals that would not succeed.

Supervisors Mark Farrell and Scott Wiener were the only ones to vote to approve the appeals.