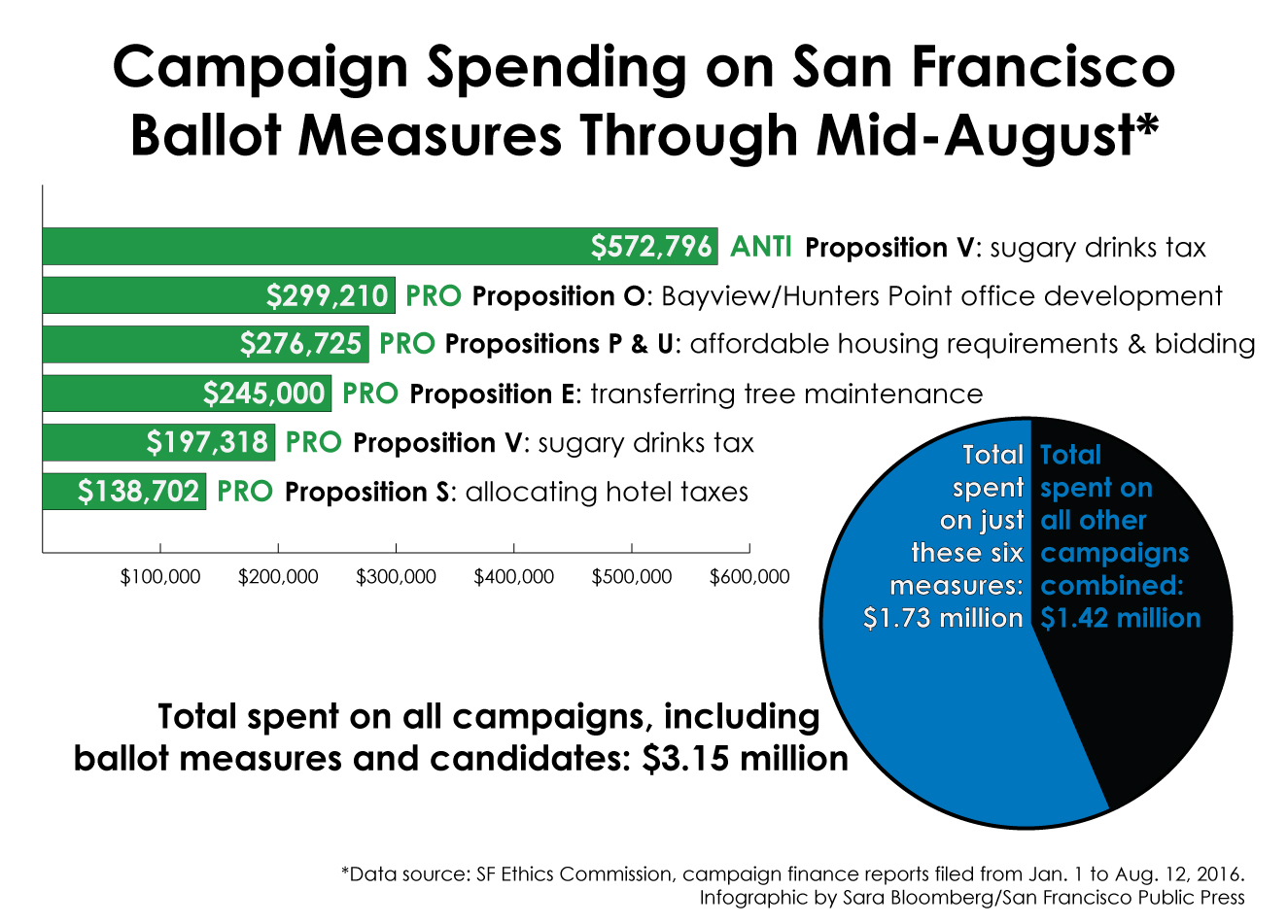 Though San Franciscans will not vote for nearly three months, big money is already flowing into the fall campaign, like Karl the Fog swarming over Twin Peaks on a chilly summer day.

Since January, local ballot measure and candidate campaigns have spent $3.15 million on the November election, according to San Francisco Ethics Commission records. More than half of that — 55 percent — has been spent on just six ballot measures, to the tune of $1.73 million. Campaigns can be expected to ramp up spending in September and October.

While it is impossible to predict exactly how much will be spent on this election, an analysis of campaign finance records by the San Francisco Public Press shows that more money is flowing into the local elections since at least 1998, when the Ethics Commission started collecting filings online. This holds even when adjusting for inflation. Leading the pack is Big Beverage opposition to Proposition V, a proposed tax on sugary drinks. A similar measure aimed at curbing diabetes and obesity failed in 2014.

The single largest contributor to any race so far is the American Beverage Association, which has already donated $545,000 to the anti-sugary drink tax committee, which it has named — misleadingly — “No SF Grocery Tax.” The committee spent $572,796 as of mid-August, according to the most recent records.

A committee supporting the tax has spent just under $200,000, and so far has been primarily bankrolled by former New York City Mayor Michael Bloomberg (no relation to this reporter). In 2012, he banned the sale of sodas larger than 16 ounces in his city, only to have the regulation struck down by the state’s highest court.

Oakland will also vote on a sugary-drink tax this fall.

In 2014, Berkeley became the first city in the nation to pass such a tax, followed by Philadelphia. Bloomberg was the biggest backer of the Berkeley measure, contributing $657,000 to the “yes” campaign. He did not contribute that year to San Francisco’s two-cents-per-ounce proposition, which failed because it did not meet the two-thirds vote requirement; Berkeley’s needed only a simple majority.

The beverage association, which works on behalf of such beverage behemoths as Dr Pepper Snapple, Pepsi-Cola and Coca-Cola, contributed the lion’s share of the $2.4 million that was spent in 2014 to try to defeat the Berkeley tax.

Here are five more ballot measure campaigns that emerged as top spenders this month. Letters were assigned Monday to the 25 local propositions that have qualified for the ballot, along with an economic analysis of each by the Controller’s office.

Who supports it: FivePoint Holdings, an arm of Lennar Corp., developer of the massive Hunters Point Shipyard residential/commercial/office/retail/recreation project. It has contributed $350,000, and its committee — “Jobs, Housing and Parks Now for Candlestick Point and Hunters Point” — has spent over $299,000.

Opposed: Two committees have filed paperwork with the Ethics Commission: “Housing Forward SF” and “Stop the Developer Giveaway.” So far, neither has raised or spent any money, according to the most recent records.

Who supports it: Friends of the Urban Forest has contributed and spent $245,000 on this campaign.

Who supports it: A coalition primarily of local arts non-profits is spearheading this campaign.  The committee — “San Franciscans for the Arts & Ending Family Homelessness” — spent $138,703.