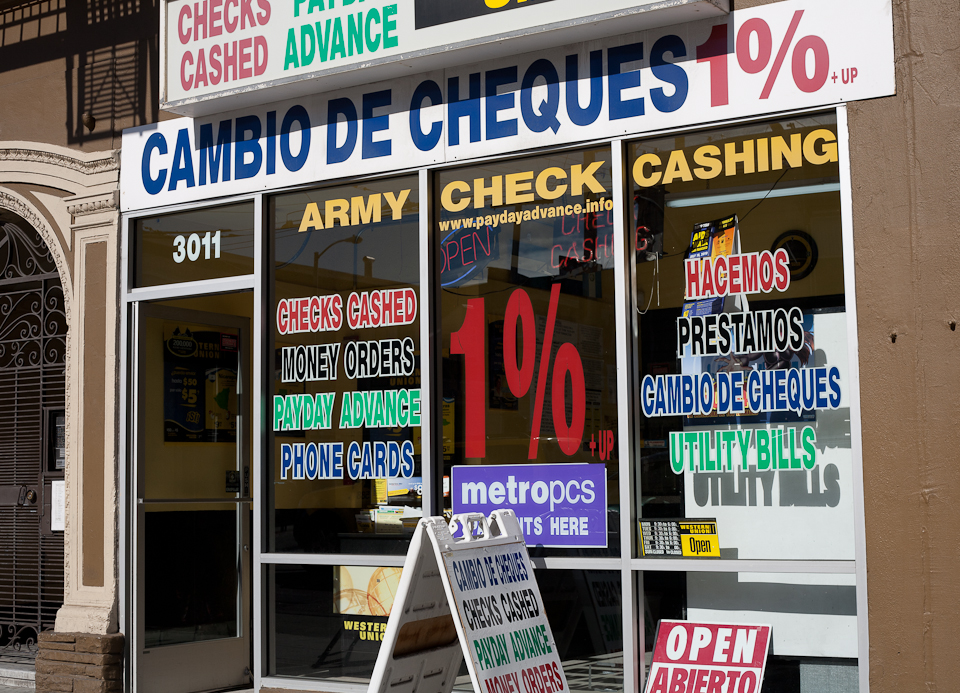 Even as the Occupy San Francisco encampment at the base of Market Street expressed outrage at big banks and high finance, it remained business as usual at some of the city’s less glamorous financial establishments.

High-interest, unsecured “payday” loans are readily available at 32 establishments along Market Street and in low-income communities around the city. Most people with bank accounts qualify.

These stark storefronts — where hard-pressed consumers line up to speak with clerks behind Plexiglas windows and apply for high-cost payday loans — may seem unconnected to Wall Street.

But while their names and brands are nowhere to be seen, banks and rich investors based here or in distant financial enclaves like Manhattan or Zurich provide funds to or own stakes in some of San Francisco’s largest payday lenders. These include Money Mart, with eight stores, and California Check Cashing Co., with five.

In March, Wells Fargo & Co., the largest bank based in San Francisco, acted as the administrative agent of a bank syndicate that provided DFC Global Corp., the owner of Money Mart, with a $200 million revolving credit, according to SEC filings. Essentially a giant credit card with a March 2015 expiration date, this deal provided DFC with money to lend and pay expenses, and a war chest to fund possible acquisitions of other companies.

Gabriel Boehmer, a Wells Fargo spokesman, said the bank would not share details about the loan. “Because of the customer relationship with Money Mart, I can’t comment on that at all,” he said.

Boehmer said Wells Fargo does “provide credit to a variety of responsible financial services industry companies,” including some payday lenders.

The bank is “really selective” in such lending, and its “total commitments to these customers represent a small percentage of Wells Fargo’s commercial lending portfolio,” Boehmer said. “Our philosophy is that every responsible business that complies with the law has equal access to consideration for credit at Wells Fargo.”

Boehmer stressed that payday lenders and check cashers that seek loans from Wells Fargo receive “an additional level of scrutiny,” including on-site visits to review their compliance with laws and regulations and their credit health. The due diligence occurs, he said, “because these companies are so highly regulated.”

A look at the terms of the revolving credit Wells Fargo provides to DFC, a Berwyn, Pennsylvania-based company that investors recently valued at about $850 million, shows why the payday lending business can be so profitable. DFC’s credit line, which can be raised to $250 million, carries an adjustable interest rate set 4 percent above the London Interbank Offered Rate. In the current market, that means DFC pays about 5 percent interest to borrow some of the money it then lends to customers at nearly 400 percent.

Wells Fargo, in addition to being a lender, has at least a small stake in DFC’s high-margin lending operation. A proxy statement filed by DFC before its 2010 shareholder meeting disclosed that Wells Fargo and its affiliates held 2.7 million (about 11 percent) of the shares outstanding. A filing in August by Wells Fargo showed it had cut its ownership stake in DFC to 1.1 million shares. While that stake was recently worth about $21 million, it constitutes only a tiny sliver of the $147 billion portfolio controlled by the bank and its affiliates. Wells Fargo was not represented on DFC’s board and was no longer one of its largest shareholders, according to DFC’s 2011 proxy statement.

Boehmer said he had no comment on Wells Fargo’s ownership interest in DFC.

Another large bank has provided key financial backing to San Francisco’s largest payday lender. Credit Suisse, an investment bank based in Zurich, acted as the lead underwriter for a public offering of shares in DFC. The payday lender raised $117.7 million in that transaction, according to securities filings. Credit Suisse pocketed $6.8 million.

Credit Suisse is also the lead underwriter of a pending initial public offering of shares in Community Choice Financial Inc. The company was created in April, when Ohio payday lender CheckSmart merged with California Check Cashing Stores, which has five storefronts in San Francisco and 141 statewide.

Credit Suisse also led a group of banks that provided a $40 million line of credit to Community Choice, which will operate a chain of 433 payday loan stores that collectively posted revenue of $310 million in 2010. Community Choice hopes to raise $230 million from its initial public offering, Dow Jones Newswires reported in August.

Golden Gate Capital, a San Francisco investment management company with an office on the 39th floor of the Embarcadero Center, received a $16.7 million dividend from the April merger and will remain a major shareholder in Community Choice, according to a preliminary prospectus filed with securities regulators.Representatives of Community Choice, Credit Suisse and Golden Gate Capital did not respond to requests for comments.

Rick has been a full-time reporter for 17 years and currently freelances for various publications. From 2000 to 2007, he was a staff writer at the Contra Costa Times, where he covered the California energy crisis, the housing bubble, Chevron and PG&E, and investigated abusive trust mills and mortgage brokers. He has also worked for Dow Jones News Service and the Valley News in Lebanon, N.H. From 2007 to 2010, he worked as an investigative reporter and advocate for the National Consumer Law Center in Boston. He graduated from Mills High School in Millbrae and attended college back east.