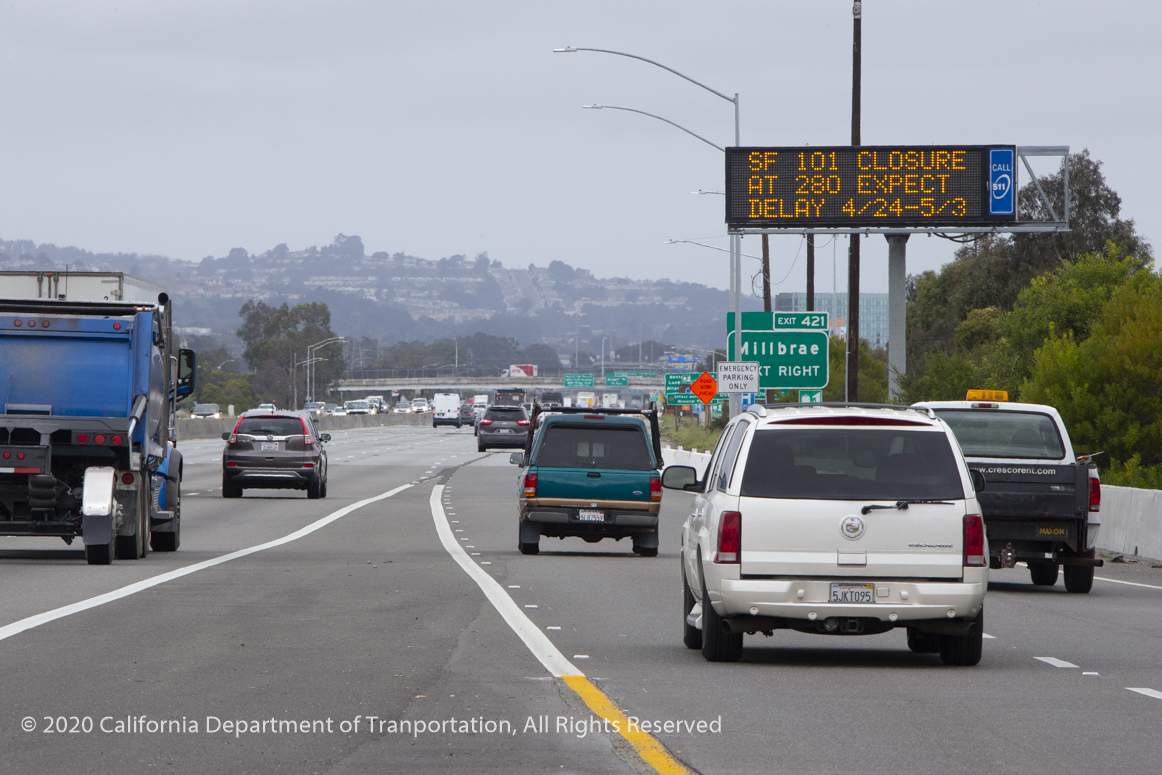 During the coronavirus pandemic, CalTrans was able to take advantage of the lull in traffic to completely close part of Interstate 101 in San Francisco in April 2020 to complete work on the Alemany circle in just nine days instead of the original 18 days scheduled for the project.

The morning and evening commute nearly disappeared in March 2020 as the Bay Area went into pandemic lockdown, and while travel on public transit continues to lag this summer, many people are getting behind the wheel to get to and from their jobs.

Sean Nozzari, deputy director of traffic operations for the California Department of Transportation in the Bay Area told “Civic” that when the spring 2020 lockdown began, “the amount of travel initially dropped maybe 80%. But it started building up, and around December of 2020 it started going up steadily to a point that the amount of travel that takes place on our freeways is pretty much about what we had before.”

Not all parts of the Bay Area are the same. The latest information from May of this year shows that the number of vehicle miles driven in San Francisco, San Mateo and Santa Clara counties is still lower than it was before the pandemic. The overall rate of time drivers spend in traffic jams is still down 44 percent from May of 2019.

The differences in who needs to drive to work and who could work from home has been evident during the pandemic.

Traffic reporter and producer Mark Pape with the Total Traffic and Weather Network has been watching the roads for decades. He noticed one slowdown that changed little during the pandemic.

“One is the commute from Tracy over to the Altamont Pass and into the Livermore Valley that has been slow even during the pandemic. It has a lot of people traveling from the Central Valley to get over into the East Bay and other areas of the Bay Area.”

In recent years, many moderate income workers have moved to the other side of the Altamont Pass for more affordable housing. A number of those include essential workers who were not able to work from home during the pandemic.

Pape said other major slowdowns include southbound Interstate 880 from Highway 238 into Fremont and the infamous back-up before the toll plaza on the Bay Bridge, although he said all of those back-ups don’t begin as early, don’t last as long and aren’t quite as slow as they were before the pandemic.

Nozzari said that low ridership on public transit may explain why traffic on the freeways has rebounded so quickly.

“BART, you know, is down maybe 60 or 70% SFMTA is down about 70%, AC Transit in Alameda, Contra Costa County is 63% down, and Caltrain is 91% down. So I would say until we have public transit usage restored, we’re going to continue experiencing similar levels of VMT and vehicle hours of delay.”

Pape believes that we have yet to see the level of traffic congestion and slowdowns that we saw before March 2020.

“A lot of the freeway traffic is moving pretty well where there used to be a lot of slow traffic. So until I think a lot of these businesses that are allowing people to work from home mandate that they have to come back to work. I don’t think you’re going to see the traffic patterns returning to pre-pandemic levels.”