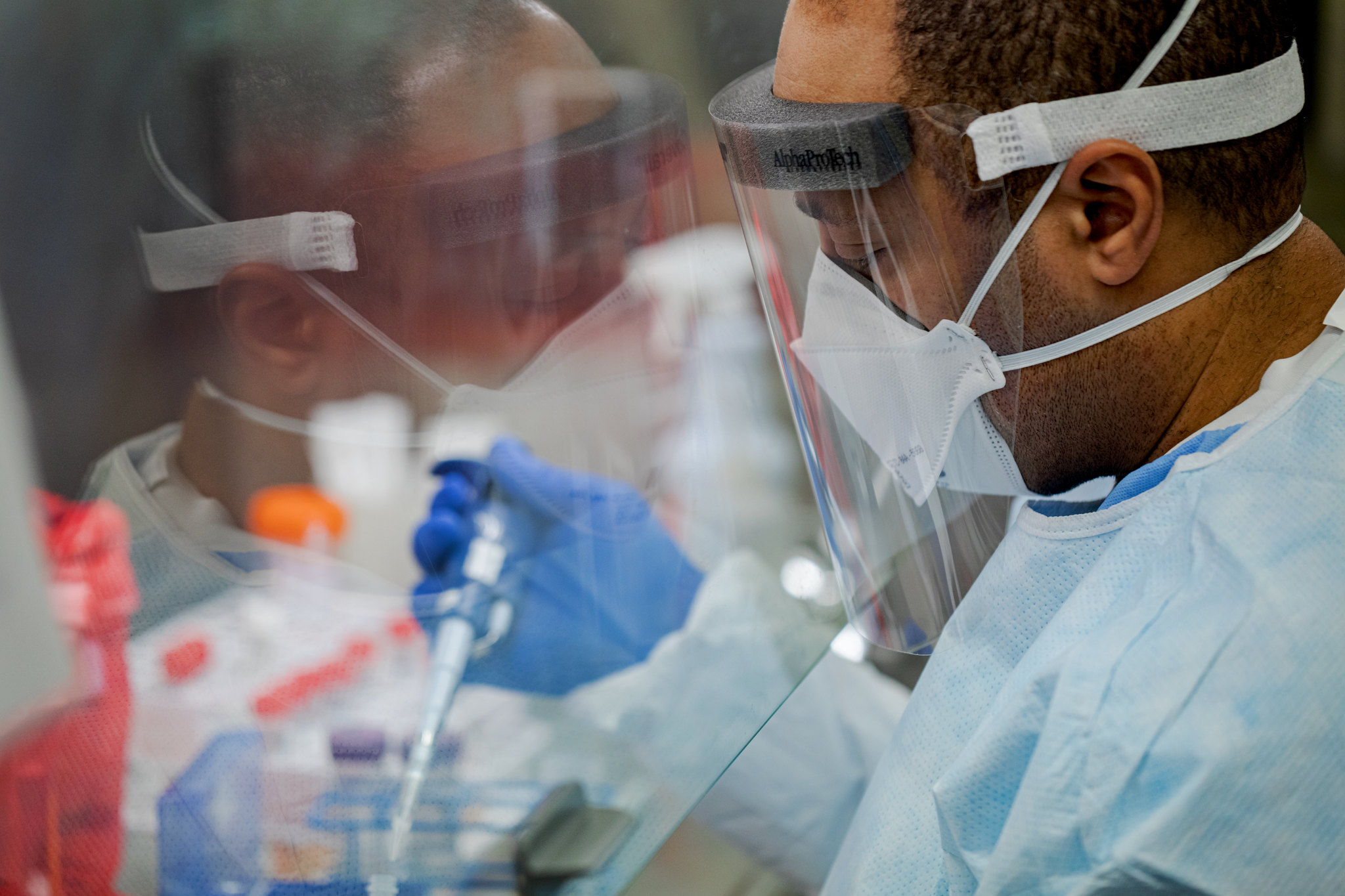 The United States has been slow to roll out widespread testing for COVID-19. Here, a microbiologist performs an extraction of the coronavirus in a Pennsylvania lab. Gov. Tom Wolf / CC By 2.0

Oakland-based Renegade.bio, created just four weeks ago, has raced to obtain federal authorization and develop tests, while also formulating a plan to make it easier for people to access the tests. San Francisco-based Carbon Health, founded in 2015, started gearing up to offer COVID-19 testing in February, and created a free online symptom tracker to help more easily and quickly identify those infected with the virus.

“Per capita, California has tested amongst the fewest number of people, and I’m not sure why that is,” Carbon Health co-founder and medical director Dr. Caesar Djavaherian said in an interview. “We don’t have fewer labs per people. We don’t have fewer scientists per capita, and we do have a very strong network of providers, like Kaiser.”

Just over 90,100 of the 35.9 million Californians had been tested for COVID-19 as of the end of March, or about 0.25 percent of residents, according to the California Department of Public Health. The department did not respond directly to questions seeking details about what its plans may be for ramping up testing, saying only, “We are working with both private partners and our public health labs to review and obtain rapid tests. May have more information on this for you in the near future.” Instead a public affairs representative sent a link to a press conference held by Gov. Gavin Newsom on April 2 via Twitter.

Laboratories in Germany, with a population of nearly 83 million, are conducting more than 50,000 coronavirus tests per day, according to an April 2 Financial Times report. Germany has performed at least 918,460 tests since the start of the crisis, covering around 1.1 percent of the population, the report said.

The public health department’s website shows that 22 public health labs in California are testing samples for COVID-19. The state is also partnering with Verily, a Google affiliate formerly named Google Life Sciences, which has launched a program called Project Baseline to expand screening for high-risk individuals in Santa Clara or San Mateo counties, or within 50 miles of Riverside or Sacramento.

Meanwhile, a team of UC Berkeley scientists and clinicians recently built a ‘pop-up’ laboratory that can process 1,000 COVID-19 swab tests per day, and San Francisco has added a new testing site. “As of this week in San Francisco, a COVID-19 testing site has become available at San Francisco General Hospital, which can perform around 100 tests per day,” said hospital spokesperson Brent Andrew. However, he added, “people should still contact their primary care physician or clinic” to get a test ordered.

Sprinting to build a new test

Like the rest of the world, Oakland-based scientist and self-proclaimed biohacker Craig Rouskey was glued to the news in early March as the pandemic unfolded – but the most salient update for him was the publication of a Centers for Disease Control primer and probe information for SARS-Cov-2, the name of the novel coronavirus. The primer covers a method for diagnostic testing that Rouskey and his circle of colleagues had the technical skills to use almost immediately to test people for the virus. The CDC primer provided the key that a lab would need to begin testing.

That was March 10. By March 15, his team, doing business as Renegade.Bio, had started running the first test samples, needed to prove to the Food and Drug Administration that the testing methodology was sound. Rouskey had just completed a stint with IndieBio, a biotech accelerator program in San Francisco, linking him to a network of people who had the necessary skills and access to a lab with the proper certification level to process human samples. Renegade.Bio was incorporated as a public benefit corporation, which means it’s legally required to consider how decision-making affects workers, customers and community.

As of March 22, Renegade.bio was still racing to obtain federal emergency use authorization, which would authorize the team to begin running diagnostic tests. Its plan is to partner with Bay Area Phlebotomy and Laboratory Services, which provides house calls for blood testing, to dispatch couriers in full hazmat gear to patients’ homes to administer swab tests.

Rouskey – whose experience includes developing vaccines for anthrax and designing HIV vaccines  – is aiming high, saying he envisions testing millions of samples within the next six months. He adds that he is heartened to see other labs doing the same, including those that can deliver test results more rapidly than the two hours his lab takes. “We need to test everyone,” he said, calling it the single most important priority for getting a handle on the virus.

Carbon Health started working to address the novel coronavirus in mid-February. That’s when “we had a patient come into our clinic who had recently come back from Wuhan City and was experiencing fever,” said co-founder Djavaherian, noting that patient couldn’t get tested despite displaying symptoms. “We were very frustrated,” he added.

After that experience, “we put all of our company’s energy onto trying to identify patients early,” he said. Carbon Health did that by creating an online symptom tracker and making virtual follow-up visits available to patients for $49 out-of-pocket, or free with insurance. The company, which offers online booking and other technology services to connect doctors and patients, had conducted nearly 1,000 tests across California as of April 1.

Having answers about whether they’re infected is critical not only for patients who might be in for a battle against a life-threatening illness, but for asymptomatic carriers who can easily and unwittingly pass the virus along to relatives, friends or strangers.

Due to the low number of tests conducted so far, “we’re not even quite sure how many patients are asymptomatic carriers of coronavirus,” said Djavaherian. “Having everyone stay at home quarantined is a function of not knowing who’s infected and who’s not.”

In response to a question submitted via the Twitter press conference about whether the state could do a better job at partnering with business to supply more personal protective equipment and expand testing, Newsom said he was inspired by businesses that had stepped up. He noted that “350 manufacturers have already committed to meeting this moment.”

The push by startups into this market could be an indication that COVID-19 tests will start to become more widely available in the months ahead. Still, there’s little information available as to what targets state health officials may have for expanding test availability, or for deepening partnerships with public and private labs.

As long as early and widespread COVID-19 testing remains elusive in California, it’s unlikely that shelter-in-place orders can be safely lifted anytime soon.

This article has been corrected to show that the HIV work Craig Rouskey performed was the development of vaccines. It has also been updated to include information on COVID-19 testing facilities in San Francisco.

Rebecca Bowe is a freelance journalist based in Portland, Ore. She's done a mix of print and radio reporting on topics such as climate change, regulation of California utilities, social-justice movements, police violence and local politics. Her work has appeared in the San Francisco Public Press, KQED News, the San Francisco Bay Guardian, the Guardian UK, and the Mountain Xpress. She currently works full-time at a nonprofit environmental organization.