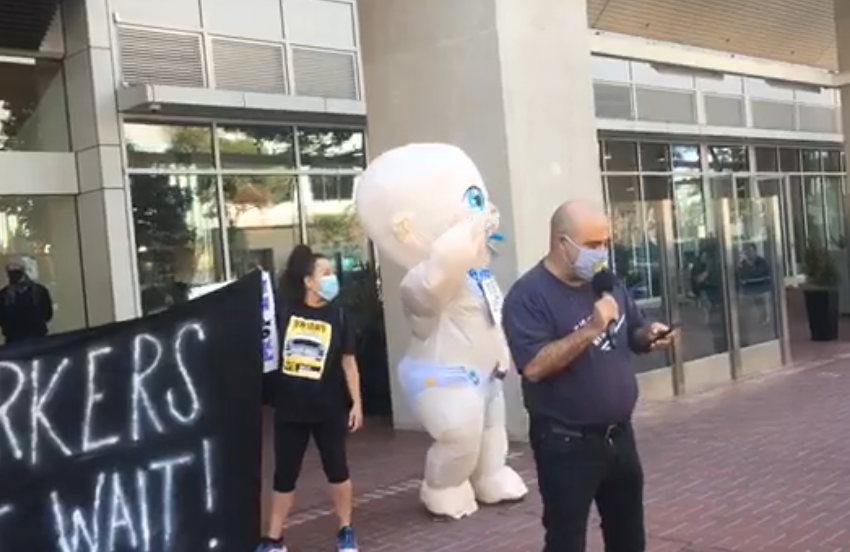 Courtesy of We Drive Progress

Drivers with Gig Workers Rising, We Drive Progress and Rideshare Drivers United assembled outside Uber headquarters on Thursday to call for labor protections.

Uber and Lyft were expected to shut down service at 11:59 p.m. tonight as a court ruling forcing them to reclassify drivers as employees was set to go into effect. With just hours to spare, an appeals court judge granted the companies a reprieve.

Earlier on Thursday, ride-hailing driver-organizers and activists gathered outside Uber’s headquarters in San Francisco. They distributed personal protective equipment and staged a car caravan as part of a rally to demand employee protections for drivers.

Organizations like Gig Workers Rising, We Drive Progress, and Rideshare Drivers United have been calling on Uber and Lyft to reclassify drivers as employees under AB 5, a state law that passed last year. The intent was to give gig workers protections like minimum wage, sick pay, and reimbursement for work expenses.

Last week, a California superior court judge issued a ruling that would force Uber and Lyft to comply with AB 5 by August 20. The companies argued they would need more time to make the significant changes necessary to convert drivers to employees, and therefore intended to temporarily shut down service in California.

“If they shut down, they’re gonna shut down because they want to bully us, they want to bully the drivers, they want to put pressure on us so we can vote for them,” said Rosa Mendoza, a ride-hail driver and gig worker, on Wednesday evening as the shutdown was still impending. She was referring to a pending ballot initiative the companies have promoted.

The companies asked for more time to comply, were denied, and then appealed. That appeal was granted Thursday, but with a requirement that the companies demonstrate that they have a plan in place to implement compliance with AB 5 if the ongoing litigation to force them to comply prevails and should Proposition 22, a state ballot measure, fail. The initiative, backed by Uber and Lyft, would give drivers some protections but maintain their status as contractors.

Both Uber and Lyft maintain that the majority of drivers want to stay contractors rather than become employees. In an email survey from a ride-hail drivers blog, some 71% of drivers surveyed indicated they would prefer to remain contractors.

Driver-organizers like Mekela Edwards disagree. She said the companies’ insistence that a contractor model offers more flexibility than employee status is misleading, because the nature of the work already puts constraints on drivers.

“You definitely don’t want to log on at 2 a.m. when there’s no passengers. There’s a time that you log on, there are rules that you have to follow, your star rating has to be in good standing,” she said. “There are so many ways that we have to comply with these companies, and so we are already employees.”

Uber said it had already made significant changes to the app to ensure drivers can continue to work independently under California law. “When over 3 million Californians are without a job, our elected leaders should be focused on creating work, not trying to shut down an entire industry during an economic depression,” the company said in a statement.

The Yes on 22 campaign has not yet responded to a request to interview drivers.