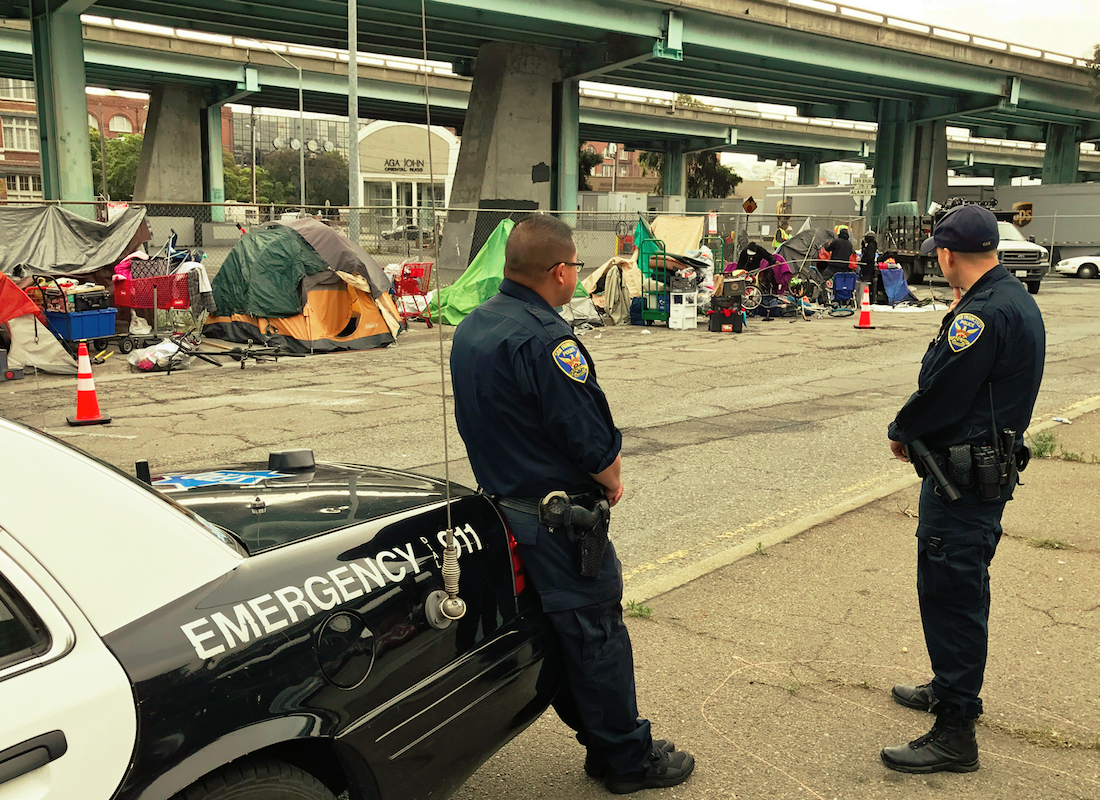 Police were a visible presence when an encampment in Potrero Hill was cleared in late May.

City crews this year have cleared — or “resolved,” in official parlance — 12 homeless encampments as part of the push to move people from the streets to housing of some sort.

Officials quickly learned that soon after a camp was cleared, a new one would often take hold in the same area. So in late March, the city quiety added a team tasked with preventing encampments from re-emerging.

The Re-Encampment Prevention and Response Team consists primarily of two members of the Human Service Agency’s Homeless Outreach Team as well as workers from the Department of Public Works and the San Francisco Police Department. The prevention team monitors areas that have been cleared, responds to citizen complaints about encampments that have reappeared and offers people living on the streets access to safety and services, said Randy Quezada, a spokesman for the Department of Homelessness and Supportive Housing.

But some who work closely with the homeless worry that involving police officers so heavily in prevention efforts disrupts the trust social workers have gained with encampment residents.

Quezada said the department created the prevention team to support another group, the Encampment Resolution Team, which was created last summer to get people to leave their camps so they could be dismantled.

“The thinking was that in addition to what was happening to resolve various areas, and whatever work we were doing with neighborhoods and other stakeholders to maintain the areas resolved, that there were additional sorts of things that the city could do to help bolster those efforts,” Quezada said in an interview. “And part of that was bringing together this team, which was dedicated to returning to the areas that have been resolved.”

A former worker with the Homeless Outreach Team and the resolution team, who spoke with the Public Press on the condition of anonymity for fear of reprisal, believes that the team was created because officials are worried about negative publicity from having homeless people reappear at seemingly “resolved” locations, particularly given the amount of money spent on the navigation centers.

“Once it became apparent that people would return to the same place each time … they said, ‘Well, we need a team to go out and dissuade the campers, the residents, from returning to the same exact spot, because it looks so bad media-wise to have the same exact characters, after a million dollars has gone into this project,’” the former worker said.

For fiscal year 2016-17, which ends June 30, about $9.4 million was budgeted for three navigation centers: $2.6 million for Mission Street, $3.1 million for the Civic Center Hotel and $3.7 million for the Central Waterfront facility, which opened in late May.

The former worker was also critical of how the re-encampment prevention team integrated the police department into the Homeless Outreach Team, fearing it would erode camp residents’ trust toward the outreach squads, which are not affiliated with the prevention program.

The source said the team would work with the police using a “good cop, bad cop” approach. The re-encampment team represented the “good cop,” warning residents that if they did not leave, they would risk having police dig up old citations or arrest warrants.

Most cleared encampments have not re-formed, though some people have tried to camp there again, Quezada said. The Encampment Resolution Team, created last summer, will still work to clear new encampments and provide their inhabitants shelter and services — temporary housing, a bus ticket to relatives in another city through the Homeward Bound program, a temporary stay at the city’s navigation centers or access to medical care and public benefits.

Quezada said that when the resolution team is dispatched, “police also mobilize to the site, but in a very 10-steps-away kind of thing, just in case something goes south. Thankfully nothing has.”

In early June, according to documents compiled by the Department of Public Works, there were 55 active homeless encampments in the city as of June 9. Last summer, the city combined several programs and contractors from different departments to form a new Department of Homelessness and Supportive Housing.

Because the prevention team is relatively new, data to evaluate its effectiveness are scarce.

Laura Guzman, a service provider and former member of  the city’s Local Homeless Coordinating Board, voiced concern about having police involved with the team.

“We need to actually minimize police intervention,” said Guzman, who in May retired as director of homeless services for the Mission Neighborhood Resource Center. “I think a re-encampment strategy is giving even more power to the police to do what they’ve been doing, which is to move people from one block to another.”

At the coordinating board’s April meeting, she requested information about the prevention team from Jeff Kositsky, head of the homelessness department, who said he would provide it at next meeting.

At its May session, Kelley Cutler, a social worker with the Coalition on Homelessness, reiterated Guzman’s information request. Kositsky acknowledged the team’s existence but declined to elaborate about the team’s purpose or functioning. He said that, in general, the homelessness department works closely with the police and Public Works when needed.

David Stevenson, the police department’s director of strategic communications, wrote in an email that 10 officers works with the departments of public health, public works and homelessness. Eight officers have received Crisis Intervention Team training to work with mentally ill individuals. He had no specific information about police officers working with the re-encampment prevention team.

In response to criticisms about the level of police involvement on the team, Stevenson wrote that dealing with homelessness “requires resources and participation from several city departments,” and that the department meets weekly and has conference calls daily with other city departments about homelessness. In general, he said, the police provide a “support” role in addressing homelessness.

Quezada rejected the idea that police involvement with the re-encampment team should be cause for concern.

“We’re not trying to enforce our way out of this,” he said. “We’re trying to connect people to services and resources.”

Zachary Benjamin is a student at Dartmouth College, majoring in English. He interned with the San Francisco Public Press during the spring of 2017, investigating both homelessness and the impact of the Trump administration on San Francisco. At Dartmouth, he is involved with the student-run newspaper, The Dartmouth, where he has served as a managing editor as well as a reporter for the news section.