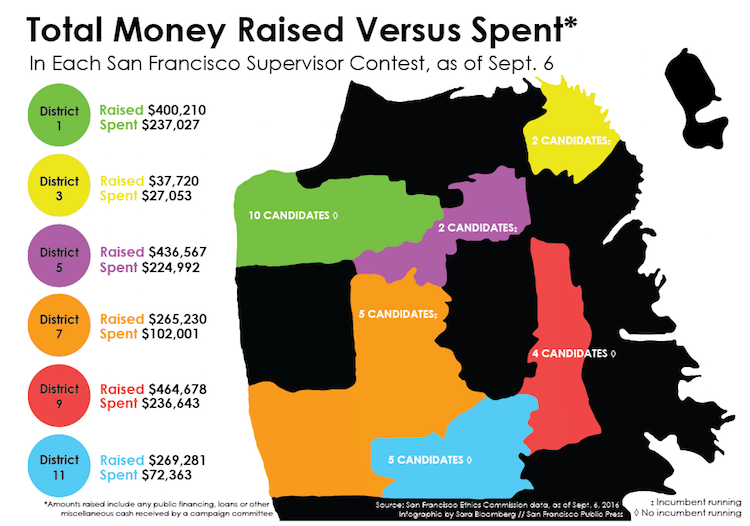 With two months until Election Day, more than $2 million has been amassed in the collective war chests for eight local candidate campaigns, 90 percent of which has been raised for six Board of Supervisors seats. Community college board and school board members will also be elected.

Since January, more than $8.77 million has been spent on all local races, according to San Francisco Ethics Commission records. Close to two-thirds of that — about $6 million — was spent just on the June primary, which included the Democratic County Central Committee races, five city ballot measures and contests for state assembly and senate.

As of Tuesday (Sept. 6), $1.9 million had been spent on the 25 local propositions that will appear on the Nov. 8 ballot.

Unlike ballot measure campaigns, which can solicit unlimited amounts of contributions from individual donors, local candidates can accept a maximum of only $500 from an individual.

This is where unlimited contributions to general purpose committees (a.k.a., political action committees or third-party expenditure committees) come into play. These PACs can raise and spend limitless amounts of cash in support of or against a candidate. In 2015, these types of committees spent around $1 million on just the District 3 supervisor’s race between Aaron Peskin and Julie Christensen.

Only two such committees have dropped money on the fall election so far, according to the most recent San Francisco Ethics Commission filings. “San Franciscans for a City That Works” has spent $30,932 in support of Marjan Philhour for District 1 supervisor and $12,964 in support of Joshua Arce in District 9. Both are considered the moderates in each race. In District 11, SEIU Local 1021 has spent $4,609 in support of Kim Alvarenga, its political director, who has the backing of outgoing progressive Supervisor John Avalos.

“San Franciscans for a City That Works” has spent more than $115,000 total this year, with contributions primarily from the San Francisco Police Officers Association and several other labor unions. (See the data here.)

Campaign contributions and spending will ratchet up in September and continue flowing through Election Day, driving the seemingly endless torrent of mailers and television ads. But with six seats open on the Board of Supervisors — and with them, moderate or progressive control — a few campaigns have been filling their war chests and spending big.

Overall, candidate campaigns have already spent close to $1 million — nearly half of what has been raised, according to Ethics Commission data as of Tuesday. Totals also include public financing, loans or miscellaneous cash received.

The 2015 election was the most expensive to date in San Francisco, with nearly $28 million spent on candidates and ballot measures, a Public Press analysis of campaign finance records revealed. This year is expected to match or exceed that total, given that voters will choose half of the Board of Supervisors seats and decide 25 local propositions.

See the summer 2016 issue of the Public Press for the full report: The Rising Cost of Winning Votes

Here is a breakdown of the spending so far in the 2016 candidate races:

Marjan Philhour, a political consultant who lost her reelection bid for the Democratic central committee in June, has collected nearly $200,000 in contributions and cash. Sandra Lee Fewer, a San Francisco School Board commissioner, has a bit over half that amount: $120,178. Philhour has also outspent Fewer by 3-to-1: $134,131 to Fewer’s $44,688. Also notable: the Democratic committee has endorsed Fewer. David Lee, who lost to Mar four years ago, has raised $39,578 and spent $15,847.

Supervisor Aaron Peskin, who held the seat from 2005 to 2009 and was board president, beat mayoral appointee Julie Christensen last November for the seat that former Supervisor David Chiu vacated when he was elected to the State Assembly in 2014.  Tim E. Donnelly, a residential property manager, is challenging Peskin for a permanent, full-term seat but has not raised or spent any money, according to campaign finance records. Peskin has raised $37,720 and spent about two-thirds of it —$27,053.

Board of Supervisors President London Breed has out-raised and outspent Dean Preston, a housing rights advocate and former civil rights lawyer. Breed has raised $253,915 to Preston’s $182,652, including cash on hand. Breed spent $121,451, about $18,000 more than Preston.

Supervisor Norman Yee has gathered as much as of all of his challengers combined: $129,008 to $130,122, and has spent $52,345. Ben Matranga, a “senior advisor” with the city and county who formerly served as a San Francisco Youth Commissioner and investment officer with the Soros Economic Development Fund, has raised $65,999 in contributions and cash and spent about half: $27,902. Joel Engardio, a content marketer and San Francisco Examiner columnist, has the next largest war chest — $47,416, of which he has spent $8,564.

The City College of San Francisco board is responsible for making policy and budget decisions for the school, which has been operating with stabilization funding from the state as it works toward maintaining its accreditation. The candidates have a collective war chest of $69,888, of which they have spent $42,170. Challenger Tom Temprano has raised $28,083 and spent $19,780 the most, followed by current Board President Rafael Mandelman, who has spent $10,749 of his $15,590 in contributions.