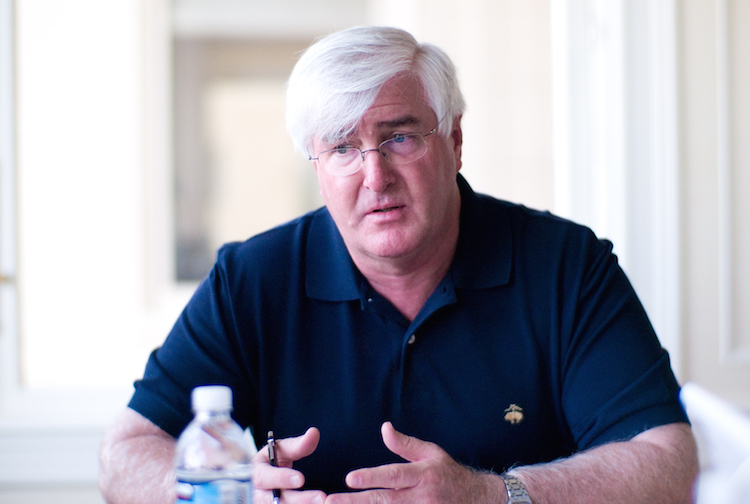 Tech mogul Ron Conway has been involved in San Francisco politics for years, advancing tech interests at City Hall and raising money for and against candidates. Photo by Joi Ito / Wikimedia Commons

As much as Nevius tries to distinguish between everyday, disinterested “techies” and their behemoth employers, he conflates the two and misses a huge point: the tech industry is, and has been, very interested in and deeply involved with local politics, which the Public Press has reported on in a special report on the influence of money in San Francisco elections.

Airbnb, now valued at about $30 billion, dropped $9 million in 2015 to defeat Proposition F, which would have imposed stricter regulations on its room-and-home rental platform and threatened some of its income.

In addition to its misleading media campaign against the proposed law, the company ran a smug, tone-deaf ad campaign insinuating that San Francisco should be thankful for the taxes it pays — taxes it fought tooth and nail to avoid paying.

Then in early 2016, Airbnb formed an independent expenditure committee called the “Committee to Expand the Middle Class,” which is overseen by Mayor Ed Lee’s former campaign treasurer, Kevin Heneghan — who now works for Airbnb as a corporate lawyer.

Maybe Nevius’ attempted point is that this is not effective “grassroots” engagement. That tech companies need to really, really pound the pavement and get politically involved.

But behind a veneer of social responsibility, they are business entities, ultimately accountable first and foremost to investors and shareholders as they seek to boost and protect their bottom lines above all else.

Last year, tech mogul Ron Conway, a friend and ally of Lee, emailed the CEOs of the companies he invests in and encouraged them to share his ballot picks with their employees — not just get out and vote, but to vote his way, the 21st-century version of old-fashioned paternalism in the workplace.

In 2012, Conway founded San Francisco Citizens Initiative for Technology and Innovation, or sf.citi for short, which “leverages the power of the technology community around civic action in San Francisco” and “represent(s) the tech sector in conversation with city policy makers,” according to its website.

Conway is also an investor in Brigade, a tech startup which aims to make it “easy to find nearby voters who are passionate about the same national and local issues you are, so you can influence policies and elections together,” according to its website.

David Talbot, the founder and former editor of Salon, has publicly questioned whether Brigade is really about civic engagement, or if it’s just another mechanism for Conway to assert political influence.

Apple CEO Tim Cook has courted politicians on both sides of the aisle for years.

Pandora is one of the very few examples I’ve come across doing anything near what Nevius has suggested. The Oakland-based music streaming service doesn’t provide free, in-house meals, encouraging its workers to venture out into the neighborhood to eat and connect with the community.

While that’s not explicitly Politics with a capital P, it’s an attempt at being a good neighbor, and part of the community where the company has set up shop.

With few exceptions, tech companies are highly involved in politics and simultaneously uninterested in truly engaging with communities on a grassroots level.

Nevius quotes a tech industry representative who tries to explain why Uber and Lyft lost a recent political battle in Austin, Texas. However, in attempting to explain how tech companies need to soften their approach, Barbary Brunner, CEO of the Austin Technology Council, actually underscores tech’s persistent bottom line:

“I compare them to a bad American tourist in France,” she said. “If you speak slowly and raise your voice, you will be understood and they will be conquered. They ended up spending $9 million to lose an election, when they could have spent $900,000 and won.” (emphasis added)

Conquering is not grassroots political engagement. What tech understands is the power of money. And what tech wants is fewer and lax regulations to keep the money flowing.