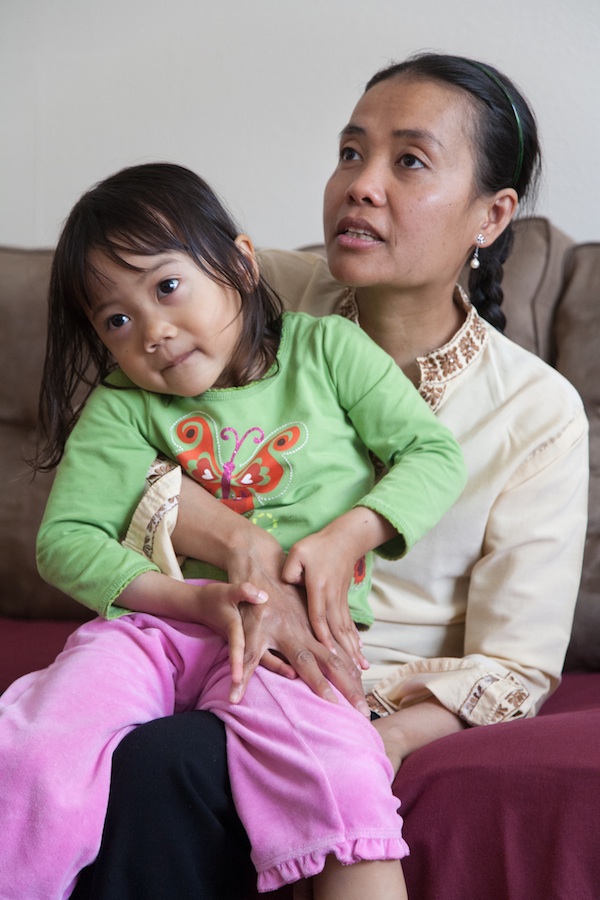 Some who flee captive labor conditions end up with low-wage jobs, insecure housing

When Lili Samad was hired to work as a nanny for an Egyptian government official in the Bay Area, she thought it was an ideal job. Instead, she said, she was forced to work long hours doing domestic chores and forbidden from contacting her family in Indonesia and was often locked inside the house.

“First when I arrived there, they treated me like a prisoner,” Samad said.

After almost 3½ years, for which she was paid just $1,000, she sought help from a neighbor she had met a few times. She said the neighbor concealed her in the back seat of a car and took her to a police station.

But after she escaped, Samad faced a whole new set of challenges: finding housing and a stable job to pay for it. Samad stayed with the neighbor for a few months before moving to the Asian Women’s Shelter, a San Francisco nonprofit that provides temporary housing for women who have suffered violence. There, case managers connected her to community rehabilitation services for victims. Still, the road to recovery was rocky. Over the course of six years, she lived in four temporary apartments before settling down in subsidized housing.

People trafficked into the country — through force, fraud or coercion — receive temporary government and nonprofit social service benefits after rescue or flight from captivity. These include shelter, health care, counseling, employment and legal help. Victims are helped to stay here in exchange for cooperation with law enforcement, and because they might face retribution from trafficking rings if they returned home.

But once these benefits term out, counter-trafficking specialists worry that victims, who generally have little work experience and weak social and family networks, could fall back into labor conditions as exploitative as the ones they fled.

As a victim of international labor trafficking, Samad received government help to stay in the U.S. But she is among hundreds of trafficking survivors each year who end up, months after getting help trying to build a new life, living in marginal housing and working in low-wage jobs.

Samad, who works part-time as a waitress at an elder care facility with her husband and lives in a low-income public housing unit in the Bay Area, said their combined income is only sufficient to pay for basic needs.

“We cannot spend on other things, so only food and rent,” she said.

From fiscal year 2002 through May of this year, the U.S. government issued 3,042 visas for trafficking victims, called T-1 Nonimmigrant Status visas, data from the U.S.

Citizenship and Immigration Services show. These provide temporary protection and a chance to apply for permanent residency for those trafficked from foreign nations.

Experts say it is difficult to identify and quantify the number of victims in this country or those who are re-exploited. Not all victims of sex or labor trafficking seek help from government agencies or community groups. And international trafficking incidents in the U.S. are diverse. They can involve the exploitation of farm laborers by contracting companies, the abuse of domestic workers by foreign diplomats and the coercion of people into prostitution by pimps.

Traffickers often hide victims in their homes, brothels, boats or other clandestine locations.

A recent in-depth academic study by researchers at the University of Texas, Austin and North Carolina A & T State University, looked at women in Texas who had been trafficked from other countries. It showed that victims need targeted, long-lasting and culturally sensitive services to help them rebuild their lives.

Almost all of the women interviewed for the study now work in restaurants, hotels and other service jobs. This presents a challenge for their rehabilitation, said Noël Busch-Armendariz, director of the Institute on Domestic Violence and Sexual Assault at the School of Social Work at the University of Texas at Austin, and one of the authors of the report, published in the Journal of Applied Research on Children.

One of the long-term needs of trafficking survivors is acquiring new life and professional skills, so they can move toward jobs that give them more security and income, Busch-Armendariz said.

“If we don’t give survivors and their children ways to fully integrate, ways to be self-sufficient, they could continue to be targeted as somebody who could be exploited,” she said.

A 38-year-old single mother from the Philippines, who requested that her name not be used, said she came to the U.S. to work as a housekeeper for an ambassador from Africa more than three years ago. But as soon as she arrived in New Jersey, her employer seized her passport and work contract.

“The first thing that made me scared is they said their house is alarmed — if I open the door, the alarm will go off, and the police will arrive and take me away,” she said in her native Tagalog through an interpreter.
The woman said her employer paid her $1,000 per month for working 17-hour days, threw a fork at her in a fit of anger and made her scrub the kitchen when she was ill. “I was so scared,” she said. “I was always nervous. I was feeling sick.”

With the help of the ambassador’s driver, she contacted the Damayan Migrant Workers Association, a nonprofit group in New York City, which helped rescue her.

She said finding work has been difficult, and potential employers fear her trafficking background. She now works as a part-time nanny, but the pay is not sufficient to support herself.

“In truth, it’s short,” she said. “Not enough. My part-time work is just enough for the housing. There’s no health insurance.”

Community groups say survivors run the risk of re-exploitation if they work in sectors that are not properly regulated.

“This is especially true in the domestic worker industry, but any kind of informal sector where people are kind of more hidden from sight,” said Cindy Liou, staff attorney and coordinator of the Human Trafficking Project at Asian Pacific Islander Legal Outreach, a nonprofit organization in San Francisco that provides legal services for victims.

“It’s not uncommon that some of our clients sometimes come back to us with wage-and-hour questions, and we refer them out to the Employment Law Center and other places usually so they know their rights,” Liou said.

County, state and federal governments offer a variety of temporary benefits to help smooth the way to rehabilitation for victims of international human trafficking.

Some states, such as California and New York, have approved short-term benefits to assist trafficking survivors in the process of qualifying for federal benefits.

The maximum benefit for single adult T visa clients in San Francisco is $422 per month, which includes a county supplement of $105, said Josef Bruckback, eligibility manager of the state’s welfare program CalWorks at the Human Services Agency in San Francisco. Clients with children receive benefits through CalWorks and are eligible for services for up to 48 months.

“The overarching problem is that once they time out of those benefits, they’re really left on their own,” said Denise Brennan, associate professor and chair of the department of anthropology at Georgetown University in Washington, D.C. “It’s a very short time frame. It’s not likely that they have built a social network that could fill in where the government support leaves off.”

Survivors generally find work in the same labor sector they worked in when they were trafficked, Brennan said, and it’s usually low-wage work, limiting their economic mobility.

“What I think is really quite concerning is that over time, some of the first T visa recipients who now have green cards are just treading water,” she said. “Just in the past six months, I’ve heard about some folks who have lost their jobs.”

Trafficking survivors often have difficulty finding an economical place to live in the long term. Some migrate from shelters to transitional housing until they can secure an affordable room or apartment. Others find temporary accommodations by working as live-in nannies.

A 64-year-old woman, who requested that her name not be used because she feared her former captor, said she came to California from Peru because her brother-in-law offered her work as a nanny to take care of his granddaughter. But he made her cook, wash, clean, garden and do other domestic work for about 14 hours a day, and restricted her from getting in touch with her family, she said.

“He invited me to come over here with the promise of work, and that he would support me in everything, but it wasn’t like that. It wasn’t true,” she said in Spanish through an interpreter.

After he released her from his house more than a year later, she found work as a nanny for a family in the Bay Area, who provided a space for her to stay in their home. She said she has lived in low-income housing apartments and has worked low-wage jobs at stores and cafes in the region since then.

She now earns $11 an hour working at a chain supermarket and lives in a subsidized apartment with her son.

Community organizations that provide shelter and rehabilitation services for international trafficking victims say finding both short-term and long-term affordable housing is difficult, and without proper housing, they could be at risk for re-victimization.

At the Asian Women’s Shelter in San Francisco, case managers start looking for housing once the victim has stabilized and recovered from the trauma, said Hediana Utarti, the group’s community projects coordinator. For trafficking survivors in the process of applying for a T visa, they look for housing that meshes with the government benefits.

“It’s very, very tight, but we would look for a place where maybe they can share with other people,” Utarti said. “Usually we are able to find something like a live-in situation, like help with the elderly.”

Those situations often work as barter: trafficking survivors provide support for elderly people who give accommodations in return. Survivors sometimes find these work opportunities on their own through friends.
While most of the time this type of arrangement works, employers have been known to abuse the trafficking survivors by making them do more work than they signed up for, or not giving any breaks during their shifts, Utarti said.

When this type of re-exploitation occurs, case managers advise the trafficking victims to talk about the situation with their employers. “If need be, then we’ll do intervention,” she said.

In San Francisco, case managers also work with the city to identify space in single-room occupancy hotels, and if the clients have children, they look for housing in transitional facilities, such as the Compass Clara House, Raphael House and Hamilton Family Center.

Clients can stay for up to three months, but the Asian Women’s Shelter provides extensions for clients unable to find housing, to ensure that they do not find themselves on the streets.

“If they end up in a homeless shelter, then they’re going to go back to the whole cycle again — re-abuse,” Utarti said. “And we don’t want to do that.”

This story was made possible by a grant from Atlantic Philanthropies and was produced as part of New America Media’s Women Immigrants Fellowship Program. Find out more at newamericamedia.org.