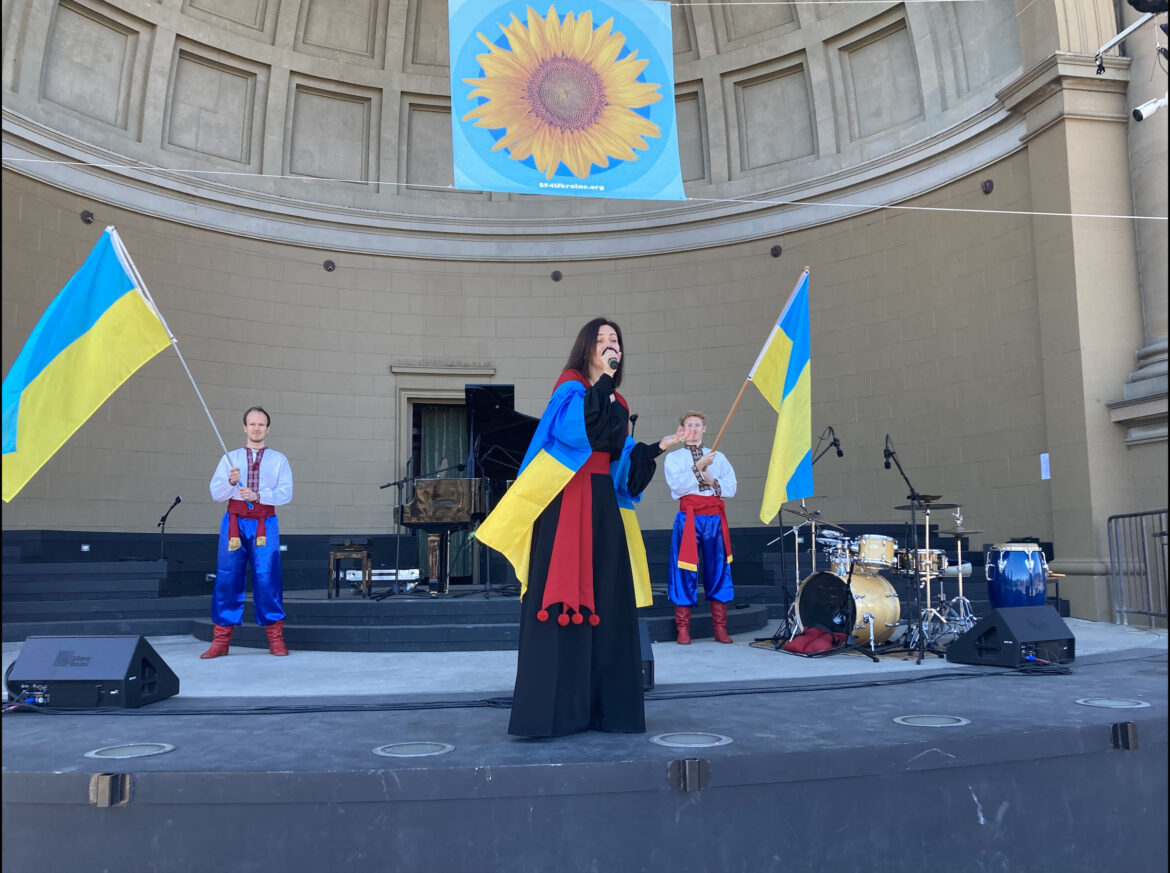 Ukrainian singer Anytchka performs “Slava Ukraini,” the national anthem, at a concert benefit in Golden Gate Park on March 12. Proceeds go to the World Central Kitchen, which is helping to feed those fleeing Russia’s attack.

Members of the Ukrainian diaspora in San Francisco are angry, anxious and desperate to connect with loved ones in their ancestral homeland. Meanwhile, a local aid agency is asking for help as refugees begin arriving in the Bay Area.

On a sunny weekend afternoon in mid-March, hundreds gathered at the bandshell in Golden Gate Park music concourse for a show called Slava Ukraini — or Glory to Ukraine. It was a fundraiser for the World Central Kitchen, which is helping to feed Ukrainian refugees.

Kate Nils and her sister Svetlana Rosen were there handing out sunflowers — the national flower of Ukraine. They were born in Odessa and have been in San Francisco for more than 25 years.

Nils said she was thinking of her childhood friends.

“They keep hiding several times a day when they are told to,” she said. “Talking to them and having them communicate with me through a bomb shelter is just heartbreaking to even — it’s like, I have no words. I can’t believe it’s the reality that we live in.”

Census estimates show that about 40,000 Bay Area residents were either born in Ukraine or have Ukrainian ancestry. And nearly a quarter of them live in San Francisco. For more than a month, they’ve been anxiously communicating with friends and relatives in Ukraine, desperate for any news that lets them know their loved ones are safe.

Diana Osolenko, a student at Chabot College in Hayward, moved to the Bay Area from Ukraine four years ago. She and a friend were at the fundraiser holding signs: “NATO close the skies over Ukraine” and “I need ammunition, not a ride, signed Zelensky.”

NATO hasn’t heeded Ukraine’s call to “close the skies” over the country. It’s feared that would ignite a war between Russia and the allied countries. Instead, the alliance has focused on delivering humanitarian and nonlethal aid to Ukraine. Individual NATO countries are also sending weapons and other military equipment, including cybersecurity and protection against chemical, biological and nuclear threats.

Osolenko said she was intent on debunking Russian disinformation that’s convinced many Russians that Ukraine is responsible for the conflict.

Russian President Vladimir Putin has made it illegal to report on events in Ukraine that do not correspond with Kremlin accounts. He has even made it illegal to call it a war at all. But some Russians are risking their own freedom to get the truth out to their people. One protest made headlines worldwide. On March 15, Marina Ovsyannikova, an editor at the Russian state-controlled Channel 1, was detained after she ran onto the set  holding a sign that read “No War.” She was detained for 14 hours and fined 30,000 rubles — about $280.

Nevertheless, Osolenko’s family members living in Russia are convinced that Ukraine is to blame for its own destruction.

“My family says they just can’t talk to them anymore because they blaming Ukrainians, they say bad words. They swearing really well, saying ‘How dare you?’” Osolenko said. “I’m angry. I’m mad. Like, my voice is trembling. The one thing I know — that Russian and Ukrainians will never be the same.”

Conflicts like these are also happening in San Francisco. There have been news reports about tensions between Ukrainians and Russians in the city’s Little Russia neighborhood. One owner of a Russian-goods shop told the San Francisco Examiner that his customers have been arguing. He said he would like to fly a Ukrainian flag to show his support, but he is afraid Russian backers will break his windows.

That tension was evident in Golden Gate Park as well. Yevgeniy Freyman, a Ukrainian American zoologist who has been in San Francisco for 28 years, said he could not contain his anger.

“I’m extremely aggressive, extremely impolite with this problem,” he said “I love my former country. I have tons of friends who still suffering and still living in a very, very nice, beautiful city of Kharkiv, who is completely demolished, completely destroyed. One of the biggest scientific and educational and industrial cities right now, ruins, basically ruins. People living underground on subway, in the basement. And this is unbelievable.”

More than 4 million Ukrainians have fled the country. On March 24, President Joe Biden announced plans for the United States to accept 100,000 Ukrainian refugees.

Several San Francisco-based companies have offered to help Ukrainian refugees. Wells Fargo announced a million-dollar donation toward organizations helping in Ukraine. And Levi Straus is mobilizing employees across Europe to share their spaces with refugees through Airbnb.

Airbnb has offered free temporary housing to 100,000 refugees in Europe, in partnership with Palo Alto-based nonprofit Nova Ukraine. The company has partnered up to use its software and expertise to connect refugees who need housing with people offering it.

Igor Markov is a director for Nova Ukraine, which has been sending humanitarian aid to his native country since 2013. While juggling his ever-expanding responsibilities, Markov is also trying to keep track of his own family stuck in the middle of a war zone.

“There’s a group of eight people there and there’s some elderly people among them,” he said. “We discuss what happens if fighting comes close to where they live, to move, but it’s not always possible because sometimes people feel sick, and sometimes they really cannot get into a car. And so, it’s just heartbreaking to hear all this.”

Nova Ukraine is mobilizing volunteers to get medical equipment into the country, according to Markov.

“Most of the supplies into Ukraine are going through Poland, and this requires drivers in Ukraine,” he said. “Males 18 to 60 cannot leave the country. And so, the drivers from Ukraine are women and men over 60.”

They are risking their own lives in the process. Markov said that in late March, he received a picture of one of their transportation vans destroyed by shelling.

“Fortunately, no one died,” he said. “But all the food that was there was scattered on the road. And people did get wounded who were in the minivan.”

He said that despite the violence, the volunteers won’t be deterred from their mission. “They’re not stopping. They’re continuing.”

Nova Ukraine has been bringing refugees to the Bay Area. Markov said some of them are showing signs of post-traumatic stress disorder.

“These people need rest, they need to recover, because they are still under shock,” he said. “I’ve seen cases where a fire truck would drive by, and their reaction was as if this was an air-raid siren. They understand of course that they’re in the U.S. There’s no bombing. But just the reflexes, the reactions are unmistakable.”

He said the refugees are also in a state of anxiety over the loved ones they left behind.

“There are children, with mothers whose dads are still in Ukraine and fighting,” he said. “There are elderly people who have to relocate because it’s not safe there. But they don’t always get the care and the living conditions that they need at their age.”

Markov said he had no idea how or when Russia’s attack would end. But what is certain is that help will be needed for a long time to come.

Nova Ukraine is also holding a joint fundraiser with UNICEF to help the children of Ukraine. Go to give.novaukraine.org/unicef to find out how to donate.

Markov said it also helps to show solidarity by using #StandwithUkraine in social media feeds and by flying Ukrainian flags. And he suggested boycotting anything made in Russia.