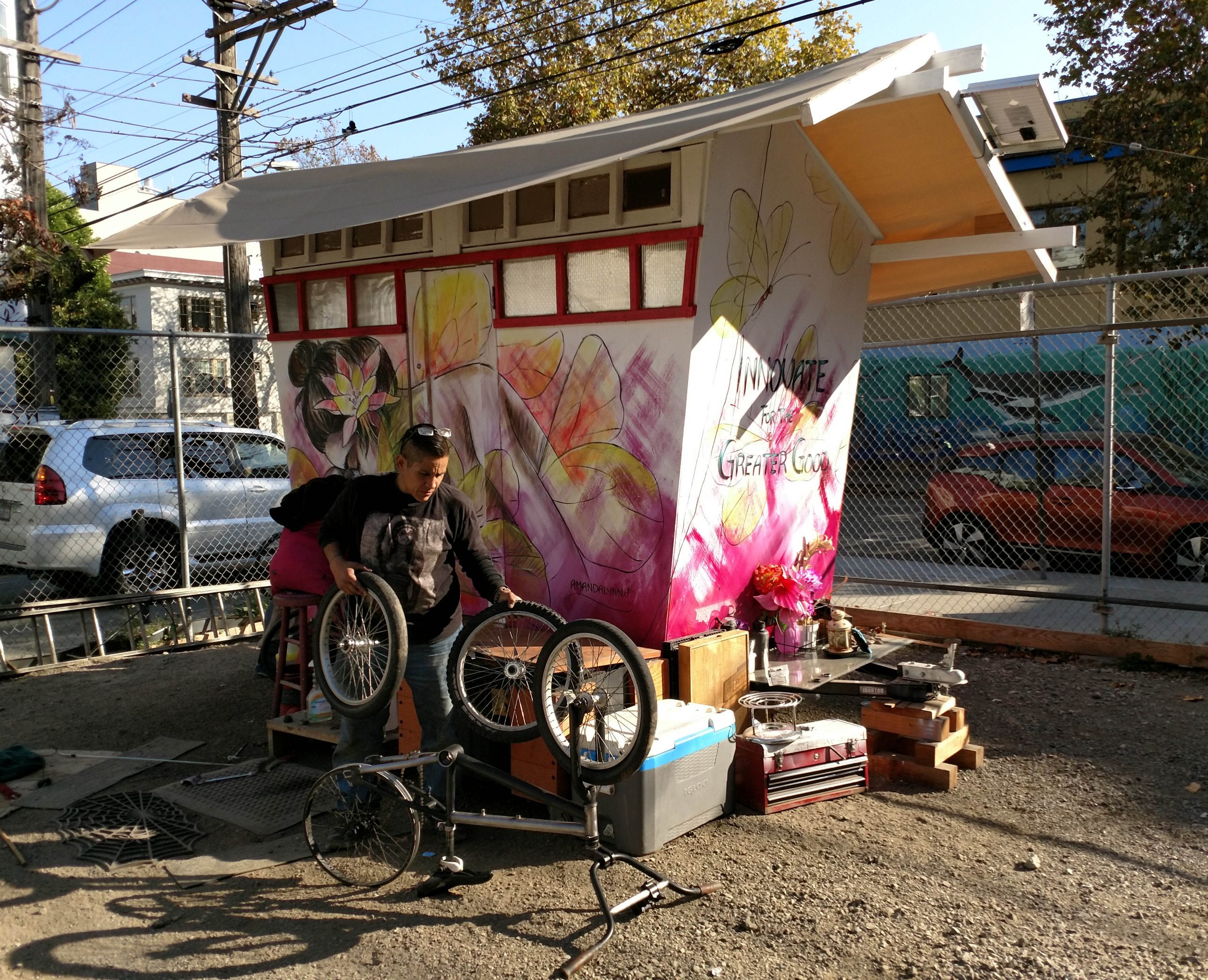 Shanna Orona in front of her "transitional shelter" in the lot behind Impact Hub San Francisco, which is letting her stay there for free. Photos by Noah Arroyo // Public Press

Shanna Orona, a 44-year-old retired firefighter, calls herself a “guinea pig.” For the foreseeable future, she said, how she handles herself is “either going to make or break” a private pilot project that envisions housing homeless people in tiny dwellings in San Francisco.

Since July, Orona has been the lone resident in a 5-by-8-foot “transitional shelter” in the Mission District, a housing approach inspired by experiments in Seattle and designed by Amy Farah Weiss, founder of the nonprofit Saint Francis Homelessness Challenge. The Impact Hub San Francisco, an event and co-working space, has agreed to keep her box home on their premises, and she can come and go as she pleases. There is no deadline for her to vacate, allowing her to comfortably live, do volunteer work and take her time hunting for an apartment she can afford.

In the past 15 months, Orona said, she has looked at 98 places and submitted applications at 59. She has good credit, but many apartments’ monthly rents hover around $1,200, out of her price range. “I’m tripping that I don’t have a place yet.”

“I just want permanent housing. I just want a place to be,” said Orona, who goes by the name Couper and who had been living on the streets for three years before moving in to Weiss’ shelter. “I want to feel safe and secure and stable. That’s my main goal.”

Orona is just one of the many homeless people who have stayed temporarily at the city’s navigation centers and returned to the streets when their time ran out. When the first center opened in 2015, people could stay there indefinitely while receiving services and waiting to be placed in permanent housing. But in September 2016 that model shifted, instituting stays of 30 days — later expanded to 60 days — and returning an increasing number of people to homelessness.

See: “More Returning to Streets From Navigation Centers” in the summer edition of the Public Press

Weiss is trying to create another place for people to land when their stays at the centers are over, instead of back to benches, tents or makeshift boxes on sidewalks.

“This could be a next step,” Weiss said.

If the pilot project goes well, Weiss hopes the next iteration will be a “village,” with up to 15 shelters, housing 20 people on public or private land. She is raising money through the online donation service HandUp. So far, she is about a quarter of the way toward her $65,000 goal.

She is trying to gain political backing for the model. No supervisor has publicly voiced support, she said, but District 6 candidate Sonja Trauss has, along with local organizations who have helped the project get off the ground.

Weiss launched a petition for “safe, organized spaces” — sites that are alternatives to encampments, such as the city’s shelters and navigation centers, or her model. The petition lets people express a desire to see more of these sites in San Francisco and suggest their locations, such as empty lots awaiting construction or their own properties. This information may help Weiss locate owners who might host villages for free, as Impact Hub has done.

Scaling Up to a ‘Village’

For the past two years, Weiss, who challenged Mayor Ed Lee in the 2015 election, has been checking the legal and logistical boxes to make her transitional shelter become a reality.

An inexpensive, fire-code compliant, mobile structure that can house a single person? Check. A property owner willing to go out on a limb and host that person onsite? Check. Insurance for the owner and Weiss’ organization? Check. A written agreement between the tenant and property owner, outlining the daily dos and don’ts? Check. Portable restroom, with biweekly servicing? Check.

The experiment’s monthly costs are minimal, in large part because Impact Hub is hosting Orona at no charge. Monthly insurance costs $180, servicing the toilet is $70.

The multi-unit versions of the model would carry higher costs, but the per-person expense is projected to drop. If the residents and property owners agreed to it, then the site would largely manage itself with help from part-time staff. Things like garbage service and gym memberships — which would provide residents access to showers and exercise — would bring the total monthly tab for a five-shelter, seven-person site to $10,330, or about $1,475 per person, with other one-time setup expenses of $15,000. A 15-shelter, 20-person site would cost $12,230 per month, or about $610 per person, with one-time expenses of $45,000.

The biggest ongoing expense would be a part-time vocational and “transitional” coach. This person could assist in job hunts, designing personal budgets or obtaining high school equivalency degrees. The coach would help people figure out their long-term housing goals and make game plans to attain them, working around potential factors like a fixed income, criminal record or previous eviction.

On paper, Weiss’ model appears cheaper than the city’s navigation centers, which contain 352 beds primarily for temporary stays. A 2015 report from the city Controller’s Office showed that during the first six months of operation, serving one person in a navigation center cost $69 per day, or about $2,070 for the month. But the centers provide more than what Weiss envisions initially for her villages: meals, showers, a broader array of social services onsite and paid full-time staff who maintain security.

The Impact Hub’s neighbors have embraced the project by helping Weiss and working directly with Orona. In addition to support from Trauss, the model is backed by Potrero Hill Democratic Club President Tony Kelly, among others.

“I think everyone outside City Hall is in support of getting our houseless neighbors off the sidewalks and streets and into safe, clean sites where they won’t be harassed or displaced,” Kelly said. This year’s Point-in-Time homelessness count, conducted in January, showed that 4,353 unsheltered homeless individuals were living on the streets, in cars or in other places not meant for habitation. That is almost identical to the previous unsheltered count, in 2015.

Trauss said she has been pushing the idea of regulated living spaces for homeless people for the past two years. It has become increasingly popular in her political circles, and now during her campaigning. The fear that sanctioning these spaces would institutionalize them is one that she encounters less frequently.

“It’s already institutionalized, because we have city social workers telling people, ‘leave the navigation center and sleep outside.’ So it’s part of the institution,” she said, “I just think it could be a better, more functional institution.”

Alex Ribbons, 29, who was born in San Francisco and has been on and off the streets for 13 years, said he knew many people who would want to participate in Weiss’ project. “I’m a hundred percent for it,” he said, adding that his favorite part is the portable toilet.

“When I can’t even go and use a bathroom without buying something, that’s a problem,” he said. “But also I understand that they don’t want people going into these bathrooms, shooting up, overdosing.”

Still, Ribbons said that the model is not for everyone on the street — including him at this point in his life. He said he planned to enter a drug detox program soon.

“If I’m a junkie trying to get clean,” he said, “who and where am I not going to want to be around? Junkies and, you know, the dope lot.”

Weiss said her village model might shift to accommodate the specific needs of residents, including those battling addiction. But she knows it may not be a good fit for every homeless person. That is why she plans to focus on those who have gone through the navigation centers — they presumably got accustomed to following rules, such as no drugs, and could partially manage and police themselves.

“Also, like I always say, living in community is challenging,” Weiss said. “Whether you live in an encampment, a transitional village, navigation center, SRO, group housing or condo. Reasonable agreements and systems of accountability make it easier.”

Impact on the Community

In concept, Weiss’ transitional village looks almost identical to a sanctioned or government-permitted encampment. Hers has one key difference, at least at this point: no tents, which have been stigmatized by drug use, accumulations of junk and occasional fires. To some extent, this is about branding.

See: “Will San Francisco Embrace ‘Sanctioned’ Camps for the Homeless?”

See: “How Pacific Northwest Cities Have Made Space for Homeless Encampments”

Seattle calls its six sanctioned sites “permitted encampments.” The nonprofit Low Income Housing Institute, which operates many of those sites, refers to some as villages and others as encampments.

It is the “sanctioned encampment” to which Jeff Kositsky, the director of San Francisco’s Homelessness and Supportive Housing Department, has voiced strong opposition. In a February conversation with the Public Press, he said that experiments in Seattle and other cities had “failed miserably.”

When asked about Weiss’ pilot project in October, Kositsky said he did not know what it was. Weiss, however, said afterward that she has shared the idea with him many times. Kositsky did not respond to a follow-up request for clarification.

In June, Seattle published a two-year evaluation of its permitted encampments that found they caused “no significant increase in crime” in the surrounding areas. “There is some evidence of increased numbers of people who come to the neighborhood in search of a safe place to stay and this could contribute to some negative public perception of the encampments,” the report stated.

Additionally, the community appeared to warm toward the camps over time, though this was based on anecdote, not data.

Life on the Street

Orona said she first learned about homelessness when she was a child in East Los Angeles. Since then, she has been without a stable home off and on for a total of about 14 years.

While a firefighter in Sacramento, she suffered a debilitating back injury inside a blazing building, forcing her to retire. She eventually moved to San Francisco in the early 2000s and lived in a condominium in Diamond Heights. “I drove an Audi,” Orona said.

After a decade, she and her domestic partner split, and she landed first on her friends’ couches, then the street. Just before she and Weiss joined forces, she was living in a tent encampment in the northern Mission District.

Orona volunteers about five times a week for the overnight shift at A Woman’s Place drop-in center, in the Mission District. Before she had four walls, her bike rides home were filled with apprehension. Had the police showed up at her tent? Had the Department of Public Works confiscated her belongings during a cleaning sweep? Maybe a thief ripped her off?

“I don’t have those fears now,” Orona said. “I can lock my door and lock the gate, which is a good feeling.”

This story was updated with additional information on 11/2/17