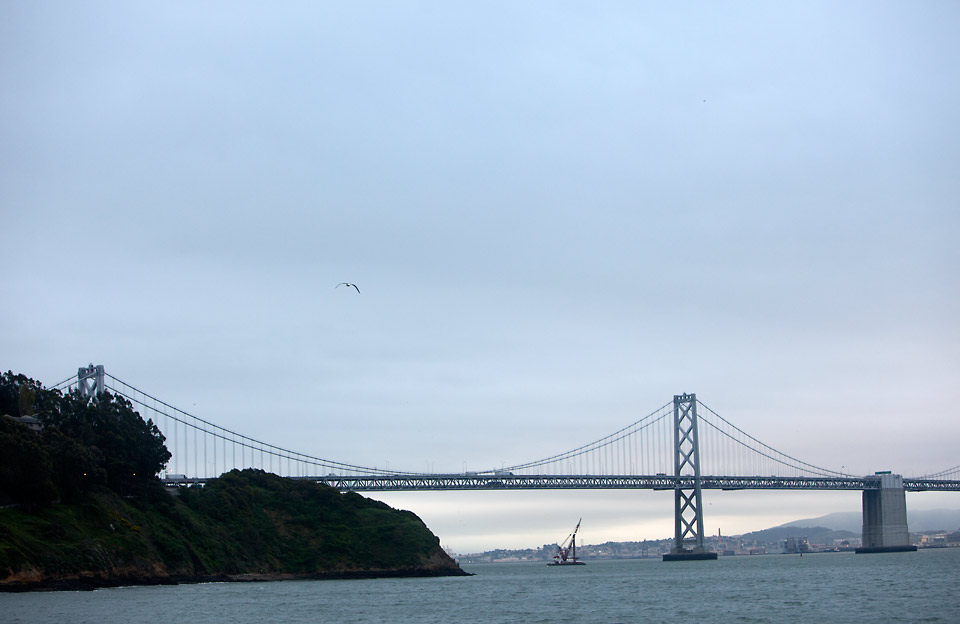 Traffic congestion on the Bay Bridge to and from Treasure Island is expected to increase as the island is developed. Photo by Monica Jensen/SF Public Press.

Residents, environmental organizations and local agencies voiced those concerns this fall in almost 700 written comments on proposed new residential and commercial development that planners have said would make the island a world-class green neighborhood.

Comments about the project’s draft environmental impact report submitted by the September deadline expressed deep misgivings with the plan by the city and the developer to limit driving on and off the island.

“We are concerned that the project will be allowed to proceed and create profits on the island while causing delays to Muni and AC Transit, while both services are suffering with operating costs exceeding their available funding,” wrote Howard Strassner, a transportation committee member with the Sierra Club San Francisco.

Suggestions from commenters on how to remedy the problem include reducing the number of cars residents own by cutting parking spaces, and charging visitors for parking.

Many comments argued that not only traffic, but also more vehicles, increase greenhouse gas emissions and other air pollutants. Forty percent of the Bay Area’s greenhouse gases reportedly come from vehicles. Other comments forcefully point out that if the project aims to be a cutting-edge green neighborhood, it must reduce the use of cars.

A one-to-one residential to parking ratio “is no longer considered anywhere near the cutting edge of sustainability or carbon neutrality,” wrote Ruth Gravanis, a member of San Francisco’s Commission on the Environment, commenting on her own behalf.

The uproar over congestion is no surprise, given that the draft environmental report concluded that the tangible effects of traffic would be “significant and unavoidable” even after mitigation steps suggested in the report.

It found that a “significant impact on queuing” would occur during rush hour on San Francisco streets leading to the Bay Bridge and at the bridge’s toll plaza, and would slow Muni and AC Transit buses.

Development planners propose 8,000 residential units to accommodate 20,000 people. Judging from the proposal, which allows each unit one car, the commission found the project would lead to an additional:

The Bay Bridge can accommodate 9,000 vehicles per hour in each direction. Its capacity is exceeded at rush hour, evidenced by daily traffic jams.

The Planning Department’s assessment takes into account the city’s and developer’s mitigation ideas, including adding a ferry from Treasure Island to San Francisco, running additional buses, requiring residents to purchase public-transit passes, charging residents a $5 toll for entering or exiting the island and building a high-density neighborhood to reduce the need for residents to leave the island frequently.

Money from commercial and on-street parking fees would fund improvements to public transportation, increasing ferry and bus service. The developer, Treasure Island Community Development, opposes reducing parking spaces, thus the number of cars the island can sustain, arguing it would limit public transportation revenues and diminish the marketability of the units.

But the Bay Area environmental nonprofit Arc Ecology countered the developer’s concern by showing that the average San Francisco household owns 0.65 car, and the organization proposed allotting each residence 0.75 parking space. The Sierra Club said that the ratio of one parking space for every two residences south of Market has been successful.

In objecting to the redevelopment, Gravanis wrote, “Please also address the illogical circuitousness of the argument that says that the only way to achieve the project objective of ‘discouraging automobile use and promoting the use of public transportation’ is to encourage more driving and parking as the way to generate enough revenue to make it possible for people to take transit.”

Other points of contention included the project’s effect on migrating birds and surrounding waters; air pollution caused by the construction and added vehicles, given that the Bay Area already fails to meet state and federal ozone and air particulate matter standards; and the impact of noise and air pollution on residents and staff using Federal Job Corps facilities on the island.

The Planning Department and other city agencies are just beginning to sort through the responses, many of which are “fairly sophisticated comments in terms of their technical nature” said Michael Tymoff, city’s project manager for Treasure Island.

The city originally hoped the project would break ground in summer 2011. Tymoff wavered in his response about the latest timeline. “It’s still likely to happen in the summer, the fall or the end of 2011,” Tymoff said. He said the large volume of comments would not likely slow the project’s progress — though other matters, such as the transfer of the land to the city from the Navy, might.