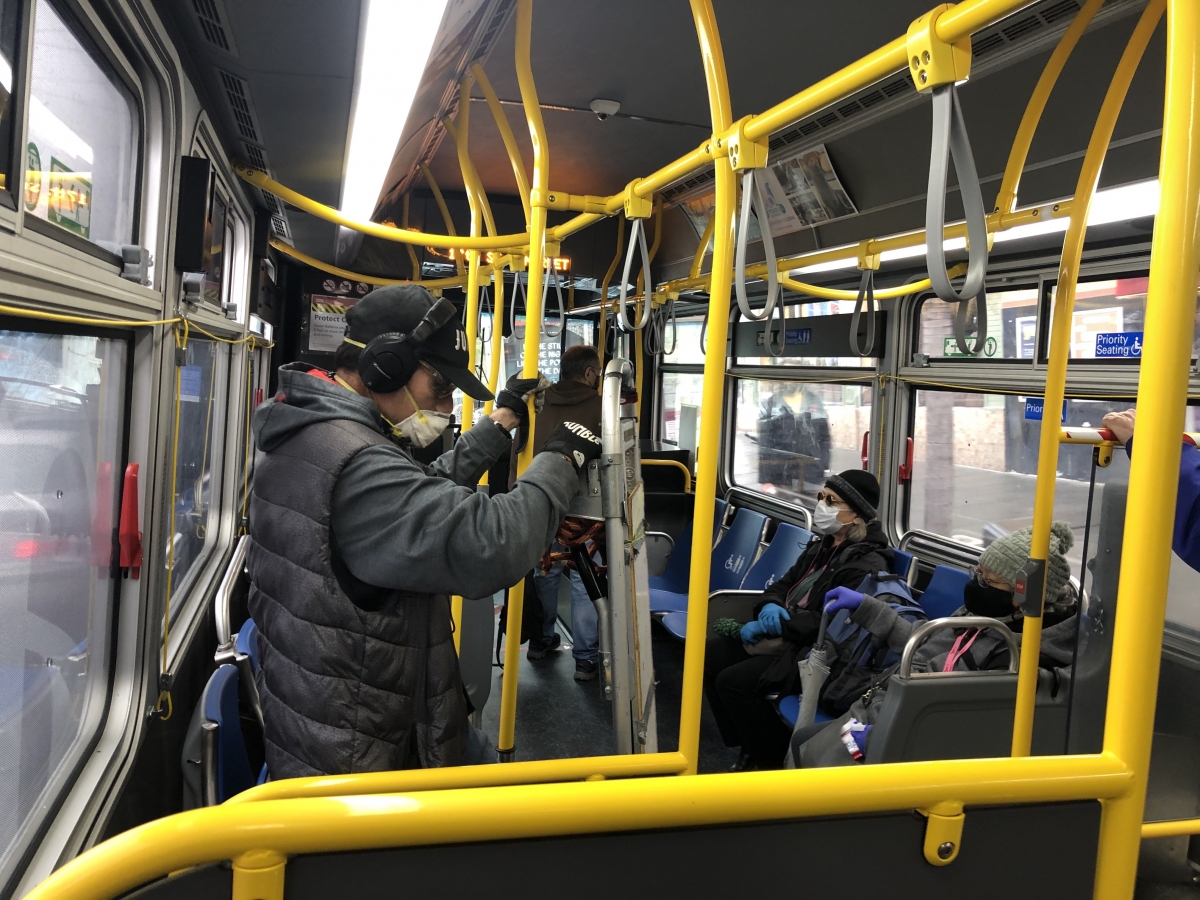 Passengers on the 24 Divisadero bus in San Francisco on April 6 protect themselves with masks. The 24 was among the bus routes considered part of the core service and it wasn’t cut.

| By Steve Rhodes, Photographer |
LikeTweet EmailPrint More
We set out to document how people’s experience using public transportation in San Francisco would change after Muni suspended service on all but 17 of 79 lines.

Because most residents were sheltering in place, ridership plummeted well before Muni reduced service on April 8. According to the San Francisco Examiner, Muni ridership was already down 83 percent on some days during the pandemic.

I took these photos on April 6 and 7, the last days many buses ran, on April 8, the first day Muni ran only “core service” bus routes, and again on April 10.

Muni workers volunteered to post more than 2,000 signs overnight on April 7, so that riders would know which lines were not running and which ones were still in service. But the next day, some riders were still confused about the changes even though there were signs and maps posted at most bus stops.

After a week observing this transportation transition, one thing that stuck with me was a comment from a bus driver on one of the routes being cut: “I don’t want to be like Jason in Detroit. Man, that video. I don’t want to be like him.” The driver was referring to Jason Hargrove, a Detroit bus driver who posted a video about passengers coughing on him on March 21. Hargrove contracted COVID-19 and died on April 1.

I was familiar with that story. I had also seen reports of New York City transit workers getting sick and dying.

In working in the field as a photojournalist, I was mindful of drivers’ fear of infection and the risk to passengers if buses were crowded. I rode some less crowded buses on April 6 and 7, including one where I was the only passenger. I decided to just walk on April 8, the first day of reduced service. While some buses didn’t have many passengers that day, I did see a few that were fairly full. Passengers on the 24 Divisadero bus in San Francisco on April 6 protect themselves with masks. The 24 was among the bus routes considered part of the core service and it wasn’t cut. A woman waits on a rainy day for the 7 Haight/Noriega on Haight Street at Divisadero Street on April 6. It was the last day the 7 was running. It was among a smaller group of buses that stopped service on April 7 before wider Muni cuts took effect on April 8. Two 6 Haight/Parnassus buses cross paths behind a 7 Haight/Noriega bus on Haight Street at Divisadero Street on April 6. Both routes were cut. The front of a 6 Haight/Parnassus bus going down Haight Street is blocked with straps to make sure riders keep their distance from the driver on April 7. The 6 was among the Muni routes cut the following day. The front seats on the driver’s side of a Muni bus are strapped in upright position to keep riders farther from the driver on April 7. Two people wait for another bus after not boarding an N Judah bus on Haight Street at Divisadero Street on April 7. Service for the 7 Haight/Noriega, which normally stopped there, was cut on April 7, and for the 6 Haight/Parnassus on April 8. An N Judah bus with a CDC coronavirus public service announcement on the side turns off Haight Street on April 7. The 6 and 7 buses, which typically ran on Haight Street, were cut because of the coronavirus pandemic. A sign explaining which bus routes had been cut and a map of remaining routes is posted at a bus stop that no longer has service from two routes on April 8. Muni workers volunteered to put up 2,000 signs at Muni stops throughout the city the night before. A Rider Alert sign listing dozens of cut bus routes along with a map showing the remaining core service routes was displayed at a temporarily decommissioned bus stop on April 8. A Rider Alert sign shows which bus routes have been cut at an out-of-service bus stop on 24th Street on April 8. A woman shows signs about cancelled bus routes to another woman who had been sitting at a bus stop at 24th and Folsom streets waiting for the 48 Quintara/24th St. bus on April 8. The only place the 48 Quintara/24th St. bus was still “running” on April 8 was in “Mission Makeover,” a mural completed in 2012 by Lucia Ippolito and Tirso Araiza on Balmy Alley. A sign in the window of a 14 Mission bus, one of the few Muni routes still running on April 8, asks riders to board through the rear door to keep social distance from the driver. A 14 Mission bus displays an ad for the Levi Strauss exhibit at the now-closed Contemporary Jewish Museum. The 14 was one of the few routes still running in San Francisco on April 10, after drastic service cuts on April 8. Workers started boarding up an entrance to the Van Ness Muni stop on April 10. Muni headquarters is within view across Market Street. In response to the pandemic, Muni stopped running all underground trains and replaced them with buses. An entrance to the Van Ness Muni stop is being boarded up on April 10 following Muni’s decision to stop running underground trains and replace them with buses. Two hearts made of locks and ribbons on a fence are a regularly updated renegade art installation in front of the 6,000-square-foot “Bird Song #3,” the first mural designed by artist Joshua Coffy and painted by 30 volunteers in 2015. Another entrance to the Van Ness Muni stop has already been boarded up on April 10. The underground Muni trains, along with cable cars and streetcars, had stopped running and were replaced by buses. People wait at a stop on Market Street and Van Ness Avenue on April 10. A bus replacing the regular N Judah line and another bus going in the same direction are at another stop across the intersection. A 9 San Bruno bus is about to turn on to Market Street on April 10. Across the street, people wait at a bus stop, which displays several rotating digital CDC coronavirus public service announcements. People wait at a stop on Market Street as an N Judah bus approaches on April 10. An ad supporting Meals on Wheels is displayed on an out-of-service bus on April 10. People boarding a 14 Mission bus at Mission and 30th streets are wearing masks, but don’t seem to be following distance protocol on April 10.

I've been a member of the Paper Tiger TV video collective, worked on documentaries for Frontline at the Center for Investigative Reporting, was online editor at the Bay Guardian. My stories or photographs covering media, culture, and politics have been published in books, magazines, newspapers, and websites including the Wired, Salon, San Francisco Magazine, the Christian Science Monitor, Extra!, MediaFile, Bay Guardian, SF Weekly, TheAtlantic.com, Laughing Squid, Newsweek.com, and the BBC's website. You can also follow me on twitter http://twitter.com/tigerbeat