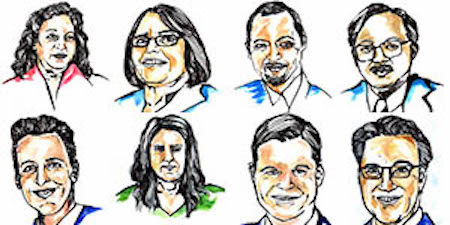 Civic leaders disagree on why homelessness hasn’t been solved. Illustration by Anna Vignet.

San Francisco has struggled for more than 10 years to solve the problem of chronicl homelessness. While the current consensus endorses the principle of “housing first” — stabilizing people by getting them off the streets and into basic housing — there is little agreement about the optimal policies to pursue. We asked eight civic leaders for their ideas about how to improve the living situations of the thousands of people currently living on the streets and in shelters. “This is one of the big issues that got me into politics. I was really fed up because people were dying on the streets, emergency rooms were overwhelmed every night. It was the issue for decades of mayors, but it’s not anymore. There’s been zero accountability.” “We’ve seen reductions in hospitalizations with individuals who have been placed in units. We accomplished that because our health department has a housing component — we’re one of the first.” “We know chronic homelessness has not been abolished, and we know more needs to be done, but we will continue to make up the necessary investments in the people of San Francisco for everyone that calls our city home and keep San Francisco families in their homes.”

Attorney, former president of the Board of Supervisors “We don’t prevent homelessness, we create it. The key to ending homeless is funding mental health care — it’s so obvious. We need to be putting more money into permanent supportive housing.” “We always agreed with the housing first policy. But the idea to prioritize one population based on length of homelessness never seemed like a good idea to us. It creates barriers for people. As people are homeless for longer periods of time, the trauma of living on the streets causes other health complications — whether it’s mental health or physical health or addictive disorders.” “I find in my experience that people are willing to accept housing, but it has to work for them. Right now, it’s not working for so many. If someone has to leave their partner or their dog or grocery cart of belongings for housing, that’s not working.” “More and more people are now coming into the jail system, and it has been that way for years. We are really in effect the largest mental health hospital in the city and county of San Francisco. If you ask people on the street if they knew that or not, I bet they’d be a little surprised.” “We have a moral imperative to do all in our power to continue to end homelessness. Our city has made tremendous progress, but we know there are still far too many living on our streets and shelters with no place to call home.”