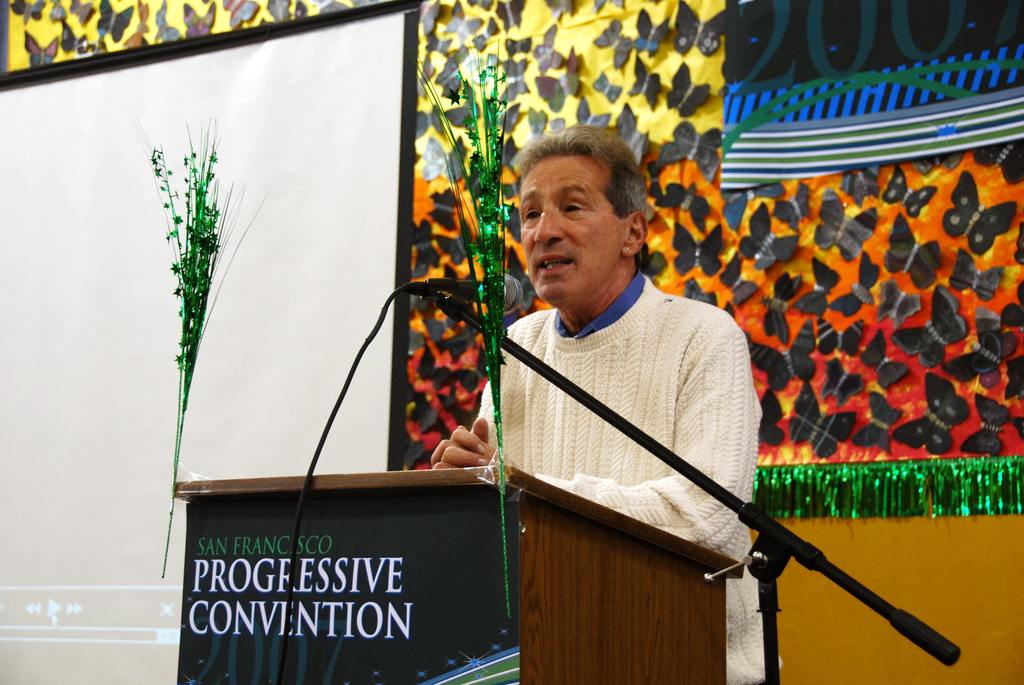 Tom Ammiano, D-San Francisco, said he will continue to negotiate on rights for homeless people during the delay on his bill. Photo by Steve Rhodes/San Francisco Public Press

A “homeless bill of rights” in California must wait until next year for a vote in the full Assembly after clearing its first hurdle.

Advocates say the legislation would protect homeless people from local enforcement of so-called “quality of life” laws, and specify homeless people as deserving of protection in the state’s antidiscrimination statutes.

Earlier this month, the Assembly’s Judiciary Committee approved the legislation, AB 5. But last Friday, the Appropriations Committee put the bill on hold until January 2014.

Assemblyman Tom Ammiano, D-San Francisco, said in a statement that his bill was suspended largely because of the costs of setting up new infrastructure and enforcing the new rules. But he vowed to negotiate with advocates and opponents through the rest of this year to protect the legal rights of homeless people.

The Appropriations Committee said the bill would cost around $300 million, mostly for state public health officials to build and operate hygiene centers with showers and bathrooms.

The bill would bar discriminating against homeless people while they seek or maintain tax-funded benefits. It would also assert a right to be in public places, safeguard personal property, guarantee use of public facilities, protect confidentiality of medical records and provide legal representation in low-level criminal proceedings, not just those that rise to the level of misdemeanors.

The bill’s main purpose is to challenge local ordinances that deem sitting on sidewalks or loitering to be infractions, which homeless advocates say are disproportionately enforced on low-income people.

Since Ammiano introduced it last December, the bill has been amended to delay enforcement of local laws unless yearlong welfare benefits are provided, and benchmarks for unemployment rates and waitlists for public housing are met.

Savings provided by supportive services, including housing and medical care, would offset the enforcement costs, Ammiano said. According to estimates from the law school at University of California, Berkeley, the state spends between $310 million and $1.7 billion on issuing citations, trying and incarcerating homeless people who are unable to pay tickets.

A pilot study in Los Angeles also found California spends $605 per person monthly in supportive housing, while it spends $2,897 on services to those who remain without housing.

But these economic arguments are not swaying opponents of the measure. Assemblyman Donald Wagner, R-Irvine, said that if the bill were enacted, cities would shoulder the costs without reimbursement from the counties. He also said he fears municipalities would be vulnerable to legal challenges from those receiving citations.

“Plaintiffs’ class action lawyers will have marvelous new opportunities to sue public agencies and pocket millions of taxpayer dollars for themselves,” Wagner said. “Not a dollar necessarily will go to providing new homes for the homeless.”

“Our local laws against forming encampments, passing out and blocking sidewalks, and otherwise monopolizing public spaces would be wiped off the books,” he said. “Think we have a street behavior problem now? Just wait until this passes.”

Business alliances have also come out against the bill. Opponents include the San Francisco Travel Association, the Golden Gate Restaurant Association and the state and city Chamber of Commerce groups. In addition, 60 cities, including San Jose, have declared their opposition.

California would be the third state to have a homeless bill of rights if it passes, after Rhode Island and Illinois.

The final deadline for passage in the Legislature is in September 2014.

Advocates for the homeless said they would lobby to pass the legislation. “By January, we will be strong enough to not have to ask for their support — we can demand it,” said Paul Boden, executive director of the San Francisco-based Western Regional Advocacy Project.