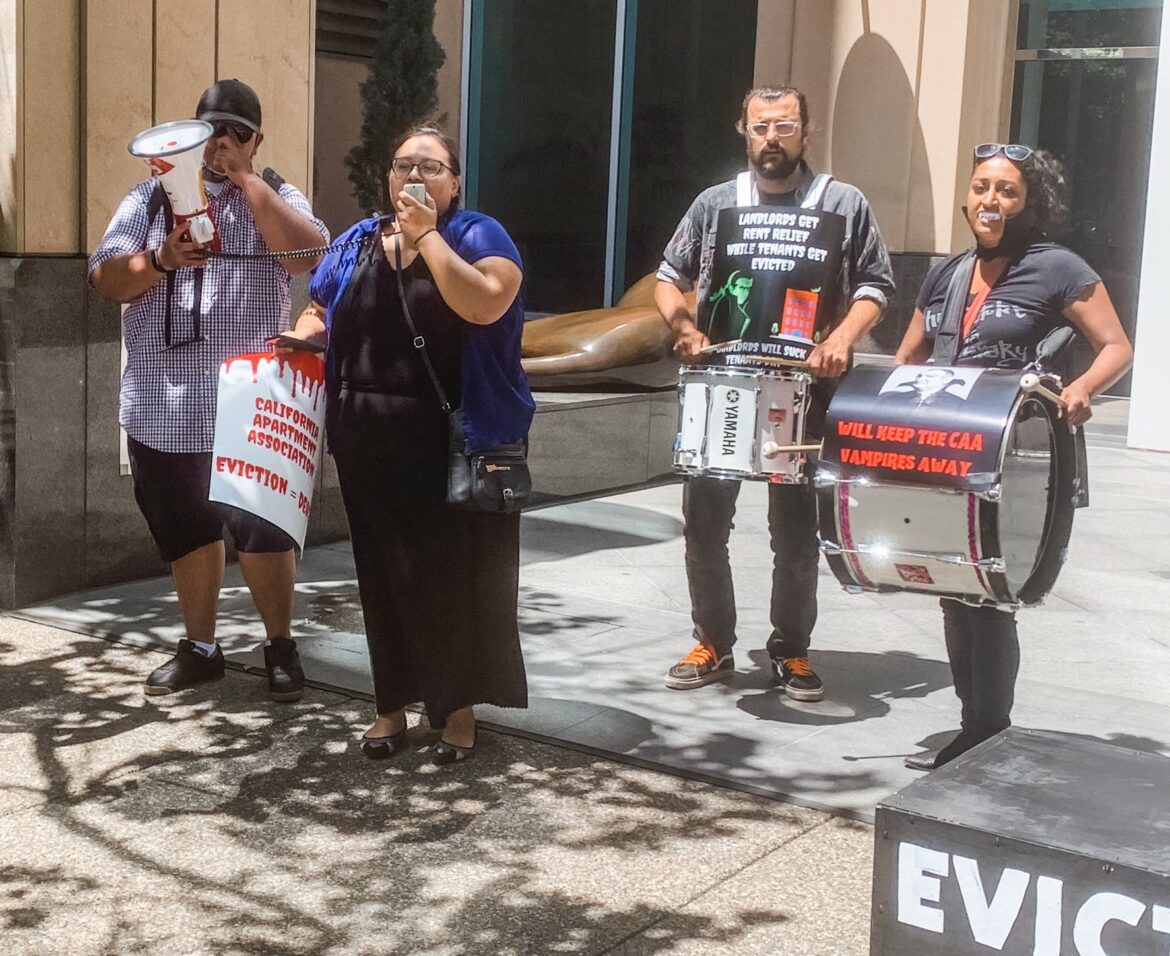 Tenants and advocates protest in Sacramento against recent statements by the California Apartment Association, which has argued against an extension to the statewide eviction moratorium.

Gov. Gavin Newsom and leaders in the California Legislature Friday unveiled a long-awaited plan to continue to protect tenants from eviction based on unpaid rents that were due in the last year. Tenant attorneys and advocates are still studying the details of the proposal, crafted behind closed doors, but are already spotting elements they find troublesome.

One key element of the proposal, Assembly Bill 832, renders local governments unable to establish any new eviction protections until April 2022. It also invalidates any local ordinances passed retroactively to August 19, 2020. That would undo legislation recently passed by the San Francisco Board of Supervisors, which prevents eviction for nonpayment of rents that would otherwise be due in a period starting July 1 and extending through the end of this year — three months longer than the state’s protections.

If passed, AB 832 would extend the statewide eviction moratorium through the end of September 2021. That means that by Oct. 1, 2021, San Francisco tenants would need to have paid at least 25% of the rent that was due since Oct. 1, 2020. Otherwise, landlords could evict them. If the bill also nullifies local protections, San Francisco tenants could be evicted in October for rents due that month.

“I am not convinced that our economy will be strong enough by Oct. 1,” said Ora Prochovnick, director of litigation and policy at the Eviction Defense Collaborative, adding that she viewed city supervisors’ recent vote as a sign they share that concern. “They think people will need help through December, and the state just said that’s too bad.”

Rent debt in San Francisco has grown throughout the pandemic, according to a report published this week by the city’s Budget and Legislative Analyst’s Office. The estimated maximum debt is $355 million, up from about $196 million in September.

The Public Press reached out to the City Attorney’s Office for its analysis of how AB 832 would affect local eviction laws but did not hear back by the time of publication.

The proposed state legislation would extend the clock for low-income tenants who experienced a COVID-19 hardship, protecting them from eviction through the end of March 2022.

That would give state and local rent-relief programs, which began operating mid-March and have struggled to get checks out the door, more time to help tenants. As of Tuesday, about 5,300 San Francisco households had requested $66 million in rent assistance but only 75 had received checks.

The new state legislation would reimburse landlords for 100% of the rents owed by tenants seeking help. As of now, the maximum that landlords can receive is 80%.

AB 832 requires a two-thirds vote to pass, and Newsom said that he was eager to sign it once it reaches his desk.