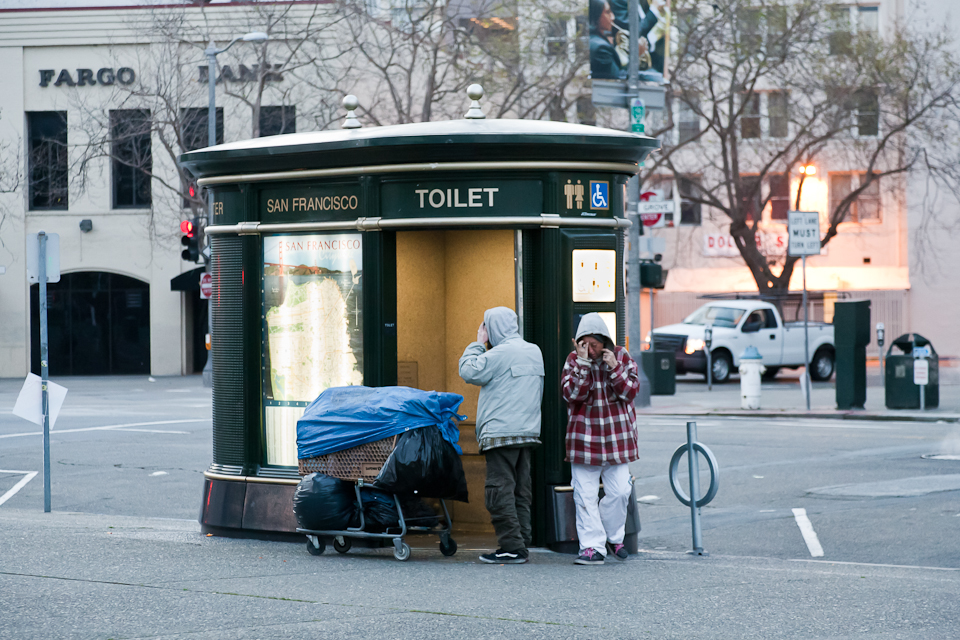 The public restroom near City Hall gets plenty of use. During business hours the units are havens of drugs and prostitution, and often filthy. Photo by Jason Winshell/SF Public Press.

Nina Frazier, Beat Reporter |
LikeTweet EmailPrint More
Prostitution and drug use aren’t what San Francisco bargained for 14 years ago when it allowed a private company to install public restrooms across the city. But among the 25 freestanding units, several have been routinely closed for a week or more because they were regularly hijacked by junkies and sex workers.
Even when used by legitimate patrons, the toilets have been hard to keep up to modern sanitary standards. Most of the so-called “self-cleaning” toilets are now so filthy that even after automatic cleanings, they require one to five manual scrub-downs each day.
How messy are we talking about? One indication: Homeless people in the Tenderloin say they are so repulsed by the conditions inside that they avoid using the bathrooms, preferring to relieve themselves on adjacent sidewalks, alleyways and bushes.
“They’re disgusting!” volunteered Jim Rokas, a homeless carpenter who sells the Street Sheet newspaper, as he pointed angrily at the gold lettering above the forest green bathroom pod at City Hall that reads “TOILET.”
“We call these ‘hoe-tels,’” he said.“H-O-E-T-E-L. People use these for sex, shooting up, everything!”
Drugs are commonplace in the units, as they serve as convenient, private spaces that cannot be unlocked from the outside — ideal for getting a quick fix. In more than a dozen visits to four public restrooms over the last month, a Public Press reporter found two where hypodermic needles were strewn across the floor.
There are also clear signs of prostitution at a bathroom just beyond the balcony of Mayor Ed Lee’s office — even during business hours. At the self-cleaning facility in Civic Center Plaza, just steps from City Hall, the automatic door stayed open just long enough for one man to come out and another to go in, while a woman who remained inside entertained each for up to half an hour. (Rules posted on the bathroom limit occupancy to one adult at a time, with a 20-minute maximum.)
The toilets were installed in San Francisco by the New York-based advertising company JCDecaux, starting in 1996. Maintaining hundreds of public restrooms in Paris and London, the company spent $250,000 on installation for each facility here. JCDecaux recoups the investment by selling ad space on the outsides of the bathrooms, as well as on more than 100 kiosks throughout the city. The city receives a cut of the profits — $507,000 just in the last year, according to Department of Public Works Spokeswoman Gloria Chan.
“It’s a money-generating program for the city, and a service provided at low cost,” said Francois Nion, JCDecaux’s executive vice president.
But the network of city toilets isn’t as clean as city officials had first promised. What was intended to be a service for poor residents without access to basic hygiene, as well as a relief for tourists, has become a health hazard for undaunted patrons and the staff who clean and maintain them.

The facilities are designed to clean themselves during a 55-second automatic cycle in which a cleaning solution is sprayed on all inside surfaces. But the bathrooms weren’t designed for the job of cleaning up after drug users who leave needles and the other paraphernalia behind, or those who disable the doors by wedging them shut from the inside. The loads of garbage and human waste that end up everywhere often remain, soaked with detergent, until a human janitor bags them.
Public Works spokeswoman Chan insisted that the city was not responsible for the maintenance, cleanliness or safety of the facilities. Rather, it is written into the city’s 20-year contract with JCDecaux that the company must keep the facilities in a “clean, graffiti-free, safe, and first-class condition” by providing “the necessary personnel to assure the maintenance of Automatic Public Toilets.”
As a result the facilities, which frequently go in and out of service because of mechanical trouble, trash or police activity, are shuttered by the city. For residents of low-income, high-density neighborhoods such as the Tenderloin, that means the closure of the only bathrooms available to the public at night.

Police say they can’t pay special attention to the sex and drug activities that occur in the restrooms because “there is no way to track crimes specifically at the public restroom locations,” said police spokesman Albie Esparza. Instead, they respond to crimes in progress and complaints from residents.
“The Police Department is aware that these public toilets are sometimes used by persons engaged in unlawful activities,” Esparza said. “Police officers do respond to calls, reports of crimes or suspicious persons at public toilets and take the action on any suspicious activities they may observe.”
Community activists say the filth is equally distressing. Dina Hilliard, interim director of the North of Market/Tenderloin Community Benefit District, which advocates for better public services in the neighborhood, said that in their current condition, the city’s public bathrooms are not a safe option.
“Those of us who know them don’t want to use a bathroom like that,” Hilliard said. “You don’t know who is going to be inside or who is going to greet you when they come out.”
Despite the misuse Hilliard said closing or even getting rid of the facilities would exacerbate problems: “I don’t want to see amenities removed because they aren’t being used properly.”

On a recent weekday, JCDecaux maintenance technician Peter Vongseni pulled his van onto the sidewalk beside the public toilet outside City Hall. Seeing the green door closed, he waited inside his van for five minutes, then walked up and gave a knock. After several minutes a bearded man in baggy black jeans and a helmet emerged, wheeling out his bike, as a middle-aged woman dressed in sneakers, dirty jeans and a faded windbreaker followed. Then they moved in opposite directions.
After working for JCDecaux for two years, Vongseni said he is practiced in this routine.
“Every time I come, there are people inside,” he said. “Today when I came there were some Chinese tourists trying to get in the bathroom, and there were three in there yelling at them to stop pushing the button.”
When Vongseni arrives each morning at the City Hall bathroom, he usually encounters broken toilet parts that need fixing, five or six drug needles and often an inexplicable amount of excrement spread everywhere.
“Every day it’s a huge mess,” he said. “There’s poop on the floor, poop on the wall.” He said the maintenance crews “get together after work and complain. We don’t know how they do it.”
Vongseni warns tourists and children not to go in the bathroom until he has been in to clean it. In fact, the sordid conditions have led JCDecaux to give maintenance workers special training on the health effects of AIDS, hepatitis B and C, and the risks of working in unsanitary conditions.

No relief in central city

The toilet at City Hall is among the most heavily used, with maintenance records clocking in just over 500 uses in two days over a recent weekend. But Vongseni said the other two public restrooms in the Tenderloin, located at McCauley and Boeddeker parks, are equally unclean.
Wedged between a small fenced-in children’s playground and the New Century strip club on Larkin and O’Farrell streets, the McCauley Park facility is frequently trashed. At 11 a.m. on a recent weekday, a pair of pink-striped children’s underwear was found stuffed beneath feces in the metal toilet bowl. The restroom receives about 70 flushes a day, and despite being serviced four to five times daily, it is constantly abused.
Because of the number of complaints of illicit activities after hours, the city ordered JCDecaux to close the McCauley Park restroom between 7 p.m. and 7 a.m.
“It helped a little bit, but I think it’s an out-of-sight, out-of-mind mentality,” said Adam Solarzano, director of operations for JCDecaux. “The cops could help us, but they don’t.”
The other bathroom, at Boeddeker Park at the corner of Eddy and Jones streets, just opposite the Tenderloin Police Station, stayed closed for three weeks over February and March due to construction. It then reopened — only to see a return to its state of misuse.
Other public toilets, like the one at Castro and Market streets, are also messy affairs. But with a more police patrols nearby, the mess is kept to a minimum. Esparza said that while the police are aware of crimes committed inside the facilities, the bottom line is that “there is no special policy for policing Tenderloin public restrooms” and no plan to increase patrols.

JCDecaux said the city approached the company recently with several ideas to keep drug and sex activities out of the units.
The city’s food-service providers have recently begun talks to extend bathroom hours at soup kitchens, at the city’s expense.
Another proposal involves installing blue lights inside the bathrooms. That would deter drug users from locating veins, a prevention technique popular in Europe. Another is to close the restrooms at Boeddeker and McCauley parks at night, even though they are the only after-hours facilities in the neighborhood.
But Tenderloin advocate Hilliard said that eliminating those facilities would be counterproductive.
“You cannot just service the 9-to-5 part of a person,” she said. “It’s a public-health issue for the neighborhood. You can’t claim to be servicing people who are homeless and not provide this amenity for them.”

This is the second of two articles about hygiene options for San Francisco’s homeless. See Nina Frazier’s story from last week: Are food service providers really to blame for human waste in the Tenderloin’s streets?

Nina Frazier is a journalist who writes, reports and lives in the Tenderloin area. She covers issues in the Tenderloin on Loin Life (www.loinlife.wordpress.com) a blog dedicated to the neighborhood she started for a journalism class at San Francisco State University. Previously, she has reported for the San Mateo County Times and Salon.com. She has experience in photography, video, audio and multimedia production. Follow her on Twitter <a href="http://www.twitter.com/ninafrazier">@NinaFrazier<a/>.