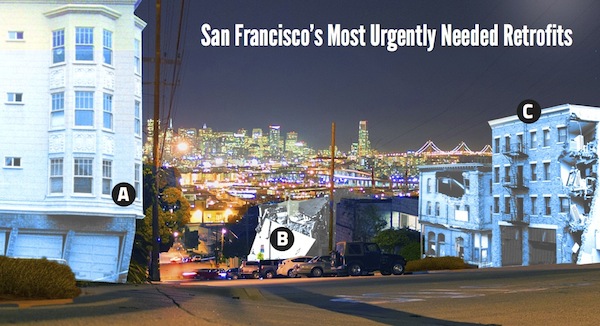 There are three types of construction in San Francisco that pose hazards to occupants during a major earthquake. Here is a composite look at the present state of efforts to correct the problem around the city.

San Francisco has identified 2,929 buildings whose “soft” first stories appear to be — at least from a drive-by assessment from the outside — vulnerable to collapse during a quake. Built before 1973, these buildings are all over the city and usually have a store with large windows or a garage in the first floor. They house about 58,000 residents. The City Administrator’s Office is developing legislation for early 2013 to require building owners to retrofit them.
That might involve anchoring the building’s wood frame to the foundation, reinforcing the first floor with a supplemental steel frame, modifying the foundation, or even installing a lighter roof. The city estimates that it will cost $260 million to retrofit all of San Francisco’s soft-story buildings. Major sticking point: Who’s going to pay for it? Meanwhile, tenants haven’t been told their buildings might be dangerous.
Photo: National Information Service for Earthquake Engineering

B: UNRESOLVED: Non-ductile concrete buildings
These structures, built before 1980, cannot adequately flex during a quake, so they tend to break apart instead. While professionals estimate that San Francisco has up to 3,000 of these, no one knows for sure. That is because they are impossible to visually identify, and require an engineer’s on-site inspection. They need to determine whether the concrete supports have enough steel inside, but it’s often tricky to ascertain through study of the blueprints.
David Bonowitz, a structural engineer who has helped document these buildings in the city, said they vary widely in appearance and use, “but they almost certainly include schools.” Retrofits, which could include installing steel support frames, could cost millions of dollars per building. “We just don’t know,” Bonowitz said. The city expects to finish the decade-plus process to retrofit residential non-ductile concrete buildings by the early 2030s. Seismologists have said there is a 63 percent chance a major quake will occur between now and 2038.
Photo: Pacific Earthquake Engineering Research Center

C: NEARLY COMPLETED: Unreinforced masonry buildings
In the 1990s, the city identified 1,987 brick buildings that originally lacked wood or steel frames, making them vulnerable to shaking, and mandated they be retrofitted. Ironically, brick was the material of choice following the 1906 earthquake because they were so fire resistant. But in a strong quake, bricks can break away and injure people below. And the building itself can crumble if unreinforced by steel beams or diagonal braces.
A 1992 ordinance mandating retrofits fixed all but 158 of these buildings. Voters approved a $350 million bond to help building owners cover costs, but to date only about $70 million has been used because private loans offered lower interest rates. Department of Building Inspection spokesman William Strawn said the department is working with the City Attorney’s Office to retrofit the stragglers, which are city-owned and uninhabited.
Photo: National Oceanographic and Atmospheric Administration/NGDC