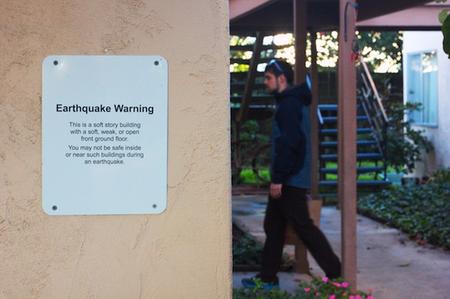 San Francisco would not be the first city in the Bay area to post warning signs on buildings suspected of being earthquake hazards. Since 2005, Berkeley has required owners of buildings on a soft-story list to do seismic inspections. Until they are retrofitted, the buildings must display a standard sign. A proposal before the San Francisco Board of Supervisors would require the signs only after owners fail to comply. Photo by Noah Arroyo/Public Press

A plan being unveiled Tuesday in San Francisco would require the city to inform the owners of thousands of potentially earthquake-unsafe buildings that they need to retrofit at their own cost or demonstrate why not.

If they don’t comply, the city would post a scarlet-letter sign on the property: “This building is in violation of the requirements of the San Francisco Building Code regarding earthquake safety.”

That is among the details emerging from a plan going before the Board of Supervisors, which has been in the works for several months and is now backed by Mayor Ed Lee.

The San Francisco Public Press asked for a draft of the legislation in November, but only obtained a copy Monday night. The report was the cover story in the newspaper’s Winter 2012-2013 print edition: sfpublicpress.org/earthquakes. The Public Press also published a preliminary list of 2,929 soft-story buildings the city suspects could be an earthquake risk. See sfpublicpress.org/softstorylist to find addresses listed by ZIP code.

What was already known before Monday was that the seismic upgrades would be phased in between 2017 and 2020, depending on the potential for damage, assuming the law is passed this year. Construction could start as soon as 2015.

But the draft ordinance also spells out new procedures:

The proposal was the focus of a half-hour program on earthquake retrofits on KQED-FM’s “Forum” talk show Tuesday morning. Some landlords said they had been confused about the status of the law, and didn’t know how much the retrofit work would cost them. Others said they were concerned about the cost, and wondered whether landlords could pass on the cost of retrofits to renters.

“I’m worried that maybe they might raise the rent more than they already do,” said one caller named Brian, “to offset the cost of the retrofit.”

Charley Goss, government affairs officer with the San Francisco Apartment Association, was a member of the advisory group that helped draft the ordinance. He responded: “To be honest, I’d say that’s definitely a possibility.” But Goss said rent increases would be amortized over 20 years.

Even building owners who did not receive notices must still retrofit by their respective deadlines. But owners who “have no knowledge that the building is within the scope of this Chapter” will only have to start worrying about retrofitting when they find out.

Owners who fail to satisfy the new law by their deadlines would face abatement procedures. Until they retrofit, they would have to tolerate a city notice on their property telling residents that the building was in violation of the building code.

Other cities, including Berkeley, already require similar notices. But Berkeley puts up the notices right away, as soon as it suspects there is a risk, and does not wait for owners to fail to comply with the law.

San Francisco could have had a mandatory retrofit program for soft-story buildings already, had voters passed a 2010 ballot measure that would have provided funding to owners to help them with retrofit costs. The proposition came just short of the two-thirds majority needed to pass.

For more details on the proposal, listen to a half-hour program on earthquake retrofits on KQED-FM’s “Forum” talk show that aired Tuesday morning.