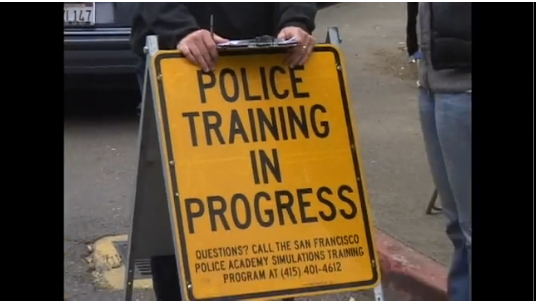 The city will need to do a lot more training of police officers as hundreds take retirement. Photo courtesy of San Francisco Police Department.

The San Francisco Police Department appeared to save money over the last three years by paying veteran officers extra to delay their retirement and freezing hiring of new recruits.

But the bill for those changes is now coming due.

Much of those savings have been wiped out since 2008, after a flood of officers took advantage of the Deferred Retirement Option Program to dip into their pensions early while still earning a salary. An April 2011 report by the city controller’s office projected potential net costs as high as $47 million, the equivalent of up to nine Police Academy classes or about 460 cadets.

Now, with the proposed reopening of the Police Academy for classes of new cadets and a plan to hire 900 new officers over six years at a cost of $90 million to $108 million, the budget is shooting up again.

Mayor Ed Lee has proposed boosting the police budget for the fiscal year beginning in July by $30.3 million — a 6.6 percent increase — due in part to the need to catch up with the deferred retirement program.

In a letter introducing his fiscal 2008-09 budget, then-Mayor Gavin Newsom wrote he was hopeful that after years of investment, the police department would reach minimum staffing requirements for the first time in the city’s history.

However, as of the end of May, the department had 1,751 officers, well below the 1,971 mandated by voters in 1994, when the city had the highest violent crime level in the state. Four hundred officers are expected to retire within the next three years, including eight station captains who left by the end of June.

“Everybody knows the projected attrition rate in the police department is going to be devastating,” said Kevin Cashman, deputy police chief of the operations bureau, at a Police Commission meeting on June 6.

In February 2008, voters overwhelmingly approved the deferred retirement plan through Proposition B.  The program allowed officers eligible for retirement — those over 50 years old who had served for at least 25 years — to continue working for up to three years, collecting their usual wages and storing up pension benefits in an account with a 4 percent return guaranteed. At the end of the period, the officer received the savings in a lump sum, in many cases totaling more than $200,000.

Designed to encourage veteran officers to stay in order to forestall the need to hire new recruits, the program’s main selling point was the claim that it was “cost-neutral.” Theoretically, avoiding the cost of training and health benefits for new officers would save the city money.

Yet an analysis by Cheiron Inc., a consultant for the city’s retirement system, predicted that if the program were to continue, the city would accrue $52 million in added retirement costs. A report by Controller Ben Rosenfield concluded that the cost of recruitment would have been far less than the cost of deferred retirements, largely because an influx of officers who retired early to gain the program’s benefits.

Rosenfield’s report found that before the retirement program, only 12 percent of 55-year-old officers with 25 years of service elected to retire. When the program started, that figure jumped to 33 percent.

Overall, 60 percent of the officers eligible for retirement over the program’s three-year existence chose to take advantage of the deferred retirement option — 340 cops out of 564. Rosenfeld’s report estimates that if all the officers who enrolled in the program were planning to retire anyway, the city would have saved $5 million at most. But since officers retired prematurely, the city ran up a bill totaling as much as $29.5 million, as of January 2011. The controller’s office was only required to produce this one-time report to determine the program’s “cost neutrality”: there has been no analysis of the program’s costs since. The most recent annual report by San Francisco Employee Retirement System assessed $17.6 million in costs for the program for fiscal year 2010-11 and $8.7 million for 2009-10.

The deferred retirement program ended a year ago, after the Board of Supervisors voted against renewal, 10-1. Now-suspended Sherriff Ross Mirkarimi cast the sole dissenting vote.

Gary Delaganes, president of the San Francisco Police Officers’ Association, said the program was a success, and faulted the supervisors for not extending it. He cited the loss of one-third of the force’s captains within the last two months and the 400 officers expected to retire in the coming years as evidence. “You don’t just replace those people without paying a big price,” Delagnes said.

Sgt. Daryl Fong, a spokesman for Police Department, said 265 of those officers took advantage of the deferred retirement program.

The retirement changes led to massive shortages on an already understaffed force, whose last Police Academy class graduated in October 2009.

“Our cops are spread thin,” Delagnes said, especially since newly developed areas of the city need policing. “We’ve taken on Treasure Island and the Mission Bay neighborhood, which continues to expand.”

Even with the budget increases proposed by the mayor, the police force will not meet the mandated 1,971 officers until June 2018, Fong said.

“We have brought the city’s violent crime rates to historic lows and implemented innovative crime prevention strategies to keep San Francisco the safest big city in our country,” Lee said in a statement on May 30. “We must plan for the police force of the future to ensure we maintain these results.”

The mayor’s long-term projections are not binding, since he and the Board of Supervisors cannot commit funding beyond a two-year budget.

Officer Angela Rodriguez has been placed at the forefront of the reactivated recruitment effort as part of a team of two full-time recruiters and another part-time officer, who focuses specifically on military applicants and transfers from other police departments.

“We are getting a lot of people calling from all over the United States willing to move to California,” Rodriguez said. A list published in December 2011 by the Department of Human Resources contains the names of nearly 2,400 applicants who passed a fitness test and written and oral exams to qualify.

Delaganes said that since San Francisco has not resorted to layoffs, young people in search of a job will see it as a stable field. Rodriguez speculated that the depressed labor market increased the number of applicants, but she added, “I hope we recruit people that don’t just want any job, but actually want this one.”

The department will likely draw from colleges with criminal justice programs as well as the military, since many veterans who have finished their tours of duty seek careers in law enforcement, Rodriguez said.

Each Police Academy class of 50 cadets costs between $5 million and $6 million. For new officers, instruction lasts seven months, followed by another three months of training in the field, Delagnes said. Thomas Mazzucco, president of the police commission, said that even with training, it takes three to five years until officers are fully experienced in street service.

An additional problem facing the mayor’s attempt to meet the voter-mandated police staffing levels is the low percentage of recruits who actually complete training. The last Police Academy class began with 42 recruits, 37 graduated, and 26 of those completed the field training program.

The mayor’s proposal would also hire 52 more civilians in administration, Chief Greg Suhr said at a Police Commission meeting in the Tenderloin on Wednesday.

Suhr said the impending retirement of some of the force’s most senior officers was a loss of “a couple hundred years of experience.” Yet Suhr said the department could handle that because it has been preparing for the overhaul for at least a year and a half.

“We have a good succession plan in place,” he said. “Folks retire.”

The mayor’s budget proposal needs the approval of the Board of Supervisors by July 31.