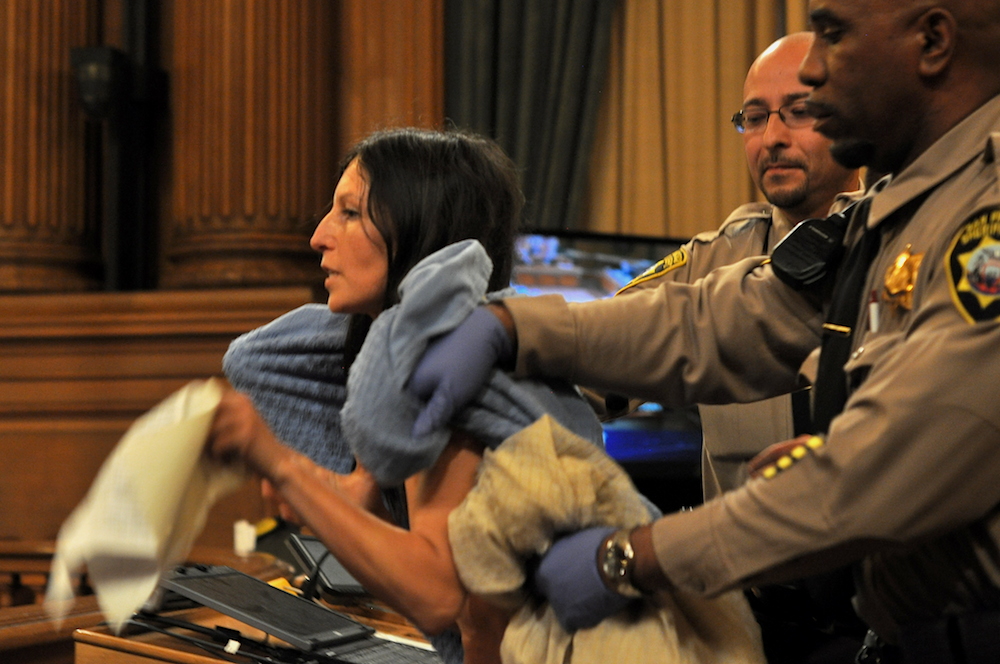 A Board of Supervisors meeting Tuesday that was otherwise focused on housing issues got a surprise visit by nudity activist Gypsy Taub, who used the public comment period to announce her Thursday wedding on the steps of City Hall. Photo by Josh Wolf | San Francisco Public Press.

Josh Wolf, Reporter |
LikeTweet EmailPrint More
Bottled water is the latest bottled beverage in the line of fire after Supervisor David Chiu proposed controlling its sale in San Francisco. The proposal comes soon after another proposal, to tax soda, which will likely appear on the ballot next November.
“San Francisco has been a leader in reducing greenhouse gases and this is why we can and should be a leader in also reducing our addiction to plastic bottled water,” Chiu said. “In the 1990s the industry experienced an enormous growth, but before that everyone managed stay hydrated.”
Chiu’s plan would prohibit promoters hosting events on city property where tap water is available from distributing bottled water. But foot races and other sporting events would be exempted, and waivers would be available in the event of public health concerns, he noted.
Chiu said he was encouraged to make the proposal after organizers of the America’s Cup decided against selling water bottles. Other public events in the city, including wine and beer festivals, are already doing the same.
The ordinance also would prohibit businesses applying for permits or leases from the city from selling bottled water. Existing businesses would be allowed to continue selling the bottles.
Chiu’s plan calls for expanded access to tap water at city parks and other public spaces.
New buildings accessible to the public already are required to have water filling stations.
“I believe this approach is a commonsense way to tackle the enormous problem,” Chiu said.

Landlords who pressure tenants to move out or accept payouts are breaking the law already, but new legislation would make it easier for renters to strike back.
A plan by Supervisor David Campos, which passed unanimously Tuesday, would enable the Rent Board to hold hearings when tenants claim harassment.
“The problem with the law as it is today is that in the face of this harassment, the only recourse that is currently available to tenants is that they can go file an action in California Superior Court,” Campos said. “To be able to file an action in Superior Court, things have to be so bad that you are able to convince an attorney.”
But Supervisor Norman Yee was skeptical. He suggested that unscrupulous tenants might file complaints with the Rent Board when no harassment actually transpired. In other words, the anti-harassment legislation could enable tenants to harass their landlords.
“I think the possibility for abuse is something that exists regardless of what we’re talking about,” Campos said in response to Yee’s objections. “It is not a one-sided situation, so nothing will happen if a frivolous case is presented and the facts don’t really support an allegation of harassment.” In the end, after considering Campos’ rationale, and that of the City Attorney’s Office, Yee joined the board to support the change.
Campos and Chiu also introduced a resolution on Tuesday that calls on the state government to give local governments control over how landlords can use the Ellis Act. Real estate speculators can use the act to push out longtime San Francisco tenants who would otherwise be protected by rent control. Mayor Ed Lee and supervisors have united around the need for this state reform.
“We are at a historic juncture, where we have all the elected key players united behind the effort of changing state law,” Campos said. “This resolution also notes the need to do something, not just at the state level, but also at the local level.”

After years of ironing out the details, the Board of Supervisors agreed Tuesday to trade land held by the San Francisco School District to permit affordable housing construction.
Supervisor Jane Kim said the district owns property it has no plans to use, and [the school board] has been exploring the best use for that resource before she joined the school board in 2006.
Under the deal, the land obtained by the city during the demolition of the Central Freeway, which is located around McAllister Street and Ash Alley, will  be available for below-market-rate housing.
In exchange the school district will receive property at 1950 Mission St., between 15th and 16th streets, and 1101 Connecticut St., at the corner of 25th Street.