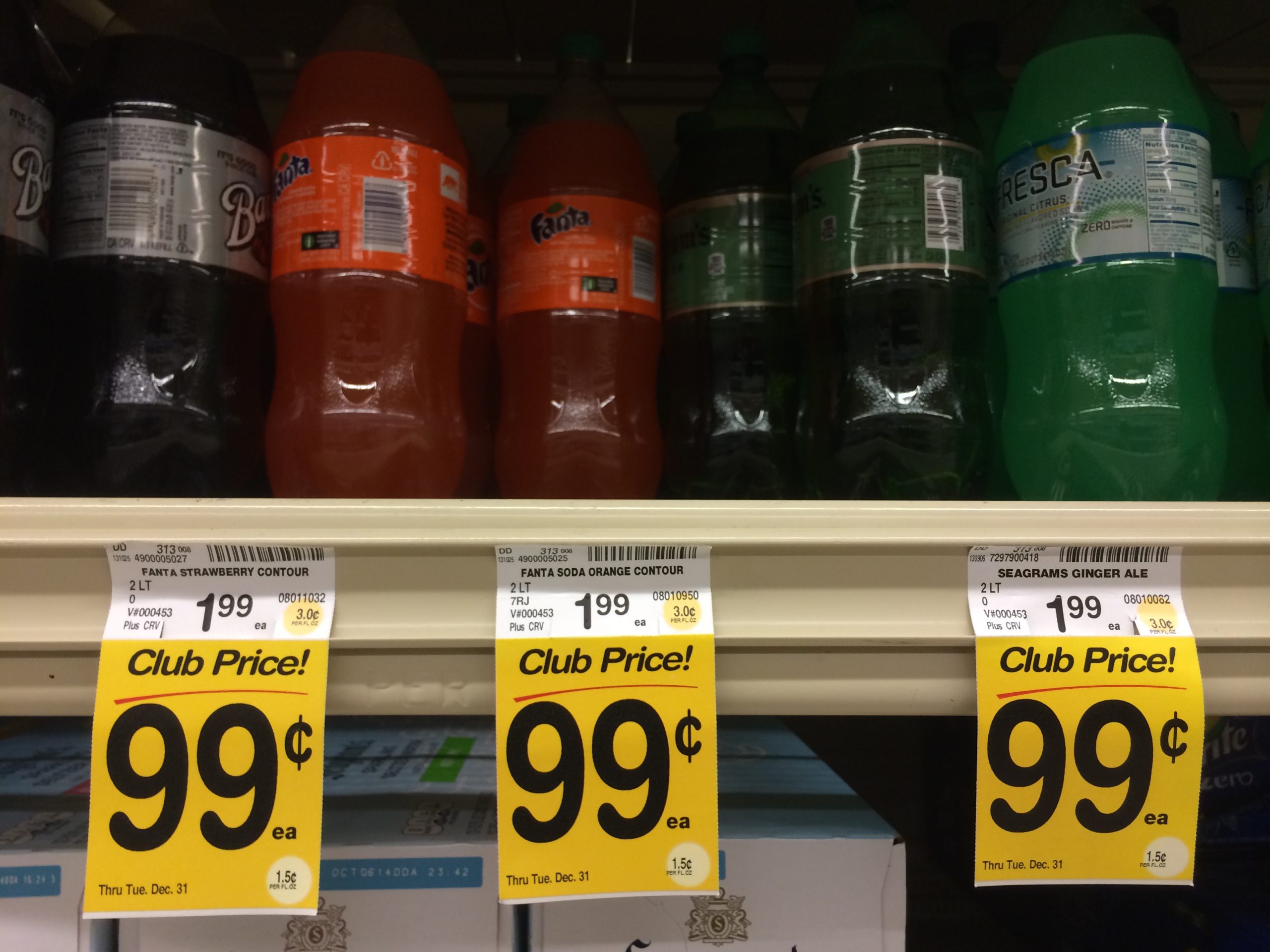 The cost of bottles of soda would more than double under a proposed tax that is likely headed to the November 2014 ballot. Photo by Josh Wolf | San Francisco Public Press

Prisoners at San Francisco’s county jails may not have to pay so much to call their loved ones after members of the Board of Supervisors balked at renewing a contract to extend pricey phone service Tuesday.

The contract with Global*TelLink, expected to generate more than $3 million in revenue over its 4-year term, has provided phones for inmates at the jail since 2010. The contract was originally written to last three years, but the Sheriff’s Department extended it an additional year over the summer and asked the board to approve it retroactively.

Inmates must pay an initial fee of between $1.25 and $3.95 for each call and are then charged between 10 and 69 cents a minute depending on whether the call is local or out-of-state. Under the contract the Sheriff’s Department receives 65 percent of that money, which goes to an account used by the department to provide inmate services and supplies.

“It seems that we are charging exorbitant rates for our inmates to call their families,” Supervisor Jane Kim said.

Kim said that she appreciated that the money raised from the fees went back to the inmates, but questioned why the office of Sheriff Ross Mirkarimi could not directly reduce the cost of the calls. Kim also questioned why the supervisors did not have a chance to weigh in on the contract before it was extended.

“It should be that we are charging the amount of money that’s needed to operate,” Supervisor David Campos said.

The Board of Supervisors will revisit the contract at its Dec. 10 meeting.

UPDATE 8:38 p.m.: Chief Deputy Kathy Gorwood issued this statement: “Despite a poorly regulated industry at the federal level, Sheriff Mirkarimi is committed to defraying the cost of inmate calls through the use of the Inmate Welfare Fund. The Sheriff’s Department is exploring a variety of options including the use of pre-paid phone cards for this purpose. The Sheriff’s Department intends to have a new inmate phone contract next year, at which time, Sheriff Mirkarimi will prioritize reduced inmate calling rates.”

Supervisor Malia Cohen is determined to keep sex offenders out of a new homeless shelter the city plans to open in her district, but some of her peers on the board are not sure that is the best policy.

The San Francisco Human Services Agency received a $978,000 loan to develop a 100-bed homeless shelter at 2115 Jennings St., which is about two blocks from the intersection of Van Dyke Avenue and Third Street. Mother Brown’s Kitchen is next door, and provides drop-in services and is home for about 80 people who are sleeping in chairs at the site.

One person staying at Mother Brown’s Kitchen is a sex offender, Cohen said, adding that her constituents are concerned that sex offenders will be living at the shelter, located near a park with many children.

Cohen called on the San Francisco Adult Probation Department to enforce a state law at the new shelter that prohibits sex offenders from living within a half-mile of a school or park. But the Human Services Agency, which will operate the shelter, says it does not investigate whether people seeking emergency shelter are listed as offenders.

Supervisor Scott Wiener pointed out that there is almost nowhere in San Francisco where sex offenders are allowed to reside, and that no one should be denied access to shelter services.

“I have issues with the way state law is set up,” Wiener said. “We set people up for failure. Homeless shelters should be safety nets for whomever needs them.”

Jessica Flintoft, the re-entry division director for the Adult Probation Department, said her department will follow the Board of Supervisors’ directive to enforce the state law at the Jennings Street shelter, but that it was unclear how many of the 124 registered sex offenders supervised by the department would be affected.

“The state law has long ago been recognized as being unenforceable,” Flintoft said. “There’s no where in San Francisco that technically is outside of that area. What we do is we refer clients to the Public Defender’s Office and they go through a somewhat laborious, but rightfully rigorous process, to file a writ of habeas corpus in order to get the residency restriction removed.”

If that restriction is removed, then there would no longer be a state law for the Probation Department to enforce, which prohibits an individual from staying at the new shelter. Although Flintoft acknowledged this, she emphasized that her department would still carefully assess the risks before allowing a sex offender to stay at the shelter on Jennings Street or anywhere else in the city.

“It does ask that we treat this shelter differently,” she said. “There is not any other local legislation, that I’m aware of, that directs the Adult Probation Department in this particular way.”

In order to deal with these impossible requirements, the Probation Department refers people to the Public Defender’s Office.

Supervisor Cohen has said she is in favor of more homeless shelters in the city, but does not want them targeted at her district, where there is already rampant poverty.

“This proposal will be introducing a new vulnerable population to an area that is not zoned for housing, where we have public safety challenges and limited public transportation,” Cohen wrote in a recent op-ed in the San Francisco Chronicle. “I cannot support this proposal at the current location.”

Although the location may not be ideal, and is about a half-hour bus ride from other homeless resources available in the Tenderloin, the majority of supervisors agreed that there is an overriding need for more shelter beds in the city.

“We voted to kick homeless people out of our parks,” Campos said. “We are making it harder for homeless people to be out there. We can’t just start prohibiting people for being people, and not given them options, and not putting a roof over people’s heads.”

Supervisors Katy Tang and Malia Cohen voted to against moving forward on acquiring the loan, while the nine voted to accept the money.

Supervisor David Chiu proposed a fund to help nonprofit organizations remain in San Francisco. With commercial rental rates soaring, many nonprofits are at risk of being displaced he said. Chiu’s proposal, modeled after a similar program introduced in 2000, would create a pool of money equal to the amount the city is giving up as part of its mid-Market Street tax exclusion zone created to keep Twitter and other tech firms from leaving town.

Chiu said he intended to create a working group to decide how it would use the money to help prevent displacement.

Mar and Wiener introduced nearly identical ballot measures to create a tax on sugary beverages like sodas and energy drinks. The two-cent-per-ounce tax would benefit physical education and nutrition programs in public schools and parks. On a two-liter bottle of soda, the proposed tax would add about $1.35 to the total. The two ballot measures will be merged into one proposal in coming months, Wiener said.