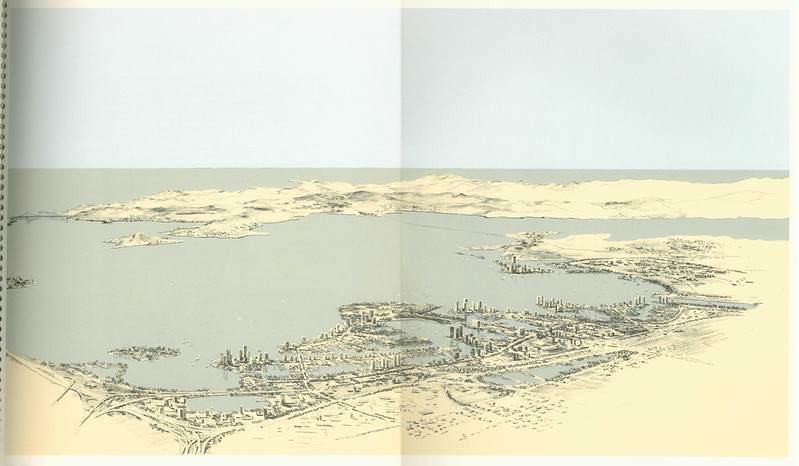 From "A Proposal for the Development of the East Shore Tidelands of San Francisco Bay, Prepared for the Atchison, Topeka, and Santa Fe Railway Company by Victor Gruen Associates, October, 1963." via Eric Fischer on Flickr. Used under CC BY 2.0.

Decades of explicitly and implicitly racist policies have left the Bay Area not just unaffordable, but also deeply segregated. That was the consensus among panelists speaking to regional government administrators, nonprofit staff and community advocates who gathered last week at a conference in San Francisco to confront the state’s legacy of public policies that led to racial segregation.

They convened at the San Francisco Federal Reserve Building on Market Street to talk about the future of fair housing in California. Now, the panelists said, governments and community advocates must work to implement new laws — and outmaneuver federal policy — to undo the wrongs of the past.

The meeting was organized by a coalition of public health departments known as the Bay Area Regional Health Inequities Initiative, and Public Advocates, a civil rights law firm.

“By some measures of segregation, the Bay Area is more segregated now than it was in the 70s,” said Will Dominie, policy manager for housing affordability and equitable development at the regional health inequities initiative. “We also know from their data that whites are the most racially segregated group in the region. So often when we talk about segregation, we talk about communities of color, and that’s really important. And also throughout the day, I want to also keep our focus squarely on exclusionary white communities and what needs to happen to break up discrimination in those places.”

The Bay Area Regional Health Inequities Initiative, which was founded to confront the differences in life expectancy by race, income and neighborhood in the Bay Area, looks at housing through a health lens. For example, Dominie said he recalled hearing from workers in an HIV-AIDS program who could not find clients because they had been displaced from their homes. When the workers went to deliver medication, the patients simply weren’t there. Parental and child health program workers, Dominie said, have struggled to help patients living in their cars have healthy pregnancies and births.

“We no longer live in a time, if we ever did, where we can look at those 25 years of difference in life expectancy and not understand, for those of us in government, not understand our role in creating some of those things, conditions, that caused harm,” Dominie said.

With a view to changing those conditions, much of the conversation at the conference was about state Assembly Bill 686, which requires local governments to “affirmatively further fair housing.”

“One of the great things about the bill is it gives California a really strong definition of what it means to affirmatively further fair housing,” said Tyrone Buckley, Senior Policy Specialist for Fair Housing at the state’s Department of Housing and Community Development. “Not only do we need to be looking at access to opportunity, in terms of opening up exclusionary communities, but also thinking about what we can do from a community development standpoint to build up communities that are struggling.”

Cities and counties in California are now facing more tangible accountability mechanisms. Sam Tepperman-Gelfant, managing attorney at the civil rights legal nonprofit Public Advocates, described an Obama administration rule change in 2015 as the turning point for fair housing. But the 2016 election brought a distinctive shift in priorities at the federal level. Housing and Urban Development Secretary Ben Carson, prior to his appointment, had compared the pursuit of affirmatively furthering fair housing to what he called “failed socialist experiments.” And in January, the federal government issued a proposed rule to roll back the 2015 federal fair housing requirements.

Enter California’s AB 686. The 2018 law created an obligation for municipalities to do what the 2015 federal rule had mandated: Affirmatively further fair housing in all decisions and programs related to the Department of Housing and Community Development.

“I want to point out that this really means race. Fair Housing is about race,” Tepperman-Gelfant said. And those decisions might not even be explicitly about housing to be obligated to consider fair housing.

But deadlines set in AB 686 are approaching, and he predicted that cities will find that they have not identified sites for the construction of affordable housing in high-resource neighborhoods.

“If that’s the case, start thinking now about where you’re going to rezone, because in a couple years, there’s going to need to be room for affordable housing in the high-resource, whiter neighborhoods of your jurisdictions,” he said.

By January 2021, cities must not only have an assessment of fair housing in their housing elements — which are official, comprehensive studies of available housing and projected need for housing — but have a list of parcels available for residential development that also actively further fair housing.

Housing elements are informed by the Regional Housing Needs Allocation, which sets benchmarks for how much housing cities are supposed to be producing — and for how much of it should be market rate, and how much below market rate. The benchmarks are reassessed every eight years. Currently, the Bay Area falls far short of its goals. When Ada Chan, a regional planner with the Association of Bay Area Governments, misspoke and suggested the region had surpassed its affordable housing goals, murmurs and laughter broke out before she corrected herself, saying, “That would be like some visionary dream!”

Barbara Kautz, a former San Mateo city planner and current partner at the law firm Goldfarb and Lipman who advises public agencies on zoning and planning, said the key aspect of housing elements is to have enough land zoned for dense enough development to meet regional housing goals.
“Just to terrify everybody,” Kautz said, the amount of housing the region will be expected to build in the next needs assessment cycle will at least double. “So given how the numbers are going to go up, and the lower income requirement, you can expect that there’s going to be a lot of upzoning required in the next in the next cycle.”

These plans have to be made with the communities they will affect involved in the process, said Tameeka Bennett, program manager of equitable development at Urban Habitat who spoke as a panelist addressing community outreach.

She described “a forced mass exodus of thousands of families of color and immigrants” from the Bay Area in the last decade. In 2017, Bennett participated in San Mateo County’s process for assessing fair housing while she served as the executive director of Youth United for Community Action. But the consultants hired by the city didn’t represent her community, Bennett said, and seemed uninterested in community members’ comments or in scheduling focus group meetings at times when residents could attend.

“It was really unfortunate to read the final assessment, because it completely missed the mark on everything that folks have come out to say,” Bennett said. “It omitted information about segregation, disparities and access to opportunity, disproportionate housing means.”

Despite community organizers’ efforts, and despite a letter they sent to the Department of Housing and Urban Development calling the assessment insufficient, it was finalized without further community input, she said.

“Without any real intention to work with communities and those affected by these policies, I don’t believe that this process can serve, or do what it says that it wants to do,” she said. “You have to get real about working with folks who are bearing the brunt of the housing crisis.”

Doing that, Bennett said, takes much more than surveys by email or text, or even flyers mailed to homes. She commended efforts like those of Sonoma County, whose consultant Ana Lugo also spoke on the panel, for ensuring that community members have a say in the planning process. That could mean inviting them to help draft surveys, or consulting them to identify key stakeholders, she suggested.

“Unless you’re partnering with folks who have been, again, bearing the brunt of these racist policies, nothing is going to change,” Bennett said. “And I know it’s hard to look at biases within your own department and figure out how to overcome those. But I think that if we’re going to make real change in the housing world, and if we’re really going to affect this crisis that is not exclusive to the Bay Area, but is really serious in the Bay Area, we’re going to have to do things differently.”