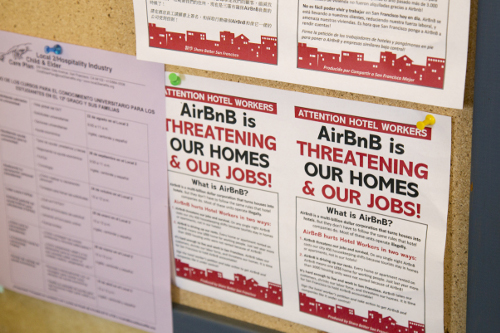 Proposition F would actively regulate the city’s short-term rental industry, much of which operates largely outside of City Hall’s knowledge and control. Airbnb, HomeAway and similar businesses have made it easy and profitable for homeowners, or even long-term renters, to use their living spaces for informal bed-and-breakfasts, hosting visitors for days or weeks at a time. This unmonitored industry has ballooned. The San Francisco Chronicle surveyed some Airbnb data from last year, revealing almost 3,785 distinct hosts on the company’s website. About 500 of those hosts had listed more than one property, implying that they used Airbnb as a major source of income. Almost all those listings were for rooms, entire houses or apartments, which means that those homes were effectively taken off the conventional rental market. Critics say that reduction in supply has contributed to rising real estate prices, making it harder for people with low and modest incomes to live here.

Current law requires hosts to register with the city, after which they are allowed to rent out entire homes for up to 90 days per year — unless they are staying on site, in which case they can rent out rooms year-round. But to date, only about 700 hosts have registered, implying that thousands of others are flying under the radar. City Hall currently has no way to find them.

If Proposition F passed, then no city-registered host could rent out a home for more than 75 days per year, even if that host stayed on site.

Certain types of homes could no longer be used as short-term rentals:

To make sure that San Francisco hosts were complying with the law, Proposition F would:

Proposition F would give people a financial incentive to report suspected scofflaw hosts, which opponents say would turn neighbor against neighbor.

The Board of Supervisors has shown that, at least at the moment, it would rather bolster existing laws than drastically change them. At a July meeting, the supervisors decided by a narrow margin not to pass an ordinance, proposed by Supervisor David Campos, that resembled this measure. Meanwhile, the supervisors decided to create a new agency, the Office of Short Term Rental Administration and Enforcement, tasked with tracking and enforcing existing regulations.

Proposition F would cost between $20,000 and $200,000 per year, according to the city controller’s estimates. This would cover the cost of notifying residents that their neighbor had registered as a short-term rental. This assumes that the city would not have to hire more staff. If that assumption proved incorrect — and it might, if the measure’s new policies revealed a slew of San Francisco hosts now in hiding — then additional staff would cost the city more.

City Hall would likely also lose revenue from currently registered hosts, who pay a hotel tax, if they could operate only 90 days per year. But those losses could be offset by the many new hosts who would have to register after the city discovered them, using data from rental listing sites.

Whether or not Proposition F passes, the city will also shell out $900,000 to run the new enforcement office.

Dale Carlson, a founding member of ShareBetterSF, the San Francisco branch of an anti-Airbnb coalition that was founded in New York.

Mayor Ed Lee, who has said that existing laws should be given time to work.

We want your questions. If you are still wondering about how Proposition F will work or impact San Francisco, ask! Use #election2015 and our Twitter handle (@sfpublicpress) and we will do our best to get answers.