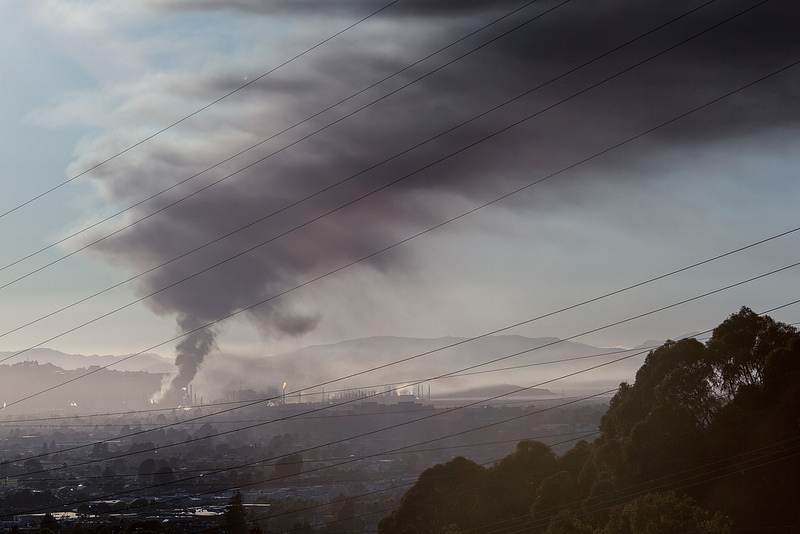 A fire at the Chevron refinery in Richmond sent a huge plume of smoke into the air Monday evening. Creative Commons image by Flickr user Jeremy Brooks.

Monday night’s large crude-oil fire at the Chevron oil refinery in Richmond, which produced a towering column of acrid black smoke and aroused widespread panic in the area, served as a dramatic backdrop to new research showing that minorities and low-income people believe they bear the brunt of health problems related to air pollution.

Investigators are still working to determine whether the refinery incident posed long-term health risks to neighboring African American and Latino communities. After the fire, the second such major incident in five years, Richmond residents were told to “shelter in place” by staying home and shutting all windows and doors to avoid inhaling dangerous pollutants.

On Tuesday, the Public Policy Institute of California released results of phone interviews with 25,000 Californians in July as part of its annual environmental issues survey. The poll found that 62 percent of Latinos and 53 percent of African Americans report air pollution as a serious threat to themselves and their immediate families, a higher percentage than whites at 41 percent or the general population at 50 percent.

When the survey respondents were asked if social class was a factor in endangering the health of low-income people, more Latinos and African-Americans agreed: 66 percent of Latinos and 58 percent of African Americans said yes, as opposed to 47 percent overall and 35 percent of whites.

“The statistics bear out what we see with our eyes and smell with our noses,” said the Rev. Daniel Buford, director of the Prophetic Justice Ministry of Allen Temple Baptist Church in East Oakland. He spoke at a panel discussion on Monday at the World Affairs Council in San Francisco, sponsored by the Public Policy Institute and New America Media.

While 41 percent of adults statewide reported asthma or other respiratory ailments in their households, the rate was higher among African Americans (54 percent) and Latinos (43 percent).

Buford said the black communities in Richmond, Oakland and San Francisco’s Bayview neighborhood are dying as a result and that these communities formed a “toxic triangle.”

The poll found that many state residents were unaware of major climate change policy reforms. The majority of respondents had not heard about California’s carbon cap-and-trade program, which begins in November. Under the program, the state would issue permits to companies that limit greenhouse gas emissions and allow them to sell unused permits to other companies. Fewer people in ethnic minority communities — 27 percent of African-Americans and 26 percent of Latinos — were aware of the program than were whites or the general population.

But members of most ethnic communities were apparently ambivalent about the program. Despite support of cap-and-trade from a majority of African Americans and Latinos, higher percentages from both groups — as compared with whites and the general population — feared that cap-and-trade would worsen health risks for low-income residents. Sixty-six percent of Latinos and 60 percent of African-Americans said they thought the new rules would create health problems. Less than half of all adults — 48 percent — and about one-third of whites — 34 percent – said there would be potential negative impacts.