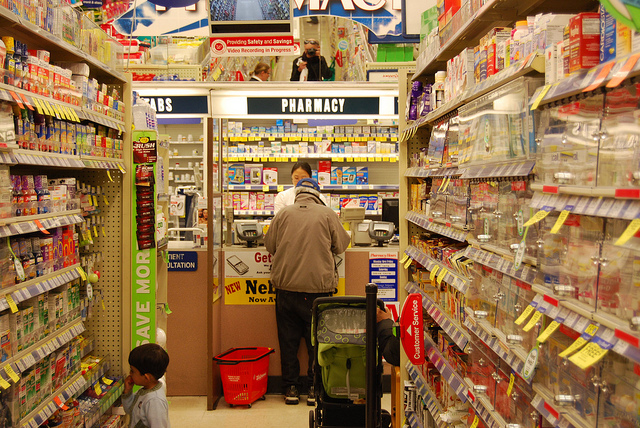 Drugs, drugs and more drugs. Much of it ends up in area waterways. San Francisco leaders want to change that. Creative Commons image by Flickr user

Starting as soon as August, San Franciscans will be able to dispose of their unused medicines for free at 16 independent pharmacies and five police stations throughout the city. The pharmaceutical industry is funding the pilot program with $110,000, after facing city plans that threatened to extend producer responsibility to pharmaceuticals.

The program has funding for at least 12 to 18 months after which officials hope it will be become permanent. All household medication can be brought to police stations, and participating pharmacies will collect everything else except controlled substances.

Disposing of pharmaceuticals has been a chronic problem in San Francisco without a sustainable solution. Currently, no pharmacy accepts unused or expired drugs. For decades, officials told people to simply flush their unused drugs or throw them in the trash.

San Francisco supervisor Ross Mirkarimi, who led the negotiations with the pharmaceutical industry to fund the pilot program, said that the scope of the problem with pharmaceutical waste in the Bay Area waterways is not fully known.

“What we do know is that our infrastructure is not designed to filter waste,” said Mirkarimi.

Most European countries have take-back programs for unused or expired medications. In the United States, the medical waste disposal is primarily regulated at state level. One problem is that a federal law states that only law-enforcement officers may collect controlled substances. Colorado, for example, is piloting a program with eleven take-back boxes around the state and Washtenaw County in Michigan has eleven pharmacies accepting unused medication. Teleosis, a nonprofit organization for greener health care, lists take-back programs nationwide.

The pharmaceutical companies have been reluctant to take responsibility for the disposal of their products. When Mirkarimi initiated an ordinance to extend producer responsibility to pharmaceuticals, the companies called for a more “collaborative” approach rather than an ordinance to require them to develop and implement their own collection program. After negotiations, PhRMA, the trade association for pharmaceutical companies, donated $100,000, and Genentech gave $10,000 toward the pilot program.

Big chains like Walgreens and Safeway decided not to participate. Mirkarimi said he was neither disappointed nor surprised.

“They need to understand what it means to become corporate partners and they’ve got a long way to go,” Mirkarimi said. He said the decision will reflect poorly on the big chains. “I think people will start to ask the obvious question: ‘Why are Safeway and Walgreens not providing this service either free or at very low cost?’”

“We also believe that there are legal risks if we participated in the initiative and that it could violate federal drug enforcement rules regarding the collection of controlled substances,” wrote Walgreens spokesman Robert Elfinger in an email. The pharmacy participates in local take-back events organized by Bay Area law-enforcement organizations.

Apart from Walgreens, at least Safeway’s and Kaiser’s pharacies sell similar envelopes. San Francisco residents can pick up these envelopes for free at three locations. This SF Environment initiative will be discontinued when the envelopes run out because they are too expensive ($3.75 each).

“The envelopes are really expensive for the city to provide free but we also don’t think that pharmaceutical disposal should be something that people should have to pay for,” said Caitlin Sanders, a Residential Toxics Reduction associate at San Francisco’s Department of the Environment.

The pilot program is still in the works. SF Environment does not want to reveal the take-back locations because not all pharmacies have signed the official paperwork. Nine of the city’s 11 districts have independent pharmacies and in each of them at least one pharmacy is participating in the program. SF Environment chose the participating police stations to cover the outlying areas. The program is expected to launch in August.

Sanders said she hopes that the pilot is a success and that the companies will renew the funding voluntarily. If not, supervisor Mirkarimi will consider pushing forward with the legislation to extend the producers’ responsibility. “That would depend on how well the pilot program works, what kind of relationship — positive or not — we develop with the pharmaceutical industry, and if federal law evolves by that time,” he said.

Having a place to take unused medication does not mean that people actually will do it. Even in countries with effective take-back programs, pharmaceutical waste ends in the wrong place, especially liquid waste that is too often flushed into the sewage system. That’s why about $50,000 of the pilot program funding is going to outreach and education about the program.

Mirkarimi has also proposed an ordinance to require all small businesses selling prescription drugs to publicly display materials explaining how to safely and lawfully dispose of unused drugs. The ordinance passed the public safety committee but hasn’t yet been heard in front of [and was passed by] the full Board of Supervisors [on May 24]*.

Siri Markula is a Finnish journalist working for SF Public Press as part of her Innovation Journalism Fellowship at Stanford University. In Finland she works as a news editor at Helsingin Sanomat, the largest-circulation daily newspaper in Scandinavia.