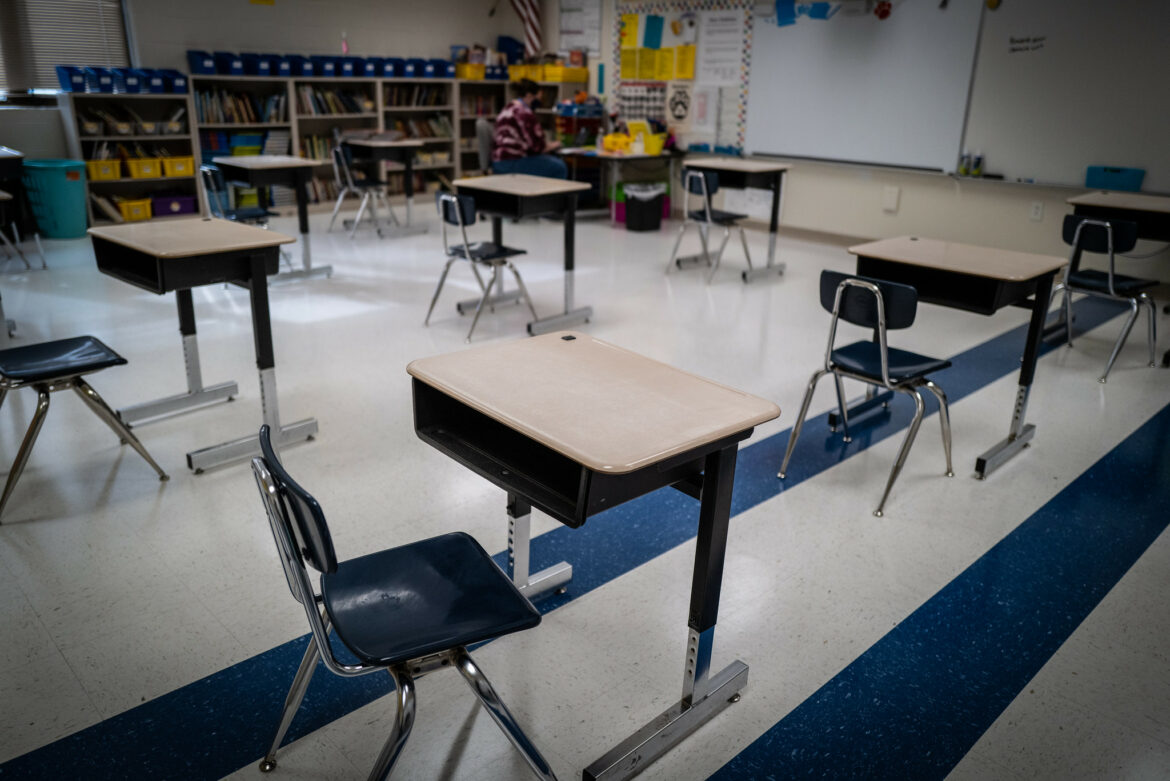 Inside a classroom in Des Moines, Iowa in October 2020 as school staff prepared to return to a hybrid learning model.

San Francisco public schools remain closed and students are still distance learning. Three parents of children in the district told “Civic” how they would like schools to reopen. José-Luis Tekun Mejia, Alicia Cruz and Jennifer Sey also expressed concern about the toll that being out of school for nearly a year has been taking on young people and parents alike.

On Friday, after this interview was recorded, the school district announced schools would partially reopen on April 12, beginning with the youngest students in the district.

Asked what would make them feel comfortable sending their children back to school, Cruz, a therapist with two children in local schools, said “I’m way past that. I feel like it’s safe.”

Cruz said the mental health effects of the extended pandemic lockdown have been near-universal and particularly acute for young children.

“As a mental health provider, you know, I’ve seen the acuity of depression,” she said. “The kids that I’ve been treating are as young as 7-, 6-year-olds that have had acute depression, and even some suicidal thinking. That is unheard of, by the way, it’s not something that I’ve ever seen and I’ve been working with mental health for over 20 years.”

Sey, mother of four including a kindergartener and a 4-year-old, has been active in parent groups pushing California and San Francisco to re-open schools. Frustrated with the state’s lack of progress, she and her family relocated to Denver, where schools are open.

“There are states across the country that have been open safely since the fall,” Sey said. “We can do it safely. We’ve seen it in other places, and I just don’t sense the urgency. That’s what is very concerning for me.”

Tekun Mejia, father of a first-grader and a sixth-grader, is also a member of Coleman Advocates, a public education equity advocacy group. He said a recent survey of members showed many parents are still hesitant to send their children back to school.

“Part of why I think there’s different perspective, too, is that many of our Black and brown communities, we are burying people,” Tekun Mejia said. “We had one of our grandparent members who died just two weeks ago, from COVID.”

More than just coronavirus safety protocols will need to be put in place for schools to reopen effectively, the parents said. Cruz said academic standards should be relaxed or revised so as not to put children who had fallen behind under pressure.

“We’ve lost a full year. So that needs to go out the window,” Cruz said. “I’m more interested in the social emotional development and opportunity for my child to reintegrate back into the school system. That to me is more important.”

Do you have something to add to this conversation? Leave us a voice message and we may include it in a future broadcast:

The school system, Cruz added, will not be prepared to handle the mental health needs of children after a year of distance learning. Tekun Mejia said administrators must also be cautious not to respond to the inevitable behavioral problems returning students will exhibit with authoritative crackdowns. That means “not criminalizing or over-policing our kids, which is a lot of what traditionally tends to happen when there are issues that come up that relate to behavioral or violence or whatnot,” he said.

On a walk through San Francisco past a cluster of private schools that have reopened, Sey said, she saw the difference being back in school can make for a child’s mood.

“I saw just hordes of kids coming out and smiling and laughing. And you know, I hadn’t seen my own kids smiling and laughing like that for some time,” she said. “It just made me so incredibly sad that those kids should have access to that and that the 54,000 kids across San Francisco just simply don’t.”