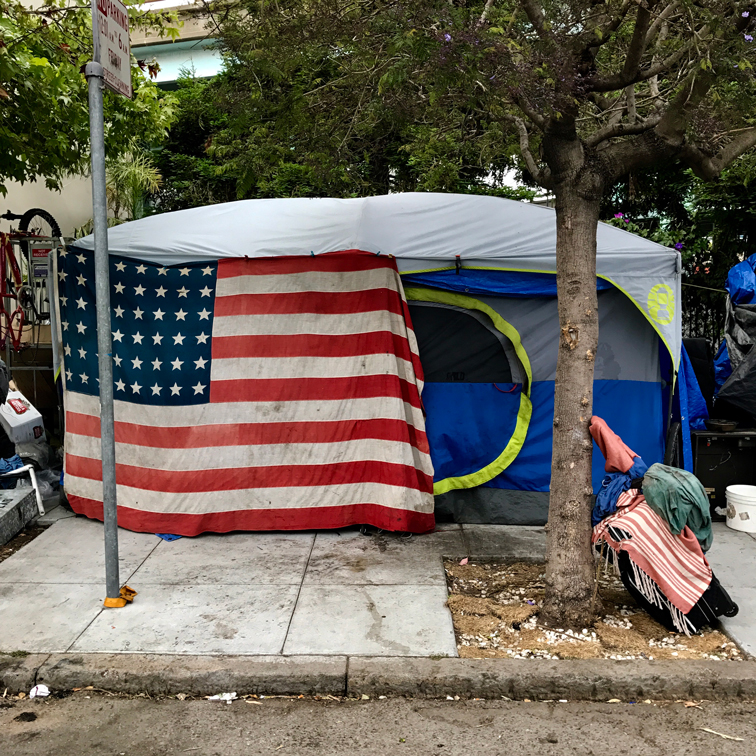 This tent was part of an encampment at the foot of Potrero Hill in May. Photo by Judith Calson // San Francisco Public Press

More than 20 media outlets revisited the problem of homelessness during the last week of June as part of a continuing campaign of coverage under the banner of the S.F. Homeless Project. The coordinated effort, which started a year ago, encourages newsrooms to cover the issue from a variety of perspectives, hoping to bring homelessness to the attention of neighbors and city leaders.

In January, the city counted 7,499 homeless individuals, virtually the same number recorded in 2015 through San Francisco’s biennial Point-in-Time count. The most vexing barrier to ending homelessness remains the astronomically expensive housing market.
Of the articles published so far, most focused on what has changed with homelessness in the Bay Area since the initial week of coverage in June 2016. (See the Public Press’ just-published project “Navigating Homelessness — Which Way Home?”) But a few of the stories presented ideas that could, perhaps, contribute to the overall aim of ending homelessness — or at least proposals that could help homeless individuals cope better with life on the streets.

Change the shelter system with “pay-for-success” and navigation center models.

As the city channels resources into opening more “navigation centers” — San Francisco’s novel approach to shelters that are meant to lead the homeless to supportive housing — traditional shelters seem to be falling behind.

The city has made few changes to the shelter system, which many individuals are reluctant to take advantage of because of threats, violence, and theft, as well as because of rigid rules, such as limits on pets and sleeping with partners. Navigation centers claim to provide a more welcoming environment with on-site case managers offering help and services. But, as the Public Press reports in its summer issue, navigation centers may not be as effective as promised at placing people in long-term housing.

There is more than one way to rethink shelters. In New York City, home to one of the most extensive shelter systems in the county, the nonprofit Bowery Residents’ Committee plans to transition to a “pay-for-success” model. Rather than prioritize fitting more people into existing facilities, the shelter will focus on outcomes for residents, such as housing. The model is used across the country for various initiatives (homelessness, recidivism and early childhood education), and San Francisco is analyzing how pay-for-success could better address issues in workforce development, housing, public health and human services. The model seeks to fund up-front costs through donations and investments from the private sector, and asks only that the city government repay investors if the program meets its goals. The Bowery Residents’ Committee is unique in its attempts to apply the pay-for-success model to upgrade a traditional shelter.

San Francisco cannot build shelters or affordable housing fast enough to keep up with the demand. Former Mayor Art Agnos has proposed using a decommissioned amphibious assault ship, the USS Peleliu, to house around 5,000 people on the water.

The ship already has housed homeless San Franciscans. When Agnos was mayor during the 1989 earthquake, several hundred people whose homes were destroyed found refuge on the Peleliu for weeks. He cites other cities’ use of similar maritime solutions to get people off city streets. Galveston, Texas, used three cruise ships as emergency housing after Hurricane Katrina, and Dortmund, Germany, has deployed two cruise ships to house refugees.

Provide a place for homeless people to safely store their possessions.

People who become homeless often struggle to hold on to possessions. Traditional shelters limit the personal items a person can bring (navigations centers do, too, although to a lesser extent). As on the streets, theft is common in shelters.

Henry Brown, a formerly homeless young man and a member of the Youth Policy Advisory Committee, said lockers in Golden Gate Park would help ease the burden of homelessness. Lockers could allow people to meet social workers, go to work or interview for jobs without having to schlep all of their belongings.

Last year, the Berkeley City Council approved a project to provide storage space so homeless people can safely store their belongings while they seek a permanent place to put them. But the project is on hold because of the projected $350,000 annual cost to staff the program and city laws about sidewalk use.

UC-Berkeley is collaborating on housing in People’s Park.

The ever-present need for more housing in Berkeley includes demand for both student and adult supportive housing. The new mayor of Berkeley, Jesse Arreguín, and the recently appointed UC Berkeley chancellor designate, Carol Christ, have teamed up to tackle both issues. They have proposed building a mix of housing in People’s Park, already a destination for Berkeley’s homeless. While the proposal has gotten some pushback from neighbors seeking to preserve People’s Park as a public space, the partnership serves as a potential example for San Francisco.

Use the cannabis industry for medical marijuana, ID cards and jobs for the homeless.

Homeless activist Amy Farah Weiss, a founder of Saint Francis Homelessness Challenge, is launching a program to help people living in homeless encampments transition from hard drugs to medical marijuana. Though no studies have proved conclusively that medical marijuana helps curb addictions, there is evidence to suggest that medicinal pot might help addicts into recovery. Weiss said medical marijuana can also help reduce the anxiety caused by homelessness, helping people cope with pain and helping them sleep.

Weiss said her pilot program could have other benefits. First, because a legal form of identification is required to apply for a medical marijuana card, this program would encourage people to apply for IDs, which would also allow them easier access to housing options in the future. She said that in the process of applying for the card, homeless people get to talk to a doctor. The growing cannabis industry could lead to future jobs for the homeless, such as rolling joints for medical marijuana facilities, she said.

Board of Supervisors passed a watered-down bill to target fraudulent evictions.

Owner-move-in evictions allow owners of rent-controlled apartments to oust tenants so they or family members can occupy the units. The Board of Supervisors voted June 27 to crack down on fraudulent owner-move-in claims, but did not include enforcement provisions proposed by Supervisors Jane Kim and Aaron Peskin. Instead, they settled on a measure offered by Supervisor Mark Farrell that limits protections for renters.

Farrell’s legislation does not allow landlords to be prosecuted criminally for making fraudulent owner-move-in claims to raise the rent for the next tenant (Peskin and Kim’s proposal made this a misdemeanor). The board also voted down a provision to enforce an existing law that requires landlords to report buyout deals, in which landlords pay tenants facing evictions to leave quickly and quietly. Landlords are supposed to disclose buyout agreements but rarely do, according to the San Francisco Tenants Union and the Anti-Eviction Mapping Project.

City provides services and support to tent villages until occupants can be moved into housing.

San Francisco’s Encampment Resolution Team regularly clears homeless tent encampments, directing people to navigation centers, shelters and other services. But many homeless people instead re-establish the camps in new areas. While the team does refer some to transitional housing, there is not enough space in shelters to take in entire encampments at a time.

Although the idea of having sanctioned encampments may not be entirely new, more Bay Area cities are erecting barricades around these tent villages and providing quality-of-life improvements: sanitation, food and social services. The goal is to reduce serious health and safety hazards while teams work to funnel campers into transitional, and later permanent, housing. (See the Public Press’ March 2017 reports, “Will San Francisco Embrace ‘Sanctioned’ Camps for the Homeless?” and “How Pacific Northwest Cities Have Made Space for Homeless Encampments.”)

Oakland to use bond money to buy and convert hotel into a “navigation center” for temporary housing.

As part of its two-year, $185 million budget for homelessness, Oakland has committed $14 million to purchase a hotel to convert into short-term transitional, supportive housing for the homeless. The “navigation center,” the city’s second, would include job placement and drug rehabilitation programs.

The money comes from a bond measure voters passed in November. Alongside the navigation center project, Mayor Libby Schaff said the money would be used to create affordable housing to protect residents from being priced out of Oakland. Her plan also aims to provide more services to those living on the streets, including portable restrooms and trash cleanup.

Increase the counselors and social workers working alongside police.

San Francisco police have focused on referring homeless individuals to social services rather than arresting them when clearing encampments. But the lack of housing and shelter space, alongside limited access to services, can prove an impediment in connect the needy with help.

One step in solving this problem could be increasing the number of social workers and counselors working with police. Having more staff on hand to connect with those living on the streets could speed treatment and housing placements.

Provide transportation to individuals who are referred to shelters.

In the Castro, only 20 of the 480 homeless people whom the Homeless Outreach Team encountered had used reservations that they had already made for beds in city shelters. A possible barrier? The lack of transportation.

The city is not yet equipped to offer wide-scale transport to shelters because of a lack of resources. The outreach team has a contract for therapeutic transport, and only the most frail are driven to the shelters. The rest must find their own way.

College students who are homeless may not be able to get a bed in the shelter system as easily, because beds fill up quickly during the day while they are taking classes. Although there are some college programs scattered around the country — and in San Francisco — that give one-time grants to help students in crisis, university housing is often unaffordable for extremely poor students.

The California State University system has discussed providing services such as free food pantries to low-income and homeless students. Other states already have free housing programs for needy students, such as the Southern Scholarship Foundation in Florida, which has provided housing to homeless college students for more than 60 years. Potential funding for such a system could include private charities and businesses.