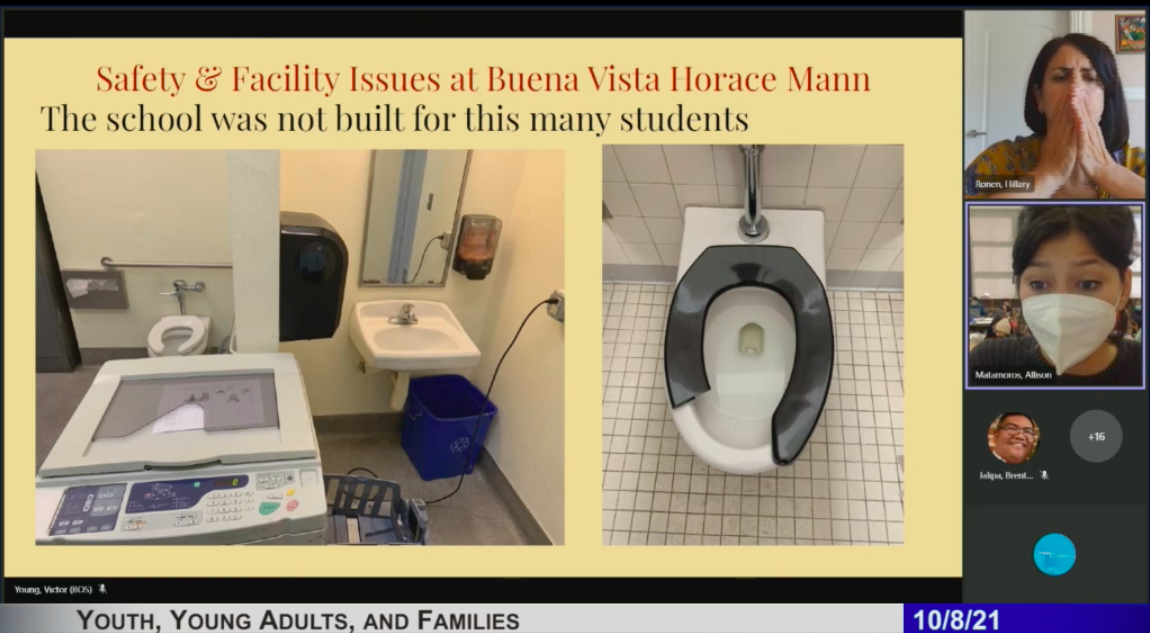 Allison Matamoros, a fourth-grade teacher at Buena Vista Horace Mann School, shares images of conditions at the K-8 public school, including a copy machine plugged in next to a toilet, during virtual testimony before the Youth, Young Adults and Families Committee of the San Francisco Board of Supervisors.

Vermin infestation and electrical malfunction. A copy machine in the restroom. Falling ceiling tiles. Parents, students and staff at Buena Vista Horace Mann School in the Mission testified at recent hearings about these and other chronic maintenance problems they say have plagued the school for years. Officials promised swift action, but delayed a vote on how much money to allocate toward repairs at the school by two weeks.

“Over the years I’ve faced a lot of these problems. I’ve seen kids pee in the yard because they don’t want to go in the bathrooms,” an eighth-grade student told the Youth, Young Adults and Families Committee of the San Francisco Board of Supervisors on Oct. 8. “I’m sure many students can relate to having classes interrupted by rodents running across the room. We’ve had all kinds of problems. And I think it’s just unacceptable, and that this definitely needs to change.”

“It just feels like they don’t care about us anymore,” said another student. “The school that we have here just doesn’t feel safe anymore.”

Allison Matamoros, a fourth-grade teacher at the school, presented slides and a video to the committee showing mold, cracked pavement and a copy machine plugged in next to a toilet with a broken seat in one of the school’s bathrooms.

“What students and teachers are facing at BVHM is inhumane,” Matamoros said. “We’ve had to fight so hard to get basic things. And really, the main times we’ve seen facilities come and fix our building is when we’ve gone to Mission Local, or we’ve complained at school board meetings.”

Mission Local documented conditions at the school in 2019.

Parents, too, expressed their fear and impatience to the supervisors.

“What are you waiting to see happen to implement an immediate solution?” asked Maria Nuñez, a parent and community advocate at the school. Nuñez addressed the supervisors in Spanish, a reflection of the school’s majority-immigrant student body.

“All students deserve to have the same rights regardless of their culture. You have the power to decide the safety of students and teachers,” Nuñez said. “We are human beings. We have the right to be treated as such.”

Elected officials made it clear the testimony moved them.

“I want you to hear from me directly that I am sorry, that we have failed you. This is not right,” Supervisor Hillary Ronen told students.

After the Oct. 8 committee hearing, Ronen promised to bring a proposal to the full Board of Supervisors that would initiate and pay for a full Department of Public Works inspection of the school campus.

Matthew Alexander, a member of the Board of Education, also proposed diverting $55 million, rather than the district’s proposed $15 million, of the revenue from a 2016 bond measure to making repairs at Buena Vista Horace Mann. The reallocation would remove some funding from other proposed projects, including a new school planned in Mission Bay. On Tuesday night, the school board discussed that change at length. Its members seemed to lean toward reducing the reallocation to $40 million, but then put off the decision until their next meeting to allow time for the board’s legal counsel to review the phrasing of the amendment.

The reduced figure came after discussion between board members and Dawn Kamalanathan, chief facilities officer for the school district, who said that on average, fully modernizing an existing school costs between $20 million and $40 million. She and a district spokesperson acknowledged that the conditions may seem unhygienic or appear neglected, but said the school district had corrected conditions that could threaten safety.

“The safety and wellbeing of students and staff is our highest priority and any identified safety issues at BVHM have been addressed to meet requirements,” wrote district spokesperson Laura Dudnick. “In the immediate future, BVHM will go through a design phase for its modernization project and SFUSD will continue to make any urgent improvements that arise while the design for the full modernization is underway.”

Kamalanathan also said that Buena Vista Horace Mann is not alone in needing maintenance. Even before the pandemic, the district’s mechanical, electrical and plumbing shops had a three-year backlog of work requests.

“That’s not being generated by five schools or 10 schools. That is the cumulative requests of the system struggling with buildings that, again, need to be modernized or in some cases have been modernized. But we don’t have the maintenance resources even after a modernization to keep a facility smoothly running,” Kamalanathan said.

Many of the district’s building are old, including Buena Vista Horace Mann, which has been standing for nearly a century.

As officials continue to weigh how much of the 2016 bond money to allocate to repairs at the school, parents want transparency, said Michelle Jacques-Menegaz, coordinator for the Parent Advisory Council to the board of education. Jacques-Menegaz works for a third-party nonprofit organization in her role as coordinator for the group, which was formed to bring parent concerns to the school board.

“If there’s not enough money in the bond to do everything, you do have to make those choices. But what we want to know is, how are those choices being made?” Jacques-Menegaz said. “Is there a rubric? What are the qualifications?”

The Board of Education is scheduled to vote on the reallocation of bond money on Oct. 26.