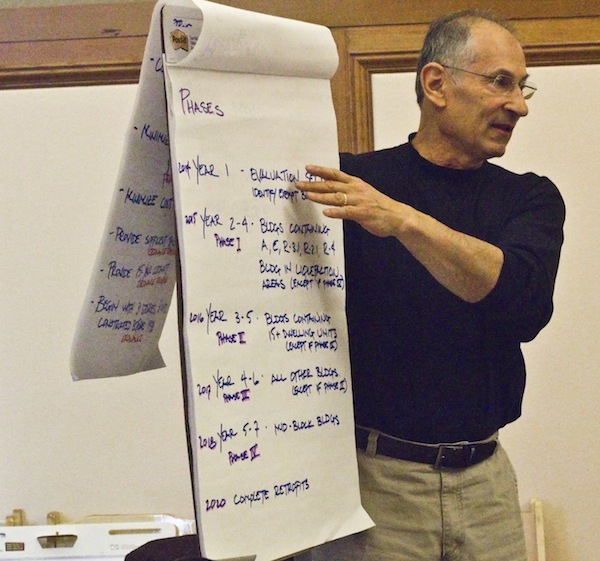 A plan to require seismic retrofits on as many as 3,000 “soft-story” buildings in San Francisco can’t be executed all at once, experts say, because there aren’t enough engineers and contractors who know how to do the work.

Under a plan circulating through City Hall, and expected to be before the Board of Supervisors as soon as February, retrofits would occur in four overlapping groups, with the most hazardous buildings finishing upgrades by 2017. Subsequent deadlines will be staggered out to 2020.

“We can’t do them all at once — we have to phase them,” said Laurence Kornfield, a longtime staffer in the Earthquake Safety Implementation Program in the City Administrator’s Office.

A new committee, the Earthquake Safety Working Group, is tackling how to make seismic upgrades stick. It’s made up of volunteers from the legal, real estate and engineering communities, and it met at City Hall for the first time on Dec. 3 to address soft-story retrofits and other earthquake issues.

The meeting foreshadowed the likely controversy about which property owners should get more time to seismically stabilize their buildings.

Laura Samant, an independent consultant on earthquake risk mitigation, said that even though restaurants and cafes have the highest safety risk, because the first-floor businesses are occupied all day, they should be taken off the Phase 1 schedule.

“Livelihoods will be threatened by this program” when the businesses have to shut during the retrofits, she said.

But Chris Poland, chairman of the Degenkolb structural engineering firm, said retrofit jobs are designed not to interrupt commercial operations.

John Paxton, an independent real estate consultant, said small building owners would be “more concerned about how are they going to get the money together” than owners of larger buildings. So the  city should give them more time to save for the retrofits.

It costs $10,000 to $20,000 per dwelling unit to retrofit a soft story, Kornfield said. That means a typical San Francisco soft-story building with four floors above a bay windowed-ground floor would cost about $60,000 to $80,000 to retrofit. Department of Building Inspection records show that the voluntary program’s cheapest project was $8,000 and the most expensive was $5 million.

The plan would require owners of wood-frame structures built before 1978, and possessing at least three floors and five apartments, to prove with an engineer’s inspection that they are not soft-story hazards. For those buildings needing a retrofit, the city would require the retrofit to meet engineering standards that are still under discussion.

The preliminary four-phase proposal is intended to address the most dangerous situations first:

The riskiest buildings, such as those serving many occupants at one time, or used for educational purposes. These include day care centers, buildings in earthquake liquefaction zones and “assembly occupancy” buildings (large restaurants, cafes and non-retail businesses).

Buildings with 15 or more apartments. These represent a potentially major loss of housing stock. They are at high risk of collapse, because of the bulk and weight riding on top of first-floor openings, such as store windows and garages.

All other freestanding and corner soft-story buildings.

Mid-block buildings. Even if their “soft” first stories fail, these buildings are more likely to survive a major quake because their neighbors can hold them in place during the shaking.