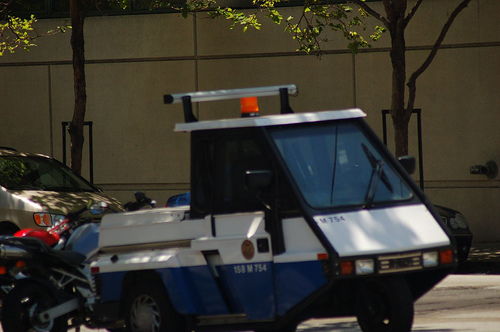 The San Francisco Municipal Transportation Agency must find a way to close a $21 million budget gap before the end of the 2010-2011 fiscal year. One of the suggestions by their Chief Financial Officer, Sonali Bose, is to review deployment practices of parking enforcement officers. Photo by flickr user trexcali.

The San Francisco Municipal Transportation Agency, which operates Muni and parking and traffic, projects a $21 million budget deficit by the end of the 2010-2011 fiscal year. The latest projections from the agency come at time when new Governor Jerry Brown has said he would like cities and counties to take over some state services in order to reduce a $28 billion state budget deficit.

The latest budget report released Monday says the agency is falling short in the parking and traffic fees and fines by $14.2 million. The agency had budgeted $256.6 million for fees and fines, but is now projecting $242.4 million by the end of fiscal year, which ends on June 30.

Sonali Bose, chief financial officer for the agency, presented the budget report to board directors at Tuesday’s meeting, saying that while fees and fines are down, income from parking meters has risen.

Bose said that more drivers are obeying parking laws, which was one of the reasons why fines are down. Also, the convenience of paying with credit cards at new parking meters in the city has played a factor.

Expenditures such as salaries, work orders and maintenance are also on the rise. For example, $466.3 million was budgeted for salaries and benefits, but the agency projects $488.2 million in those costs by the end of the fiscal year.

Bose suggested that the agency address the deficit by reviewing deployment practices of parking enforcement, monitoring overtime usage and hiring and continuing the sale of taxi medallions.

Budget woes are not only problem for the agency. It still has to address restoring the remaining 3.9 percent of Muni service that was cut last May.

The SFMTA cut 10 percent of Muni service last year in order to save millions, but later restored 6.1 percent of service in September. A task force made up of SFMTA staff and the Mayor’s Office was formed to figure out how to restore the rest of the service by Dec. 1.

A draft report on restoring service was issued last month, saying it would take $22 million to add back the remaining service. A final report has yet to be released.