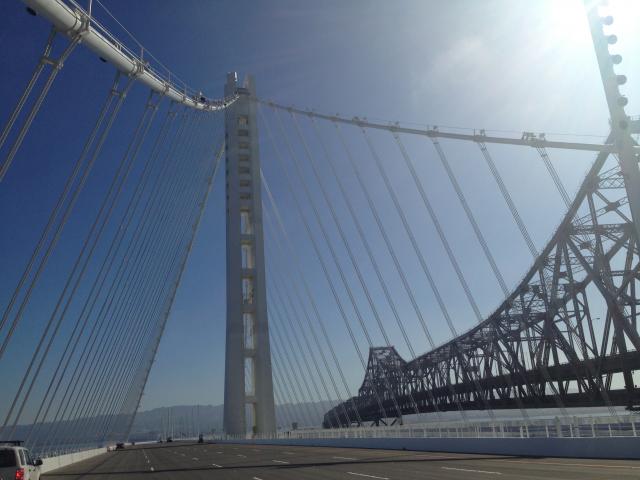 The new eastern span of the Bay Bridge on Friday Aug. 30, before it opened to traffic. Photo by Isabel Angell/KALW

The new eastern span of the San Francisco-Oakland Bay Bridge opened last night, about five hours ahead of schedule. That is, if you don’t count the extra decade it took to get the bridge built.

The new bridge comes 24 years after part of the original collapsed in the 1989 Loma Prieta earthquake. Engineers determined the old span needed to be replaced back in the 1990s, but political wrangling and construction issues delayed the project. In the end, the new span became the biggest infrastructure project in California’s history at $5 billion over budget for a total of $6.4 billion.

Speakers at the opening ceremony—who ranged from transportation officials to politicians to contractors—focused on the seismic safety of the new span, its beauty, and the workers who built it. Oakland mayor Jean Quan said the bridge was a good fit for the city, which deserved an iconic structure, but acknowledged the project’s struggles.

“Like most things in Oakland, it has not always been easy,” she said. But “aren’t the results beautiful?

Read the complete story at KALW.