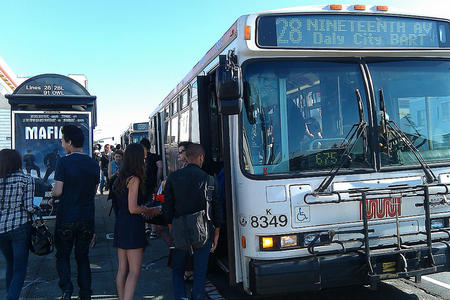 Muni riders get a chance to speak out on the transit agency's budget. Photo by Jerold Chinn/SF Public Press

Rich Peterson, a spokesman for the transit agency, said the brokered labor agreement would save the agency $2.5 million as it faces a $22 million budget deficit for the 2011-2012 fiscal year.

“This new contract with Local 200 will provide a fair labor agreement for our employees while allowing SFMTA to significantly reduce labor costs and provide more efficient service for our customers,” added the agency’s director of administration, Debra Johnson.

Included in the terms of the contract is the reduction of five floating holidays to three.

Local Transport Workers Union 250-A, which represents 2,000 Muni operators, is still in negotiations with the agency.

According to the San Francisco Examiner, the union filed a complaint with the U.S. Department of Labor this week, saying that voter-approved Proposition G, which gives the transit agency more leverage during labor negotiations, violates a federal act guaranteeing workers fair bargaining rights.

The complaint filed by the union could jeopardize federal funding on several of the transit agency’s projects including the Central Subway and the replacement of light-rail vehicles and motor coaches.

The agency hopes to reach a final agreement with the Muni operators by the end of May. If an agreement cannot be made, both sides will be subject to binding arbitration.