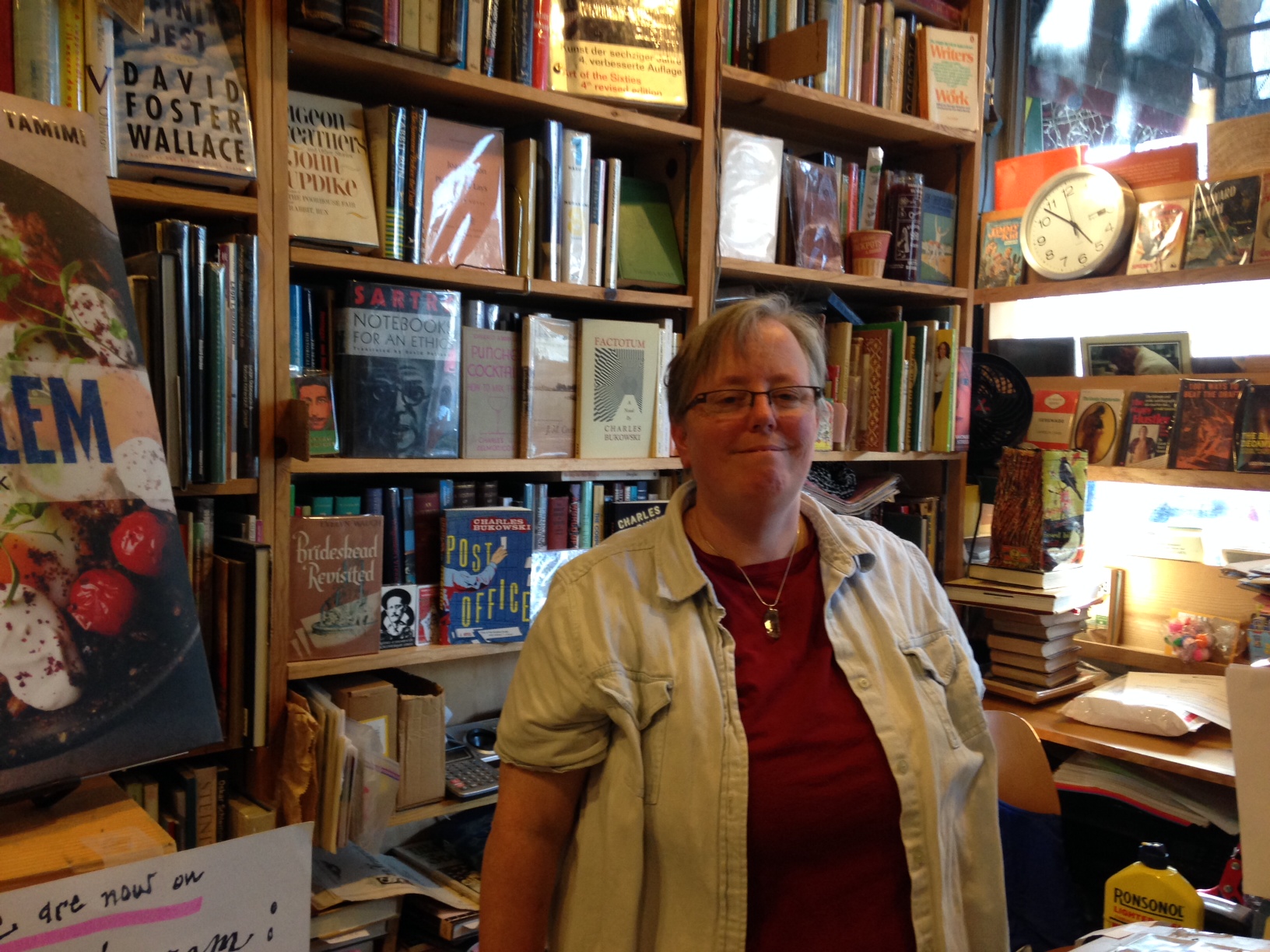 Bibliohead Bookstore shut its doors in September so that the building's owner could perform a mandatory soft-story retrofit. Because the landlord took the opportunity to remodel the building’s interior, he will also raise the rent — beyond what Melissa Richmond, the bookstore’s owner, can afford. Richmond said she has yet to locate a suitable new storefront. Photo by Barbara Grady / San Francisco Public Press.

The number of San Francisco buildings vulnerable to collapse in a major earthquake is far greater than the city estimated when it passed a sweeping mandatory housing retrofit law, according to new data from earthquake inspections.

Engineering and architectural inspections filed by building owners through mid-September, to comply with the city’s requirement to shore up older wood-frame buildings, show that 4,806 apartment buildings need to be retrofitted — about 60 percent more structures than the city estimated when drafting the law.

The buildings may be home to about 60,000 to 70,000 residents, said Patrick Otellini, the city’s earthquake safety director.

That estimate will likely grow as building owners perform the retrofits, submitting detailed information about their properties in the process, said Micah Hilt, a planner in the city’s Earthquake Safety Implementation Program. Before the law passed, the highest estimate of affected residents was 58,000.

Buildings on the list also contain about 2,000 businesses, according to city documents. Owners of some of these businesses now face displacement, or closure in an increasingly expensive real estate market.

The February 2013 law requires retrofits in three to six years, depending on the type and use of the buildings. Additional demand for specialists in earthquake repair could mire San Francisco in new construction that could interrupt retail activity, inconvenience tenants and make it even harder to find qualified contractors and rental space.

San Francisco’s iconic wooden, big-windowed apartment buildings, with their quaint first-floor shops, are some of the most problematic. Garage doors or glass-fronted stores on the ground floor are prone to weaken load-bearing walls, making these so-called soft-story buildings vulnerable to collapse.

The mandatory retrofit law targets wood-frame structures built before 1978, with three or more stories and at least five apartments. Many buildings of this type collapsed in the Marina District during the 1989 Loma Prieta earthquake.

In most cases, tenants can remain during retrofits. But first-floor businesses often need to vacate until the work is done.

One business owner has already been disrupted. Bibliohead Bookstore in Hayes Valley shut its doors on Sept. 19 so that the landlord could perform a soft-story retrofit on the building. But owner Melissa Richmond said she will not be able to return to that location when the work is done.

The landlord told her the retrofits and other remodeling would take four months, and when the building reopened, she said, “he is planning on doubling the rent.” A sign in the window told customers to look out for a new location. But Richmond said she did not yet know where.

“My entire future is in the balance as there are no mechanisms to protect me,” she wrote in a letter to customers on the store’s website.

T2J Thai Restaurant on Polk Street closed in July. A sign outside cited “soft story compliance,” and customers on Yelp have lamented its disappearance. The restaurant’s telephone number is no longer in service.

Staff at the Department of Building Inspection, the agency charged with enforcing the retrofit requirements, said they had not received complaints about business closures, but added that program is new and few owners have started construction.

Residents of the buildings, however, have some safeguards from displacement or steep rent hikes. Though landlords can recoup all of their out-of-pocket retrofit expenses by raising rents over a 20-year period, they cannot add more than $30 annually to the rent for that purpose.

Still, many residents are uncertain about their rights. “We have received a lot of questions about how the program works,” said Robert Collins, deputy director of San Francisco’s Rent Board.

Tenants could avoid paying increases by asserting financial hardship, such as proving that retrofits pushed the rent above 33 percent of their household income.

City staff were working in early October to begin posting warning signs on the front of properties whose owners failed to file inspection reports in compliance with the retrofit law by the deadline in mid-September, Otellini said.

“EARTHQUAKE WARNING!” the city placard reads. “This building is in violation of the requirements of the San Francisco Building Code regarding earthquake safety.” Similar signs have appeared in other cities in the Bay Area, including Berkeley.

The 361 buildings that must display the placards constitute only about 5 percent of all the buildings in the retrofit program. “That’s an awesomely small number,” Hilt said, and it represented a “significant buy-in” from each building owner, who had to accomplish a series of steps by the deadline. “It’s not like paying a parking ticket,” he said.

Public notices are intended to alert residents who have no idea that their homes might be vulnerable. But so far, not everyone is alarmed enough about the danger to worry much about it.

“I don’t know anything about the ordinance,” said Jill Bittner, a resident of a Bay Street townhouse whose owner filed a building inspection just before the city’s deadline. “Frankly I’m more concerned about the car fumes” on the highly trafficked street, which she said were more likely to kill her than an earthquake.

Under the city’s soft-story retrofit rules, buildings used for education, convalescent residences or religious worship have the shortest retrofit deadlines. They must complete the work by fall 2017. Larger buildings with 15 apartments or more must be finished by 2018. Structures with commercial space on the ground floor, and those in geological liquefaction zones, have until 2020.

Though Otellini offered a rough estimate of 60,000 to 70,000 affected residents, he said it was impossible to be more exact than that because the city had not required inspectors to report the number of dwelling units in each building. That might have forced them to reveal that tenants were living in illegal in-law units.

“We didn’t want to put inspectors in that kind of difficult position,” Otellini said. The city will have an exact count only after owners file official work permits through the 2020 deadline.

When the soft-story law took effect early in 2013, city staff sent letters to landlords of 6,539 buildings, in an effort to “cast a wide net,” said William Strawn, spokesman for the Department of Building Inspection. At the time, he said that already “a couple of thousand of these probably have been retrofitted.”

The letters told landlords they must have their properties inspected by engineers or architects qualified in earthquake safety.

The new total of 4,806 buildings that have been deemed unsafe and needing retrofits shows a much more widespread problem than previously thought. The ordinance itself cited an estimate of “at least 2,800 buildings.” That was based on a rough analysis by engineers and inspectors, who arrived at that total after conducting sidewalk surveys, as part of the city’s Community Action Plan for Seismic Safety.

The report found concentrations of vulnerable buildings across the city, “most notably in the Mission, Western Addition, Richmond, North Beach, and Marina neighborhoods.”

Strawn did not comment on whether the large number of verified vulnerable buildings had surprised city staff. “The program is providing us with more accurate data,” he said.

As San Francisco’s legislation was being prepared last year, a scientist for the U.S. Geological Survey told the Public Press that an earthquake of at least magnitude 6.7 had a 63 percent chance of hitting the Bay Area by 2038, according to the latest projections.

The earthquake centered on Napa County on Aug. 24 was the largest since 1989. It measured at a 6.0 magnitude, USGS reported, and caused hundreds of millions of dollars in damage and numerous injuries.

To properly brace for the next major earthquake, San Francisco’s Department of Building Inspection estimates that landlords will have to spend between $60,000 and $120,000 on each building’s retrofit.