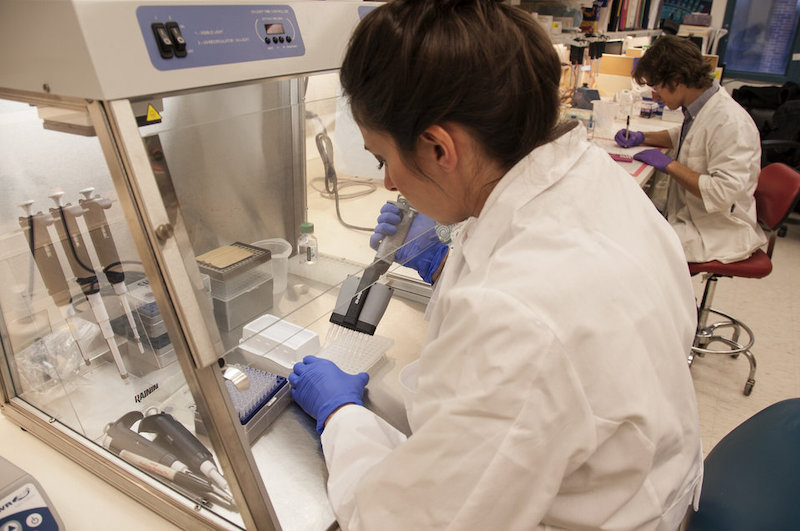 Jessica Lo Surdo, M.S. (foreground), a staff scientist at the Food and Drug Administration, studies chain reactions in stem cells in an FDA laboratory on the National Institutes of Health campus in Bethesda, Md.

Jeff Sheehy has been a lonely voice on the board of the California Institute for Regenerative Medicine, where he stands in opposition to the state ballot measure that would fund the organization for years to come.

Proposition 14 asks California voters to approve a $5.5 billion bond to allow the institute to continue to provide grants for stem cell research, with the goal of creating new treatments for some of medicine’s most intractable problems.

The California Institute for Regenerative Medicine broke new ground in 2004 when voters passed Proposition 71, which gave the organization $3.5 billion to fund research into embryonic stem cells. At the time, the Bush administration had halted all funding into stem cell research and even prevented labs that had received any federal grants from doing the research. Anti-abortion activists opposed the idea of harvesting unused stem cells from in-vitro fertilization clinics.

Proponents hoped that California would become a center for such research, which it did. However, miracle cures were not just a decade away. While the field has advanced, the money from the first bond failed at its promises to mend broken spines, cure Parkison’s Disease and end the scourge of Alzheimer’s.

Sheehy acknowledges the good that was done in advancing research, even without the miracles, but says that with federal research funding restored and the private sector providing additional resources, California no longer needs to use general fund money to pay for expensive grants.

“I’m proud of my time on the board. I’ve been on the board of CIRM, since 2004, for its entire history, and we really filled a huge unmet need. We filled a gap. We were historic, we did a good job, we moved science forward. But the reality is, we’re not needed anymore. We did our job.”

You can listen to our interview with Kevin McCormack, senior director for public communications and patient advocate outreach at the California Institute for Regenerative Medicine, who spoke in support of Proposition 14 in August last year.