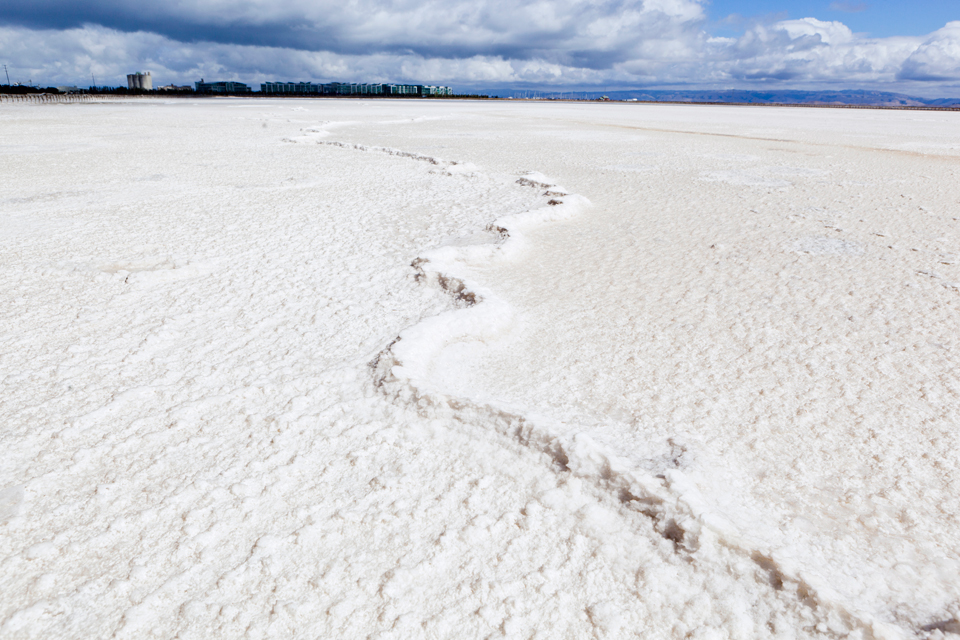 One of Cargill’s 109-year-old salt crystallization ponds in Redwood City. These ponds are the final stop in a five-year salt-making process that involves moving bay water through a series of evaporation ponds. In these ponds the highly saline water completes evaporation, leaving 8-12 inches of solid crystallized salt that is then harvested for industrial use. Photo by Ian Umeda/FishBird Productions.

A wide dirt road cuts through the middle of the large, multi-hued salt harvesting ponds that stretch as far as the eye can see. Except for a few heavy trucks that trundle past, and a couple of ramshackle buildings, not much sign of human activity is visible on this stark, sweeping landscape in Redwood City, on the southern fringe of the San Francisco Bay.

Since 1901, a natural evaporation and crystallization process has produced salt from bay waters in these shallow ponds. But now plans to develop this 1,436-acre piece of property has set off an intense debate on how and where to house the Bay Area’s growing population in an era of climate change and rising sea levels.

Agribusiness giant Cargill, which owns the ponds, has teamed up with Arizona developer DMB Associates to propose an expansive development on the site. The project, which they promote as a “50/50 balanced plan,” envisions a mass transit-oriented community of 8,000 to 12,000 low-rise, energy efficient apartments, schools, office spaces and shopping centers mixed with 368 acres of open space and 436 acres of restored wetlands.

“This is an ideal smart growth proposal because the peninsula is where job growth is and it’s where we have a huge jobs-housing asymmetry,” says project architect Peter Calthorpe, who is considered a pioneer in the field of sustainable urban development. “I think smart growth in the Bay Area operates at many levels, but at the most basic level, it has to do with housing our own workforce instead of pushing them out into the Central Valley and beyond.”

The Saltworks project fits all of these criteria. It plans to put 30,000 people close to the Bay Area’s job centers in walkable communities that would be served by transit links from Redwood City’s proposed ferry terminal to its Caltrain station and the planned high-speed rail system. It would help reduce commutes of a portion of the 200,000 people who drive into the Bay Area for work every day.

But opponents say the location and the nature of the land makes it a dumb place for a smart growth project.

While DMB officials describe the site as a “heavily engineered,” barren “moonscape” with no wildlife, it is in fact, a minimally developed open space separated from the Bay by three- to four-foot levees. Also, ample evidence proves the ponds provide habitat for shorebirds and other animals during certain stages of the salt crystallization process.

The mostly sea-level ponds also fall within an earthquake and flood risk zone and project opponents say the best thing to do is restore them to the tidal marshes they originally were. That is being done with over 16,500 acres of former Cargill salt ponds that the company sold to the state and federal government in 2002 for $243 million in cash and tax credits.

Coastal wetlands act as a natural buffer against rising tides and storm surges, and are crucial wildlife habitats. They serve as perpetual carbon sinks — absorbing carbon dioxide from the atmosphere and storing it indefinitely.  Tidal wetlands are particularly important as carbon sinks because unlike freshwater wetlands and decomposing trees, they don’t emit methane, a potent greenhouse gas.

“Scientifically, it makes a lot more sense to restore the wetlands and leave them as buffer zones to protect for developments further inland,” says Rainer Hoenicke, ecologist and executive director of the San Francisco Estuary Institute, a nonprofit that offers “impartial scientific interpretations” to aid environmental planning and policy development.

The Saltworks project location doesn’t seem to offer any flexibility to respond to sea level rise, he said. “Ideally, you would want to have a sufficient buffer to minimize risks to life and property,” Hoenicke said.  “As sea level rise scenarios become more precise in the next few decades, it will be expensive enough to come up with protection strategies of valuable existing infrastructure, let alone add to vulnerabilities that could be avoided in the first place.”

State and federal agencies including the state water board and the U.S. Environmental Protection Agency, have weighed in on the matter, stating the salt ponds are a critical biological resource that should be protected.

Some 140 local elected officials and several major environmental groups including the Center for Biological Diversity, Audubon Society, Sierra Club and Save the Bay, have added to the growing chorus of opposition to the project.

“There aren’t very many places left that are unprotected that can be restored. This is one of the few and the Bay needs all the places it can get,” said Dave Lewis, executive director of Save the Bay, the Oakland-based nonprofit that has been leading the charge against the Saltworks project.

Since the Gold Rush, about 40 percent of the San Francisco Bay has been diked, drained and converted into real estate and an estimated 90 percent of the regions’ wetlands (193,800 acres) have been filled in. Only about 44,000 acres of healthy tidal marsh exist today. Scientists project at least 100,000 acres of wetlands are required around the Bay to support a healthy, sustainable eco-system. State and federal agencies have acquired 32,0000 acres of restorable shorelines and are working to convert them into mixed intertidal habitat.

However, Redwood City is going ahead with an environmental impact review for the project and is considering re-zoning the property for development. If approved, the Saltworks development would be  the largest Bay fill approved since state and federal agencies began regulating shoreline development in the 1960s.

DMB officials and Calthorpe say it’s a positive, climate-friendly trade-off since it would cut greenhouse gas emissions from transportation, which causes about 50 percent of the Bay Area’s carbon emissions. The project, they say, is in keeping with California’s landmark 2008 anti-sprawl law, SB 375, that went into effect in late September and requires regional governments to devise a growth plan that reduces dependence on automobiles.

Yet little proof exists that building a high-density, energy efficient development along the waterfront would  help mitigate global warming  impacts rather than exacerbate them by destroying the opportunity to restore the land to tidal marsh.

It’s a question that many bayside communities in the region are grappling with as they try to figure out how to house an estimated 1.6 million new residents over the next 25 years.

The Regional Housing Needs Plan for the Bay Area estimates the nine-county region will need at least 700,000 new homes by 2035.

A study by smart growth advocates, Greenbelt Alliance, shows cities can meet this demand through infill development, which involves building on vacant lots and redeveloping blighted urban areas. But redevelopment is a slow, painstaking process of which many planners and developers are wary.

Calthorpe, for instance, openly admits that “big projects like the ones in Treasure Island, Alameda Point and the Saltworks, are easier for smart growth.”

Ironically, all the projects he mentions involve putting up thousands of homes by the Bay in clear contradiction of California’s 2009 climate change adaptation strategy that recommends: “State agencies should generally not plan, develop, or build any new significant structure in a place where that structure will require significant protection from sea level rise, storm surges, or coastal erosion during the expected life of the structure.”

The Bay Area is especially vulnerable to sea level rise. The San Francisco Bay Conservation and Development Commission estimates about 270,000 people will be at risk of flooding and shoreline property worth $64 billion could be damaged if sea levels rise by 55 inches by the end of the century as some studies project. More recent studies suggest a possible 72-inch rise by 2100.

The commission is proposing amendments to its governing document — the San Francisco Bay Plan — to incorporate climate change adaptation policies that would give it more power to regulate development around the Bay. But as of now, the commission has jurisdiction only over development within a 100-foot strip along the Bay shoreline.

That’s part of the problem when it comes to figuring out where to build in the Bay Area.

Though a growing body of scientific opinion recommends climate change adaptation strategies that involve retreating from the Bay, few legal regulations regarding building by the waterfront have been written. The commission’s proposed policy amendments, which would extend areas under its purview and impose a wide range of restrictions over bayside development, has already created a furor among local developers and planners. They fear  those amendments could scuttle or hold up development projects across the Bay Area if adopted.

Back at the Saltworks site, DMB spokesperson Jay Reed says they will build strong levees 86.4 inches high, or just over seven feet – to cover for even the most extreme sea level rise predictions, and they’ll build them wide — as wide as  300 feet so that it can be raised  if necessary. And they will build per Federal Emergency Management Agency regulations.

“There is no solid levee. It’s only as solid as it has to be to pass current regulations,” said UC Berkeley environmental planning expert John Radke, who’s researching the risk climate change poses to Bay Area infrastructure.

“My argument is why even consider putting a development around a piece of land that would need a levee to keep water out? The Dutch do it because they have to.  We don’t. There are other places where we can build,” he said.

A version of this article was published in the fall 2010 pilot edition of the San Francisco Public Press newspaper. Read select stories online, or buy a copy.