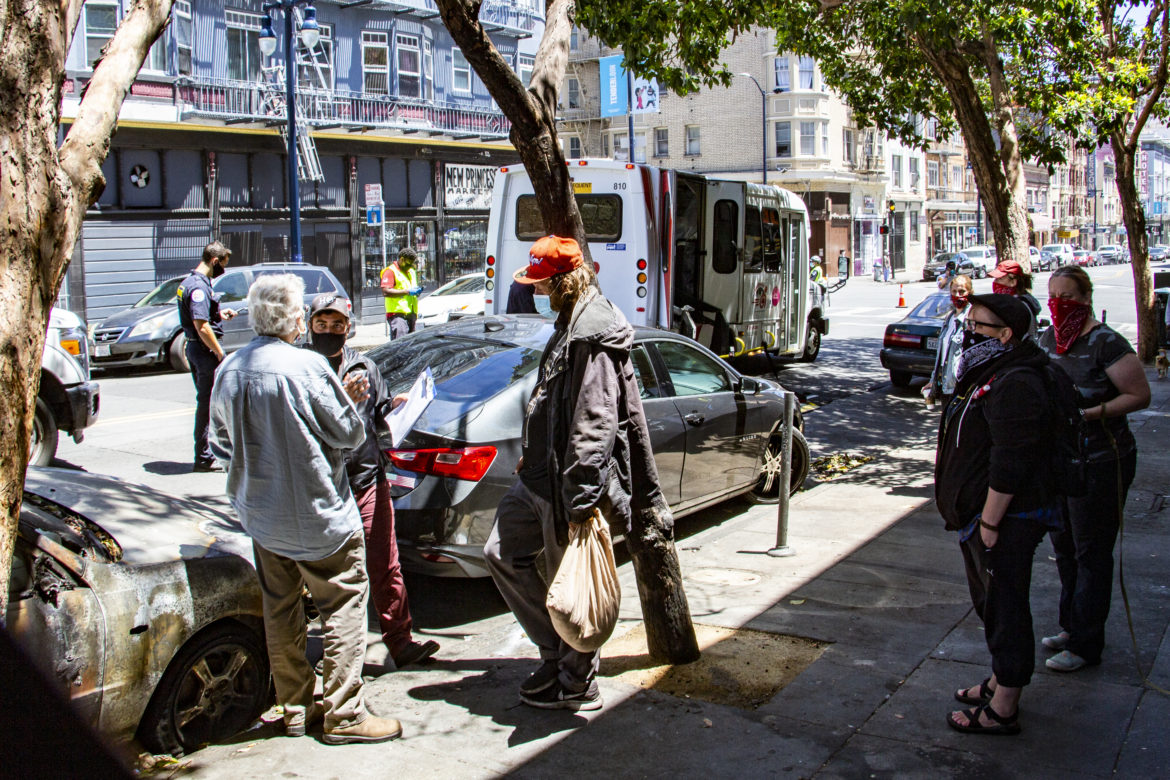 A potential client (center) discusses hotel placement options with a Homeless Outreach Team member and several service providers. A new budget proposal from a coalition of organizations would increase funding for various housing and homelessness programs over the next two years. Brian Howey / Public Press

As San Francisco leaders look for ways to slash spending in the face of a huge budget shortfall, a coalition of homeless service providers is asking for an increase in funding over the next two fiscal years to address an expected surge in demand due to economic fallout from the coronavirus pandemic.

The money would fund subsidies that could help house hundreds of individuals and families, bolster emergency shelters and homelessness prevention programs, and jumpstart the city’s first safe drug injection site — provided Assembly Bill 362,  which would permit pilot versions of such sites, survives the state Legislature this year and is signed into law by Gov. Gavin Newsom.

“We all understand that this is a tough time for our city’s revenue and budget, but it’s also a very tough time for our residents,” Supervisor Matt Haney, whose district is home to many of the city’s unhoused residents, said about the proposal. “If we don’t invest in prevention and make sure that the most vulnerable people are taken care of, it can get much worse quickly.”

The service providers’ association has won funding for its members and the Department of Homelessness and Supportive Housing in the past, including more than $24 million in funding for various programs in the last fiscal year.

Given the city’s fiscal challenges, the association may face an uphill battle persuading the mayor’s office to fork over the funds this time around. San Francisco is grappling with a looming $1.5 billion budget deficit and the mayor has requested across-the-board cuts to city departments, including the Department of Homelessness and Supportive Housing.

“Even in the best of circumstances, it’s always a long shot,” said Joe Wilson, executive director of Hospitality House homeless shelter and co-chair of the Homeless Emergency Services Providers Association, the group that authored the proposal. “As we see it, this is the time to invest in prosperity for the future rather than rely on austerity measures.”

“We’re kind of moving forward with business as usual and unfortunately, a lot of the programs that are on the chopping block are going to have really negative repercussions for Black and brown families, who are disproportionately the ones experiencing homelessness,” she said. While San Francisco’s population is roughly 6% Black, 37% of its homeless population is Black.

Breed’s media liaison, Andy Lynch, said her office will release this year’s budget proposal Friday. Though she asked the homelessness department to propose cuts, “that does not necessarily mean that those cuts will all be accepted or included in the Mayor’s budget proposal or the final budget,” Lynch said, adding that Breed had announced “the largest expansion of permanent supportive housing in 20 years” the previous week. Part of that plan is to open 1,500 new supportive housing units of over the next two years.

The homelessness department did not respond to requests for comment for this story.

The city could pay for the proposition with funds diverted from the police and sheriff’s departments’ $700 million budget or philanthropic donations from the more than $90 billion held by the city’s 37 resident billionaires, Wilson said.

Another funding source, Bacalao said, would be Proposition C funds.

When those will become available is another matter. The battle over the contentious business tax, approved by voters in 2018 to fund housing and homelessness programs, heads to the California Supreme Court next after the California First District Court of Appeal ruled the tax legal.

“The funds will be released if the City is ultimately successful at the close of litigation,” Alyssa Sewlal, communications manager at the Office of the Controller, wrote in an email. “Or until another potential means of paying refunds arises, should the City not prevail in the litigation.”

Breed and the Board of Supervisors recently approved a workaround law, headed for the November ballot, that would free up the funds in the event the city loses in court.

Jen Snyder, Supervisor Dean Preston’s chief of staff, said her office supported both the mayor’s plan and the association’s budget requests, though the board of supervisors has little say in whether the city will grant the proposal.

“We’re going to have to make some big decisions if we want to actually address the homelessness crisis,” Snyder said. “We’ll just have to see what happens” when the city releases the budget. Supervisor Rafael Mandelman aide Tom Temprano also voiced his office’s support for the budget.

Preston, Mandelman, Haney, Hillary Ronen and Shamann Walton’s districts contain the majority of the city’s homeless population. Ronen and Walton did not respond to requests for comment by press time.

“I hope these types of interventions are prioritized in the mayor’s budget,” Haney said. “If they’re not, I’ll fight to make sure they’re added back in.”

Here is a breakdown of the programs the proposal would fund: